Hazell to Play in Summer League With Hawks

“Yes, Mr. King,” Williams said with a smile as he left the gym.

Williams is expected to opt out of his contract with the Nets by July 1 but attended the team’s workout for college players on Saturday wearing Brooklyn Nets gear and was back here Monday sitting next to King watching a group of 21 players that included Adam Morrison, the No. 3 pick in the 2006 NBA Draft.

Stephen A. Smith on SNL

Stephen A. Smith made a rare guest

In case you missed it, Mick Jagger 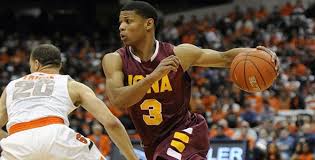 EAST RUTHERFORD, N.J. — Former Iona point guard Scott Machado was the most impressive guard in the building Saturday when 44 draft eligible players worked out for representatives of all 30 NBA teams.

Machado proved perfectly capable of running an offense, penetrated into the lane at will and did most of it at the expense of explosive Xavier guard Tu Holloway, another diminutive guard looking to secure draft positioning.

UNLV-Bound Bennett Erupts for Double-Double at IS8

NEW YORK — Playing in his first event since signing a Letter of Intent with UNLV on Tuesday, Anthony Bennett  went off for 24 points and 10 rebounds at the IS8 Nike Spring Classic in Queens.

The 6-foot-8 Bennett threw down five dunks — several from three or four feet above the rim — as the New York Panthers beat the Playaz Sophomores, 72-44, to advance to the quarterfinals on Sunday.

Bennett went a perfect 7-for-7 from the line and also had two blocks.

“He was a man,” longtime New York recruiting expert Tom Konchalski told SNY.tv. “He played terrific. He was clearly the best player there today.”