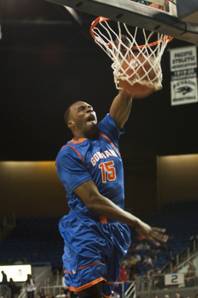 Shabazz Muhammad is headed to visit Kansas after putting on a magnificent performance in the state championship game. The 6-foot-6 swingman scored 30 of his game-high 36 points Friday night to lead Las Vegas Bishop Gorman to a 96-51 victory over Reno Hug High School in the Nevada 4A state championship game. Muhammad outscored Hug, 30-25, and only missed one shot in the first half en route to leading Gorman to its third state title in four years. “The first half was quite a display,” Gorman coach Grant Rice told the Las Vegas Sun. “Shabazz will be the first to say, he gets the spotlight because of his scoring, his highlight dunks and his rankings, but we don’t win this championship without all these guys. We don’t even come close.” This Gorman team also features Stanford-bound big man Rosco Allen, UNLV-bound forward Demetris Morant and Rashad Muhammad, Shabazz’s brother. “I think it is (the best team in state history),” Muhammad said. “Our team was really good. We had (players sized at) 6-9, 6-6, 6-7, our team was basically an NBA team with length. It was just a good situation for us. We came out tonight and brought it one last time.” Gorman was upset in last year’s state semifinals by Reno’s Bishop Manogue High. Muhammad will wake up Saturday and fly straight to Kansas for the Jayhawks’ 3 p.m. Central Time tip against Missouri in a game that could decide the Big 12 championship. “Coach [Bill] Self has always been a great coach and heads a great program,” Ron Holmes, Muhammad’s father, told SNY.tv. “They have been recruiting Shabazz since he was a freshman. We’re looking forward to seeing the atmosphere in Lawrence for a big game.” Kansas will also host uncommitted 6-8 Brewster (N.H.) Academy forward JaKarr Sampson, as well as commits Perry Ellis, Brannen Greene and Conner Frankamp. Louisville coach Rick Pitino said earlier this year that Phog Allen Fieldhouse was the most “overpowering” building in college basketball. Muhammad still plans to take an official to Duke March 3 for the North Carolina game. Amile Jefferson of Philly Friends Central will also visit Duke that day, SNY.tv reported Thursday. Muhammad is mulling Duke, Kansas, UCLA, UNLV, Arizona and Kentucky and has said he expects to announce in April. “I don’t think I’m that close at all,” Muhammad told ESPNU after he was named a McDonald’s All-American. “I really haven’t been looking at it. Just been working on this season for high school, but when I get down to it it’s going to be really stressful for me. But I’m just going to talk to my family and talk it over with them.” Photo: Las Vegas Sun

Hobbs: Willard Has Seton Hall Ahead of Schedule

Irish's Brey In Line For Fourth Coach of the Year Honor