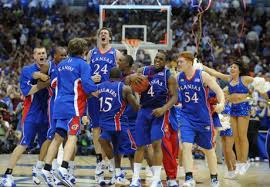 Louisville coach Rick Pitino says Kansas’ Allen Fieldhouse is the most “overpowering” arena in college basketball. “The only place I have found that to me was overpowering was Kansas,” Pitino said Thursday on the Big East con call. “Now, I have not taken a team to Duke. There really is not any place I’ve entered where it’s, ‘God, that’s just incredible, what an advantage that is.'” He added, “There are some overpowering places, in terms of the amount of people, like Rupp Arena’s overpowering.” Just ask Baylor about Kansas. The Jayhawks beat the previously unbeaten Bears 92-72 at Allen Fieldhouse on Monday night, becoming the lone unbeaten team in Big 12 league play. Pitino was asked by a Syracuse writer about going into the Joyce Center at Notre Dame because the No. 1 Orange play there Saturday. “I don’t think the Joyce is any more difficult than any other place, to be honest with you,” Pitino said. “The only place I’ve found [is Kansas] and that could’ve been I was playing with four walk-ons and lost by 50 points, so maybe that was the reason I felt that way.” FREE THROWS Pitino added that he’s unsure if Kyle Kuric (ankle) would play Saturday at Pitt. “I don’t think we have an identity because we’ve had so many different lineups, so right now we’re just trying to survive and win and we’ll keep on doing that,” he said.