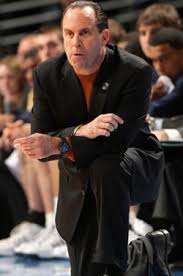 NEW YORK — When Tim Abromaitis went down for the season with a torn ACL during a practice on Nov. 25, Notre Dame coach Mike Brey’s first thought was, “I wanted to see if I could redshirt. Could I redshirt [too]?” Things did not bode well for the Irish, who had already been picked ninth in the Big East Preseason Poll even before they lost their Preseason All-Big First Team guard. But here we are three months after the Abromaitis injury and — surprise, surprise — the No. 20 Irish are in position for a double-bye in the upcoming Big East Tournament and a high seed in the NCAAs. Brey, meantime, must be considered a favorite for his fourth Big East Coach of the Year honors since 2007 and second straight. Think about that. That would be four Coach of the Year honors in a six-year span…in arguably the toughest conference in the country. “He is going on his potentially fourth time of being Coach of the Year in the Big East,” acting St. John’s coach Mike Dunlap said of Brey after the Johnnies snapped Notre Dame’s nine-game winning streak, 61-58, at Madison Square Garden. “He’s the prime candidate for that along with coach [Jim] Boeheim so that just speaks for itself.” Despite the loss, the Irish are 20-9, 12-4 in the league, good for third place at the moment behind Syracuse and Marquette. They are the only team in the nation to beat Syracuse this year and during their nine-game streak the Irish also beat likely NCAA Tournament teams Marquette, Seton Hall, UConn and West Virginia (twice). How have they done it? Without Abromaitis, others stepped up and channeled their energies toward the team concept that Notre Dame under Brey has become known for. Sophomore guard Jerian Grant entered the game averaging 13.1 points, sophomore guard Eric Atkins 13 points and junior forward Jack Cooley 12.2 points and 9.2 rebounds. Guys like Scott Martin (9.1 ppg, 5.7 rpg) and Alex Dragicevich (7.1) have also stepped up. Cooley has earned one Big East Player of the Week Award and both Grant and Pat Connaughton have garnered Rookie of the Week honors. “Man, when that [Abromaitis injury] went down it affected Scott for a good six weeks,” Brey said. “But it was a great atmosphere to coach in. There was no attention. We were done. Wait till next year. We were really poor. And we have good kids who hung in there and wanted to get better.” Said Cooley: “Our program has played with adversity such as that that before,” Cooley said. “The year when Luke [Harangody] went down [2009-10], we lost Scott that same year, too. So we fought through all that adversity, we just know. Coach just  knows how to coach us when we’re a man down and we know how to play like that.” With 131 Big East wins entering this game, Brey ranks behind only Boeheim (399), Jim Calhoun (309), John Thompson (231) and Lou Carnesecca (139) on the all-time conference wins list. All four of those men are in the Naismith Hall of Fame Who’s behind Brey on the list? Some pretty good coaches named Rollie Massimino (123), Jamie Dixon (113), Jay Wright (111) and Rick Pitino (103). Brey has produced three Big East Players of the Year during his tenure — Troy Murphy (2001), Harangody (’08) and Ben Hansbrough (’11). And every time one of those players leave, the expectation is that the Irish will somehow fall off. But even with Hansbrough now playing professionally in Europe and Abromaitis sidelined, the Irish are right back in the mix for a Big East tournament title. Think anyone wants to play them beginning March 8 at Madison Square Garden?

St. John's Could Be Dangerous in Big East Tourney