Carolina’s Barnes Cruising On All Cylinders 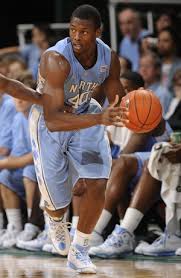 CHAPEL HILL, N.C. — Looking back on it, the weight and expectations placed on Harrison Barnes before he even suited up for the University of North Carolina as a freshman last season were unfair and they weighed on him early in his rookie campaign. Barnes was a highly-decorated high school player out of Ames (Ia.) High School. A McDonald’s All-American in 2010, the 6-foot-9, 210-pound swingman was the USA Today National Player of the Year and a consensus first-team All-American a year after being named The Sporting News National Player of the Year as a junior. Over his final two years of high school, Ames went 53-0 and won back-to-back state titles. After all the accolades and all the hype, Barnes was named an Associated Press Preseason All-American as a freshman. For perspective, no freshman had ever been named an AP Preseason All-American as Barnes was. He was then looked upon to shoulder much of the load for head coach Roy Williams. It took Barnes a while to get comfortable and figure everything out at Chapel Hill under the bright lights of major college basketball, but for all intents and purposes, he has done just that. Now, about midway through his second season, Barnes has continued to morph into the team-leading star everyone thought he would be. He’s more efficient with his shooting, he’s smarter with the ball in his hands and all of his steady play has helped the Tar Heels emerge once again as a national title contender. “I definitely had to change my game a little coming out of high school because not only was I trying to adapt to the defenses I was facing, but I had to get used to good teammates like John (Henson) and ‘Z’ (Tyler Zeller),” Barnes said. “Another thing was mixing up point guards, going from Larry (Drew II) to Kendall (Marshall), so getting used to all of that took a while.” Barnes has adapted as necessary and UNC is better for it. The latest example came on New Year’s Day when the projected NBA lottery pick scored 20 points on 8-for-14 shooting in just 22 minutes of a 102-65 win over Monmouth at the Dean Smith Center. The 8-for-14 showing is his ninth game of shooting at least 50 percent from the field and his 13th game in double figures. That type of consistent strong play has benefitted the 13-2 Heels and will be needed moving forward when they open always-rugged ACC play on Saturday against Boston College. “We’re in a good position right now. We’ve done some good things in pre-conference play and the biggest thing now is to keep building, you never want to regress,” Barnes said. “Hopefully, we can continue to play with good habits, start games off strong and with energy. If you do that, it’s usually easier on the back end.”