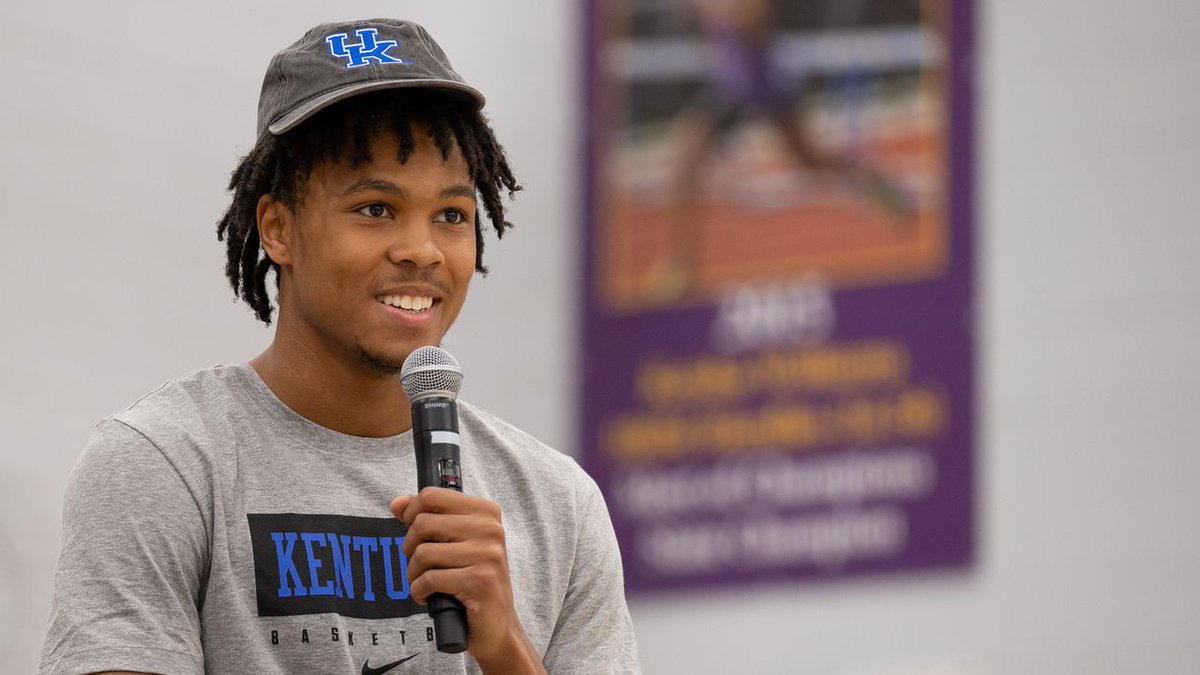 By ADAM ZAGORIA More than two years ago, Kentucky coach John Calipari added Kareem Watkins as a walk-on to his basketball team. Watkins, listed at 5-foot-8 and 175 pounds, just happened to be the stepson of Dajuan Wagner, the former Camden High School great who played for Calipari at Memphis, and the stepbrother of D.J. Wagner, the No. 1 recruit in the Class of 2023. “Kareem is a great kid with a terrific work ethic who is going to be a great addition to our team,” Calipari said then. “Kareem knows our expectations of him. We want him to come in here and be a great teammate and help us in practice. His stepfather, Dajuan, who played for me at Memphis, has really instilled a drive in Kareem and I look forward to seeing him continue to develop here with family.” Two years later, Watkins has only appeared in a handful of games for Kentucky, but his presence on the roster paid huge dividends this week when D.J. Wagner signed with Kentucky, cementing the Wildcats No. 1-ranked recruiting class. “It was a place I felt comfortable at, it felt like at home,” Wagner said Wednesday during a signing ceremony at his school that included his Camden teammate, 7-foot-2 big man Aaron Bradshaw. “I got family that goes there, and a lot of people there that support me, and I know that support me. So really just how comfortable I was being out there and being down there and the home environment feeling.”

DJ Wagner talks about his decision! JSZ was on hand in Camden as Wagner spoke with the media about his Kentucky commitment for the first time.

Earlier this year, Louisville coach Kenny Payne made news when he hired Milt Wagner, D.J.’s grandfather and a former Louisville legend, as Director of Player Development and Alumni Relations. At that time, many in the recruiting world believed that meant D.J. was a lock to Louisville. But Calipari, a master recruiter, had already added a member of the Wagner family back in November 2020. He had also coached Dajuan in college and told him he had to leave after his freshman season, when he became the No. 6 pick in the NBA Draft. Calipari and the Wagner family have remained tight ever since. “I have known D.J. his entire life and I’ve always wanted to coach him,” Calipari said in a statement. “Above all he is a competitor. He attacks the offensive end and is a versatile scorer, but he is equally as tough on defense. I love the spirit he’ll bring to practice every day, and I love that he wanted to be at Kentucky. He knows that to get the best of himself, he needs to be surrounded by other talented players who are going to match his competitive energy.”

The fact that the Kentucky roster already included junior forward Lance Ware, a Camden product, and will also include Bradshaw also helped bring D.J. to Kentucky. “That’s very special, that’s my brother right there, so being able to go to the next level with him played a big part in going there because any time I get to play on the court with any of my brothers…is when I feel like is the best time to play,” D.J. said of Watkins, while also alluding to Bradshaw. “And these are some of the best years of my life, playing with them. So going to the next level being able to play more with another one of my teammates definitely played a big factor.” The future looks bright, too. As my NJ.com colleague Kevin Armstrong wrote this week in a story on Book Richardson: “[Wagner] already has an NIL deal with Nike, representation from William Morris Endeavor and could command a seven-figure income even before his name is announced as a starter at Rupp Arena.” Still, the immediate future remains cloudy for Wagner and his teammates. Kevin Armstrong of NJ.com reported this week that Camden could “face serious and wide-ranging penalties” Dec. 5 when it appears at a hearing before the New Jersey State Interscholastic Athletic Association’s Controversies Committee. “The public school stands accused of loading its basketball roster with star players and top recruits from across New Jersey who did not reside in Camden,” Armstrong wrote. “If found guilty of wrongdoing, the state could take the unusual and severe step of stripping the team of its 2022 state championship and banning Camden from the 2023 postseason, according to a source familiar with the process.” Some top New Jersey high schools have already opted not to play Camden this season, while others are waiting for the fallout. On Wednesday, Wagner and his teammates were focused on the signing ceremony and looking ahead to the season. “We definitely plan on having a lot of fun,” Wagner said. “This is our last year, we still got a lot of basketball left to play. We definitely can’t wait, we’re definitely excited, we plan on having a very successful year, just enjoying our time with each other like we always do.” Photo: Dave Hernandez/ NJ Advance Media Follow Adam Zagoria on Twitter Follow ZAGSBLOGHoops on Instagram And Like ZAGS on Facebook