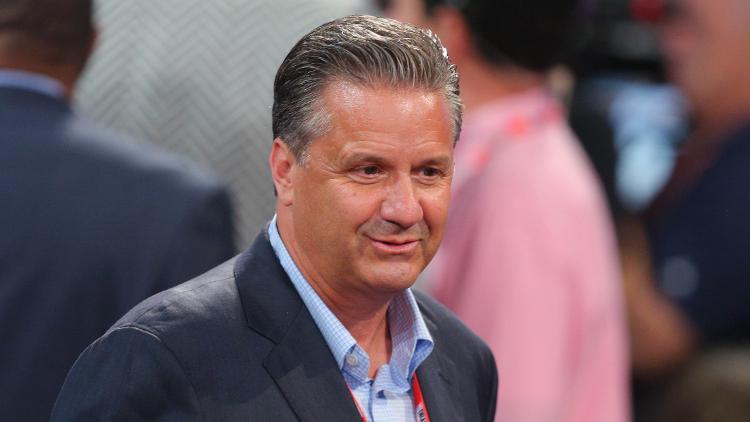 Kentucky announced Tuesday that it had added Kareem Watkins as a walk-on. A freshman point guard, Watkins finalizes the 2020-21 roster at 15 players. Freshman walk-on Isaac DeGregorio left the team last week due to personal reasons. Watkins is a 5-foot-8, 145-pound guard out of Camden, N.J. His stepfather, Dajuan Wagner, starred at Memphis under Kentucky head coach John Calipari. Averaging 21.2 points per game, no player has ever averaged more points per game under Calipari than Wagner, Calipari’s first one-and-done player. D.J. Wagner, Dajuan’s son and Kareeem’s brother, is the No. 1-ranked player in the Class of 2023. “Kareem is a great kid with a terrific work ethic who is going to be a great addition to our team,” Calipari said. “Kareem knows our expectations of him. We want him to come in here and be a great teammate and help us in practice. His stepfather, Dajuan, who played for me at Memphis, has really instilled a drive in Kareem and I look forward to seeing him continue to develop here with family.”

Watkins played at Kingsway Regional High School in Camden. He played in 26 games his senior season and averaged 8.7 points per game. A point guard with excellent shooting range, Watkins scored in double figures in 11 games in his senior season with multiple 3-pointers in 12 games. He is a skilled passer and dished out four or more assists in 14 games in addition to three or more steals in 10 games. “These last few days have been surreal,” Watkins said. “I grew up wanting to play basketball on the college level. To have the opportunity to do so at a place like Kentucky and under a Hall of Fame coach like John Calipari is a dream come true. I understand what the expectations are of me. I’m excited to come in and be a part of this team and work hard every day to help my teammates and this team chase its goals.” Watkins scored a season-high 19 points on six made 3-pointers vs. Woodstown with four assists. He also posted 16 points, five rebounds and four assists at Clearview and recorded 15 points, six boards and five dimes vs. Cumberland. He will join the team after undergoing COVID-19 testing protocols.  Watkins is a part of the 2020 freshman class, the consensus No. 1 group in the country, which features six consensus five- and four-star prospects, including top-10 signees Brandon Boston Jr. and Terrence Clarke. The Wildcats also signed Wake Forest transfer Olivier Sarr, Creighton graduate transfer Davion Mintz and Rhode Island transfer Jacob Toppin. Sarr and Toppin were recently ruled immediately eligible. (Release via Kentucky) Follow Adam Zagoria on Twitter Follow ZAGSBLOGHoops on Instagram And Like ZAGS on Facebook