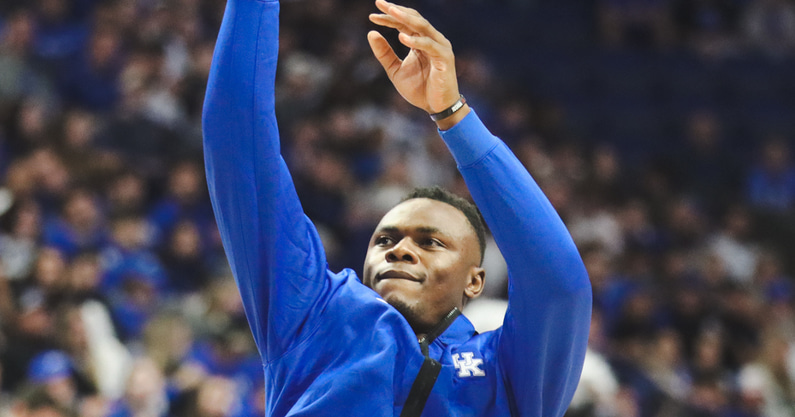 By ADAM ZAGORIA Reigning national player of the year Oscar Tshiebwe will play “some” for No. 4 Kentucky against Michigan State Tuesday night in the Champions Classic, a source close to the situation said. Tshiebwe has not played this season after recovering from a procedure on his right knee last month. On Monday, Kentucky coach John Calipari said CJ Fredrick and Antonio Reeves would get more looks from outside if Tshiebwe played. “Not if Oscar’s in there,” Calipari said. “You’ve got your choice. Don’t let them touch it, stay out there and let Oscar go one-on-one. And then you trap it and Oscar has been a pretty good passer. So, he makes it different.” Last season, Tshiebwe, a native of the Democratic Republic of Congo, averaged 17.4 points and 15.1 rebounds last season. Sophomore forward Daimion Collins, who also missed the first two games of the season after the death of his father Ben, is also expected back. “I would expect Daimion to play, yes,” Calipari said. “He practiced Wednesday and Thursday of last week and he practiced Monday and he’ll practice today so I would say he’s good to go.” More than 75 NBA scouts are expected at the Champions Classic, which also features No. 6 Kansas vs. No. 7 Duke. Follow Adam Zagoria on Twitter Follow ZAGSBLOGHoops on Instagram And Like ZAGS on Facebook