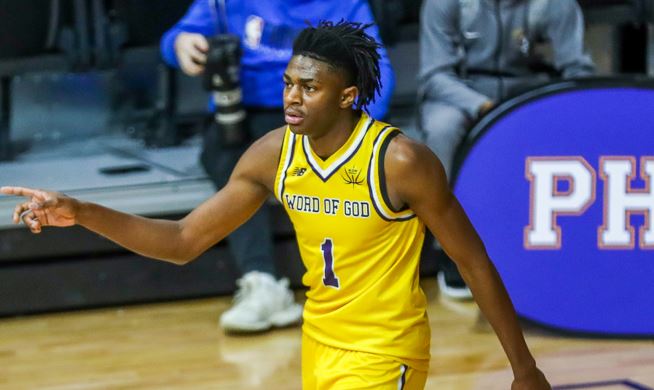 By ADAM ZAGORIA Brandon Gardner, the 6-foot-7, 208-pound power forward from Raleigh (NC) Word of God, announced his commitment to St. John’s on Monday. Ranked the No. 14 power forward in the Class of 2023 in the 247Sports.com Composite, Gardner chose the Red Storm over LSU, Auburn and Georgetown. “St. John’s, I love the coaching staff, the way they play,” he told ZAGSBLOG ahead of his announcement. “I love the fast pace. I just love New York. New York is a fast-paced place, and I’m a fast-paced player. I feel like they fit my game pretty good.” As for what skillset he will bring, he said, “I can be any type of player. I’m starting to shoot the ball more. I can play-make a little bit. I can also block shots, dunk on people and I can be a leader as a freshman because of the way I play and talk.” Gardner took an official visit to St. John’s in February and was quick to say he loves New York. “The (St. John’s) fans are calling me ‘Madison Square Gardner!’” he said recently.  “That’s hard. That’s too hard. St. John’s, they play fast. I love playing fast. I’m a fast player. They work hard in practice every day, I saw that (during a recent visit).” Gardner’s friend, IMG Academy (FL) five star shooting guard AJ Storr, will soon be on campus as a freshman with lofty expectations. “That’s my boy, I was actually shooting with him a couple days ago,” he said.
“I played him first and I met him at Pangos.” He said he has no plans to reclassify to 2022 at this point. “No sir, I am not looking to reclass,” he said. “I am trying to have a strong senior year and just develop more and get ready mentally and physically for the next level.” The St. John’s staff was also at Iona Prep this weekend to watch Christ the King and PSA Cardinals Class of 2023 big man Brandon Williams, who recently visited campus. Follow Zach Smart on Twitter Follow Adam Zagoria on Twitter Follow ZAGSBLOGHoops on Instagram And Like ZAGS on Facebook