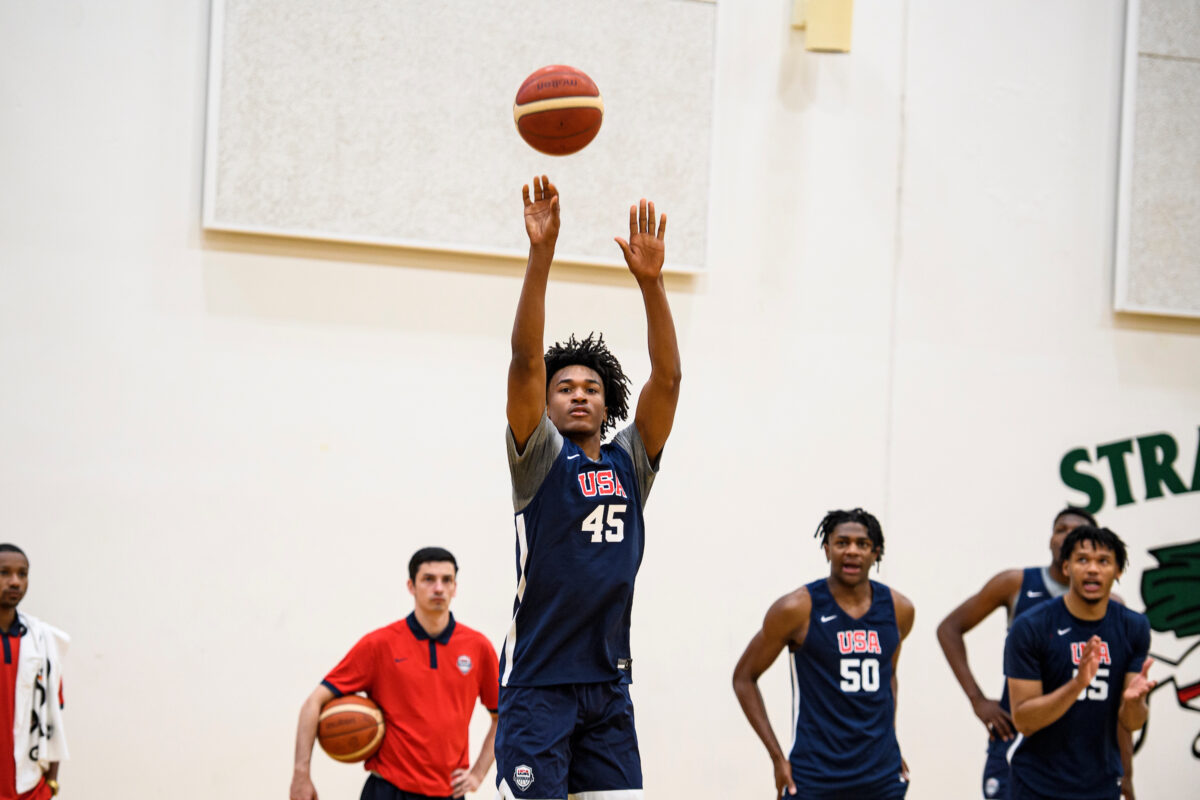 By ADAM ZAGORIA Stephon Castle has some ambitious summer plans. The 6-foot-6 point guard from Covington (GA) Newton High School is among 27 players trying to land one of the 12 spots on the USA Basketball U18 National Team that will compete at the 2022 FIBA U18 Americas Championship in Tijuana, Mexico, from June 6-12. “Just knowing everybody here is good, it’s not easy to make teams like this,” Castle said by phone Friday from training camp in Houston. “I’m just doing the little stuff more, like rebounding and playing defense with intensity.” “It would mean a lot [to make the team] because I don’t get invited to too much stuff like this,” he added.”To be one of only two from Georgia here and to make that team, it would mean a lot.” Castle, who committed to UConn in the Class of 2023 last November, is joined in training camp by fellow Georgia native Kanaan Carlyle, a Class of 2023 Stanford commit. Several other Big East recruits are also in training camp, including Class of 2022 Villanova commit Mark Armstrong Jr. of Saint Peter’s Prep (N.J.) and incoming Providence guard Corey Floyd Jr., the former Roselle (N.J.) Catholic guard who transferred from UConn. In training camp, Castle is “just trying to showcase my defense more, showing how unselfish I am.” He said he’s also been “shooting the 3-ball a lot more and a lot more efficient. That’s what’s been keeping me in the games.” Castle remains in touch with UConn coach Dan Hurley about his future role and says he’s poised to come in and help lead the team beginning in the 2023-23 season. “He wants me to come there and a be effective immediately and play the one and run the offense for him,” Castle said. UConn had three guards transfer out this offseason in Floyd, Jalen Gaffney and Rahsool Diggins while they added Virginia Tech transfer Nahiem Alleyne and ex-Texas A&M guard Hassan Diarra. “[Hurley] transferred in two senior guards so they’ll be gone by the time I get there,” Castle said. Still, he helped recruit Alleyne, a Georgia native, to UConn. “My dad played with his dad,” Castle said. “I talked to him, I got him into committing there. “He’s not my actual cousin, but we call each other cousins. We’re real close. I told him Coach Hurley is a real good coach, it’s a good fit for him.” Castle plans to play one more session of AAU on the Under Armour circuit with Atlanta Express and hopes to compete in the Under Armour finals in July. After his senior season, he wants to help Hurley and UConn compete for Big East championships and deep runs in the NCAA tournament. In 2022, UConn brings in 7-foot-1 big man Donovan Clingan. “He can be real good, hopefully he doesn’t go one-and-done, Castle said. “I think we have a real good chance [to compete], bringing in a lot of young recruits,” he added. “So I think the recruits in my age group and the ones that are coming in this year, I think we’ll have a good chance.” Photo: USA Basketball Follow Adam Zagoria on Twitter Follow ZAGSBLOGHoops on Instagram And Like ZAGS on Facebook