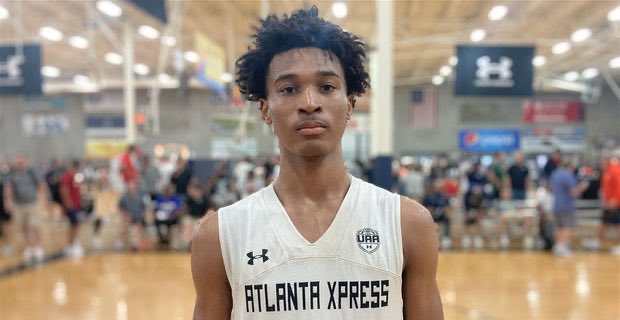 By ADAM ZAGORIA Stephon Castle has known where he was going to play college basketball for about two weeks now. After visiting UConn the weekend of Nov. 6, the 6-foot-6, 200-pound guard from Covington (GA) Newton made up his mind about his future. “I really enjoyed it, that’s when I made my decision right after my visit,” Castle said in a phone interview. Ranked the No. 4 shooting guard in the Class of 2023 per 247Sports.com and the No. 27 overall player, Castle chose the Huskies over Arkansas, Auburn, Georgia, Georgia Tech, and Ohio State. “I could relate to the coaching staff,” he said. “It’s a really good school, it’s a guard school. The coach’s pitch is that he will have [the offense] rotated around me as long as I do what I’m supposed to do on and off the court. And I could tell Coach [Dan] Hurley will really push me.” Castle said his ultimate goal is to reach the NBA. “[Hurley] told me he thinks I’m a one-and-done player so he’s going to push me to that standard,” Castle said. Castle has family in Far Rockaway, Queens, and liked that UConn “is close to my second home.” He will get to play in front of family and friends in games against St. John’s, Seton Hall and in the Big East Tournament. “I think they’re going to really enjoy it,” he said of his family. “The tournament is in Madison Square Garden, so I think they’ll really enjoy it and I’m pretty sure that I will enjoy the atmosphere with fans back.” A year ago, Castle averaged 13.8 points, 5.2 rebounds, 3.8 assists and 2.3 steals while shooting 48 percent from the field, 41 percent from deep and 78 percent from the line. “I’m going to play hard every possession, every game,” Castle said. “People like playing with me because I’m really unselfish so they’ll know that I play the game the right way.” Said Newton coach Charlemagne Gibbons: “Stephon is multi-skill point guard with great size at 6’6 and a very good athlete. He has a high basketball IQ and can really pass the basketball. “As he has continued to add strength it has increased his ability to attack the basket and rebound. He is a guy that can stuff that stat sheet in number of different ways and has a super high calling moving forward.” The UConn staff will also be in New Haven this weekend at the National Prep Showcase for 2023 prospects Isaiah Miranda of Springfield Commonwealth (MA), Papa Kante (South Kent) and Taylor Bol Bowen and Matas Buzelis of Brewster Academy (N.H.). UConn is also recruiting Imhotep Charter (PA) wing Justin Edwards, who took an official visit to Kentucky this weekend. Castle said he is working on recruiting Edwards to UConn. Follow Adam Zagoria on Twitter Follow ZAGSBLOGHoops on Instagram And Like ZAGS on Facebook