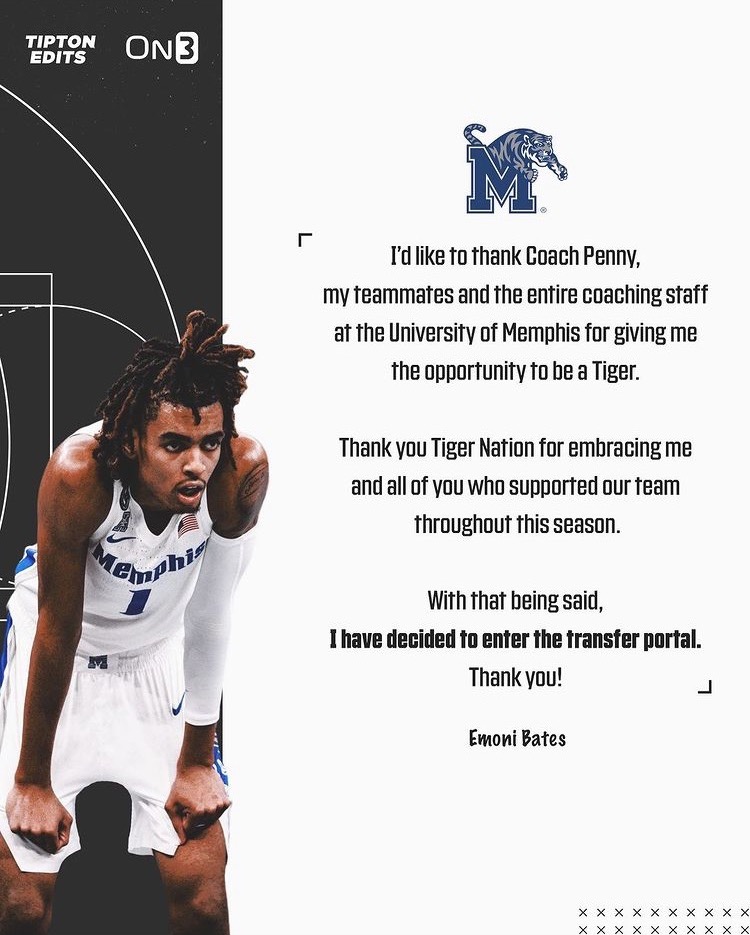 By ADAM ZAGORIA The Emoni Bates era at the University of Memphis is over after one season. The heralded 6-foot-9 freshman forward who two years ago appeared on the cover of Sports Illustrated with the headline “Born for this: Magic, Michael, LeBron…And the 15-Year-Old Who’s Next in Line” announced Saturday via Instagram that he will transfer. “I’d like to thank Coach Penny, my teammates and the entire coaching staff at the University of Memphis for giving me the opportunity to be a Tiger,” he wrote on Instagram in a post first reported by On3.com. “With that being said, I have decided to enter the Transfer Portal. Thank you!.” The 18-year-old Ypsilanti, Michigan native is not eligible for the NBA Draft until 2023 and now has to find a new home for next season. He averaged 9.7 points and 3.3 rebounds in 18 games for Memphis, but did not play from Jan. 27-March 17 due to a reported back injury. He played a total of 15 minutes in two NCAA Tournament games, including 12 when Memphis lost to Gonzaga March 19 in the second round. Bates initially committed to Michigan State before decommitting in April 2021. He then reclassified ahead a year in order to enroll at Memphis under coach Penny Hardaway, the former NBA star.. Hardaway also coached 7-foot-1 James Wiseman on an age group team before Wiseman followed Hardaway to Memphis for the 2019-20 season. Wiseman was suspended for 12 games by the N.C.A.A. because his family improperly accepted moving expenses from Hardaway, and he left Memphis to train for the N.B.A. draft after only a handful of games. He was the No. 2 pick in 2020 and now plays for the Golden State Warriors. Memphis is facing at least four Level I and two Level II violations as a result of the Wiseman case. Expectations at Memphis were sky high after Hardaway in August persuaded both Bates and power forward Jalen Duren to reclassify and enroll early at the university. They were top two recruits in the Class of 2022 before reclassifying. Hardaway then hired the Hall of Fame coach Larry Brown and the former N.B.A. star Rasheed Wallace to his staff to help guide the young stars and presumably prepare them for the NBA. Duren, who drew comparisons to Dwight Howard, is eligible for the NBA Draft this summer. The Tigers entered the season at No. 12 in the A.P. preseason poll, and various sports books had them among the favorites to win the N.C.A.A. tournament. Yet after starting the season 5-0, the Tigers lost four straight games, including a 19-point rout by Iowa State and a 2-point home loss to Murray State. During the skid, Bates asked out of the starting lineup, and the locker room was seemingly split between veterans and freshmen. Hardaway didn’t hold back in ripping his older players in comments to The Athletic. “Everybody’s trying to get to the N.B.A. off the ranking we had, but nobody is willing to sacrifice minutes, touches, anything,” Hardaway said. “It’s been miserable.” Bates was competing against players often several years older because of his reclassification and because of a wave of fifth-year players and transfers immediately eligible this season. He is a natural small forward, yet Hardaway chose to play him at point guard to start the season. It hasn’t gone well. He often dribbles with his head down or dribbles into double teams and has taken a lot of questionable shots. Some close to the program said he was not very coachable, either. “There are a lot of shots that you can get away with in high school or A.A.U. basketball that you can’t get away with in college basketball, no matter who you’re playing,” Memphis broadcaster Greg Gaston Sr. said. Still, Hardaway got the team to play much better during the time when Bates was down with the back injury. They won 12 of 14 going into the NCAA Tournament, where they went 1-1. Bates will now seek to find a new home, while Hardaway will have virtually an entirely new team next season. Follow Adam Zagoria on Twitter Follow ZAGSBLOGHoops on Instagram And Like ZAGS on Facebook