Will Kansas star Ochai Agbaji overcome shooting slump to lead the Jayhawks to the Final Four? 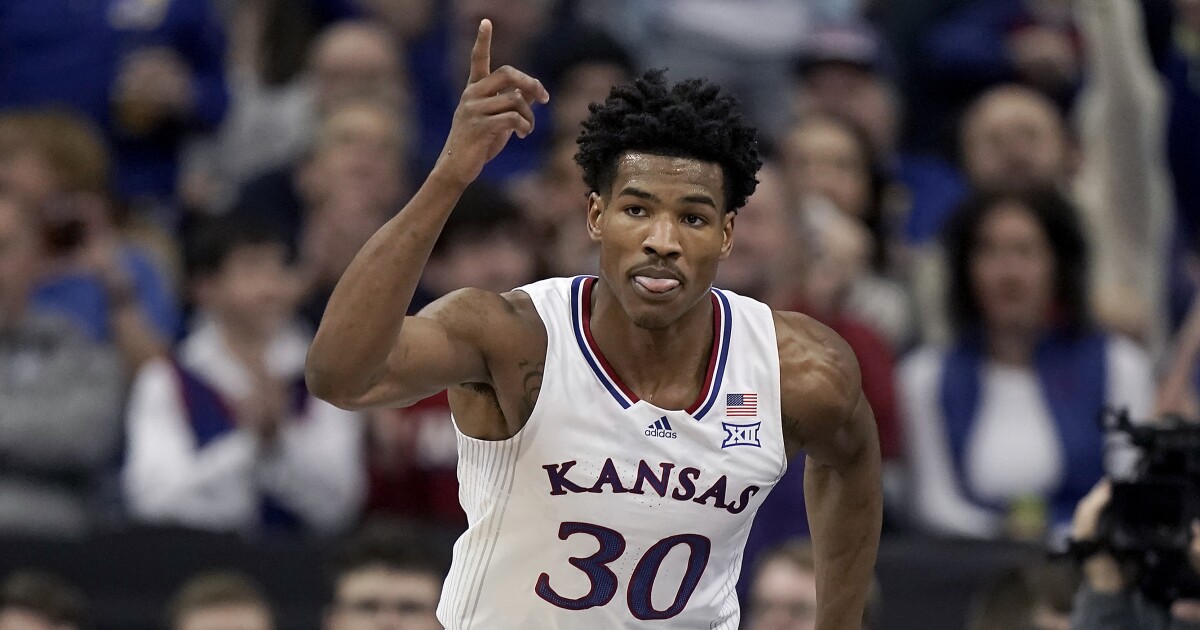 By HENRY EISENBERG CHICAGO –— In his first three NCAA Tournament games, Kansas star Ochai Agbaji has shot 5-for-14, 5-for-14 and 2-for-8. Yet despite his struggles, the No. 1 seeded Jayhawks are into the Elite 8 and will meet No. 10 Miami on Sunday here for a spot in the Final Four. The winner face either No. 5 Houston or No. 2 Villanova in the national semifinals. “We can look at it as a shooting slump,” Kansas coach Bill Self said Friday after the Jayhawks fended off Providence, the Big East regular-season champion, 66-61, to advance to their third Elite 8 in seven years. “And I guess it is. But when you only take eight shots I don’t know if I ever consider that a slump. I know one thing — the lid will come off eventually. And when it does it will be good for KU people.” Kansas fans have to hope that the 6-foot-6 Agbaji, a projected NBA lottery pick who averages 18.9 points per game, will eventually play up to his expectations and numbers. Now in his fourth year, he is the third Jayhawk in the last seven years to receive First Team All-America honors after Devonte’ Graham and Frank Mason. Both of them led their teams to the Elite Eight. With Kansas coming in at No. 3 in the preseason rankings, expectations were even higher than when Graham and Mason captained the ship. It has turned into an anomaly for star college veterans to have played with their program for the entirety of their career. But after testing the NBA waters and getting feedback from NBA personnel, he opted to return for his senior season. Boy, was that a great decision. “Really my main focus has been consistency, focusing on that more than anything,” Agbaji said earlier this year. “Not going out with a total in mind for points or anything like that. Just being assertive and consistent.” In year four, Agbaji burst onto the scene, scoring at least 25 points in his first three games, including 29 points against Michigan State in the Champions Classic. Although this seemed unsustainable, Agbaji was able to continue his reign of terror throughout much of the season, including a career high 37-point performance at Allen Fieldhouse against then-No. 13 Texas Tech on Jan. 25. Behind Agbaji’s leadership, the Jayhawks finished the regular season 25-6, and eventually won the Big 12 Tournament title. Agbaji was named All-Big 12 First-Team, Big 12 Player of the Year, Big 12 tournament MVP, a Jerry West Award Finalist and one of four finalists for the Naismith Award . Still, he is struggling as a shooter during the most important time of the season. “Right now I think he’s doing enough stuff to help us win and we’ve had other guys step up,” Self said. “So we don’t put too much emphasis on that at all.” Kansas has had a ton of dangerous teams in the past, but having a star player has elevated it to the next level. And they need Agbaji to be that star. On Sunday, Agbaji has the opportunity to step up and help lead his team somewhere Mason and Graham did not: the NCAA championship game. Follow Henry Eisenberg on Twitter Follow Adam Zagoria on Twitter Follow ZAGSBLOGHoops on Instagram And Like ZAGS on Facebook