Rick Pitino wins 800th career game, says he hopes to win his 1,000th at Iona and that Kenny Payne gets the Louisville job | Zagsblog
Follow @adamzagoria

Rick Pitino wins 800th career game, says he hopes to win his 1,000th at Iona and that Kenny Payne gets the Louisville job 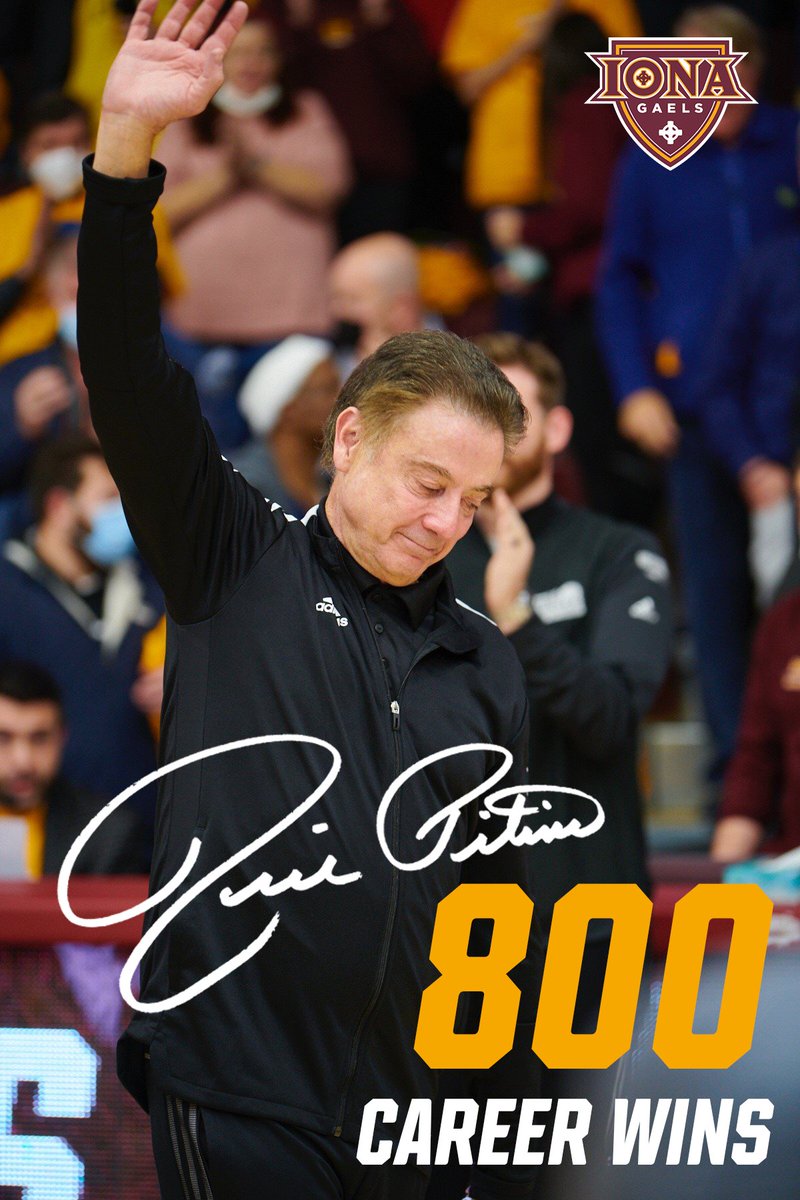 By ADAM ZAGORIA Rick Pitino won his 800th career game on Sunday in Iona’s victory over Saint Peter’s, said he hopes to win his 1,000th career game there and also “hopes’ Knicks assistant and former Louisville standout Kenny Payne gets the Louisville job. “I told the team that I’m glad I got 800 here, but I said I want to get another 200 here,” the 69-year-old Pitino said after the Gaels beat Saint Peter’s, 85-77, to improve to 18-3, 10-0 in the MAAC. “I said ‘God willing I don’t roll a seven anytime soon, maybe it’ll happen.’ But I’m real, real pleased coaching these guys that I could get 800 here.” He added: “This is a great job, we can make this into something really, really special…Great place, I’m really happy, I hope I can get 1,000 here. God willing, I hope I can live long enough to see that.” Earlier this week, Kentucky coach John Calipari congratulated Pitino on 800, and Pitino thanked him on Twitter. Pitino would have 923 victories but the NCAA vacated 123 of his wins in the wake of the scandal at Louisville that caused him to be fired in 2017 and that was connected to the FBI investigation into bribery in college basketball. Pitino was never linked directly to the Adidas payments to recruit Brian Bowen, and has long maintained he knew nothing about them. Pitino ranks 12th among Division 1 coaches in wins, but would be third behind Duke’s Mike Krzyzewski and Syracuse’s Jim Boeheim were the 123 victories intact. He’s one of only three coaches to lead five programs to the NCAA Tournament and won championships at Kentucky (1996) and Louisville (2013) before the latter was vacated. Pitino led Iona to the MAAC Tournament title a year ago and an NCAA Tournament bid. The Gaels are ranked No. 57 in the NET and are a projected 9 seed this year, per Fox Sports. He reiterated his desire to remain at Iona for the foreseeable future. “It’s a small school that you appreciate all the little things,” he said. “It doesn’t have the big things, it doesn’t have the bells and whistles that I had at Louisville and Kentucky, but none of that bothers me. I love the fact that I don’t have to go get on a plane and go play somebody. I love the bus trips. Forty-five minutes, it’s an hour, I think it’s great.” With Monmouth poised to leave the MAAC after this season for the Colonial Athletic Association, Pitino said the league has to make sure it “doesn’t disintegrate.” It would be at 10 schools without Monmouth, but Commissioner Rich Ensor has stated his desire to get to 12. Pitino recently said he would be in favor of league expansion , but only if it makes the MAAC better. He is also keeping an eye on the Atlantic 10, which will have 15 schools with the addition of Loyola-Chicago. “I like the conference. the bus trips I don’t mind,” he said. “Coaching here I think is a great honor.” He added: “It’s just easy, it’s just an easy lifestyle, to coach kids that really care. We’re not worried about let’s get an NIL for $150,000. Nobody worries about that, you just worry about let’s play ball and get better.” Pitino has often talked about trying to make Iona into the Gonzaga or Saint Mary’s of the Northeast. Part of that involves scheduling difficult non-conference opponents to boost Iona’s NCAA Tournament resume. This year alone they have wins over then-No. 10 Alabama, Harvard, Yale and Hofstra, while losing by one point at Saint Louis. If the MAAC were to remain at 10 teams and play an 18-game league schedule, it would free the Gaels up to play even more high-profile non-conference games. “We know that anybody could win the MAAC,” Pitino told me in September. “When you’ve got to play three games in a one-bid league, we’re trying to still get a bid even if we lose in the [MAAC] Tournament. That’s our goal. It’s not to try and get a high seed. It’s if we don’t win the tournament, we want to still be able to get a bid and that means you’ve got to beat some of these teams.” Asked about the Louisville situation with the school buying out Chris Mack this past week for $4.8 million, Pitino said: “I have no animosity toward Louisville because all the people that got [former AD] Tom Jurich left…so I’m hoping inside that they hire Kenny Payne. “I’m think Kenny Payne can unite Louisville again….I’m not endorsing him because that would probably be the killer for him. But I’m hoping Kenny Payne gets it because he can unite all factions of Louisville and that would be great. I don’t like to see any coach get fired, but I’m hoping for Kenny. He’s a great guy, a great recruiter, he’s a terrific coach. And if he wants it, I hope he gets it.” A week ago, Pitino appeared via video message at halftime of the Notre-Dame Louisville game to congratulate former Louisville star Russ Smith on having his jersey retired. It turned out to be Mack’s second-to-last game on the sidelines. Pressed on his thoughts on Louisville’s troubles after Sunday’s game, Pitino said: “I’m not sure that the coach didn’t want to leave. I’m not sure of that. But
there are lot of great people at Louisville, a lot of great people, and a lot of people I don’t like. Most left the Board, and I’m happy they left.” Follow Adam Zagoria on Twitter Follow ZAGSBLOGHoops on Instagram And Like ZAGS on Facebook