Rick Pitino leads Iona to signature win over No. 10 Alabama for one of biggest victories in program history | Zagsblog
Follow @adamzagoria

Rick Pitino leads Iona to signature win over No. 10 Alabama for one of biggest victories in program history 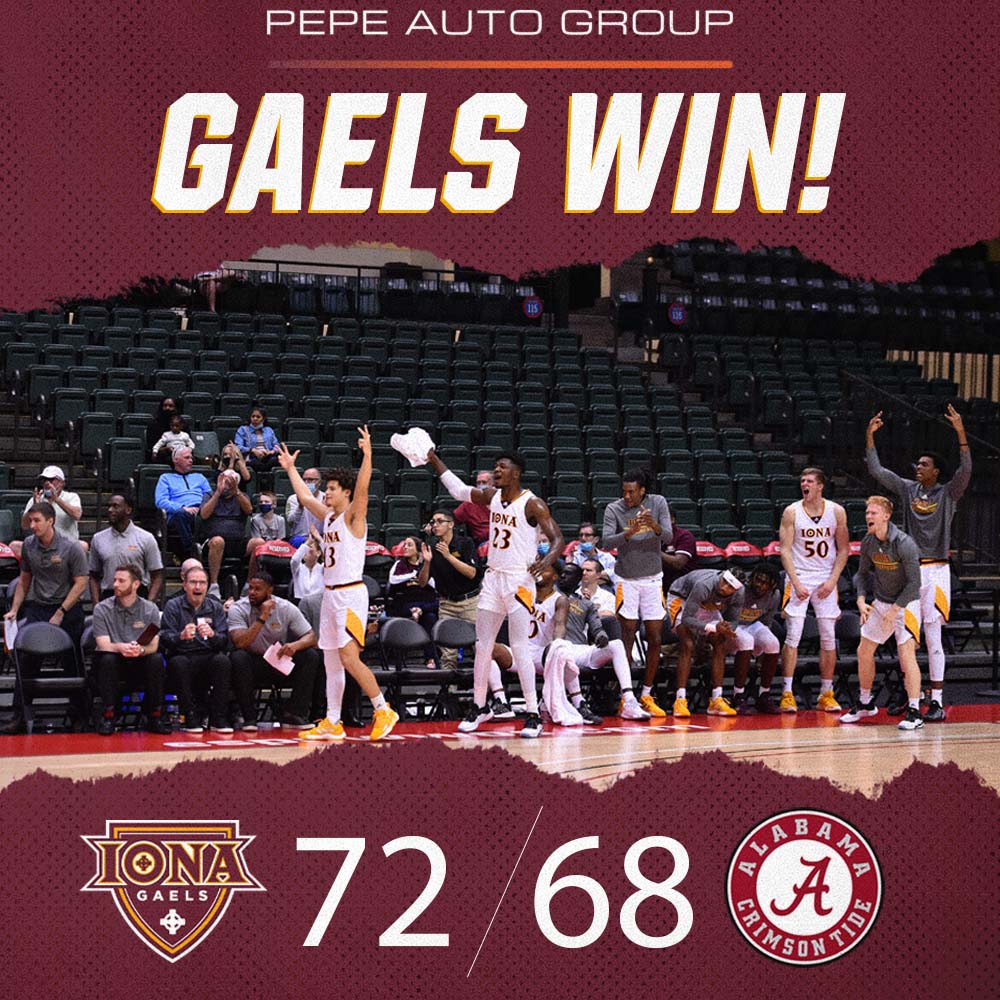 By ADAM ZAGORIA In his second year at the helm of the Iona Gaels, Rick Pitino purposely set up a challenging non-conference schedule with one goal in mind: if his team failed to repeat as MAAC Tournament champions in March, he wanted a résumé fit for the NCAA Tournament. “We know that anybody could win the MAAC,” Pitino told me in September. “When you’ve got to play three games in a one-bid league, we’re trying to still get a bid even if we lose in the [MAAC] Tournament. That’s our goal. It’s not to try and get a high seed. It’s if we don’t win the tournament, we want to still be able to get a bid and that means you’ve got to beat some of these teams. “You’ve got to beat Alabama…you’ve got to beat some of these teams.” Fast forward two months and Pitino and the Gaels just knocked off No. 10 Alabama, 72-68, in the ESPN Events International in Orlando, partially avenging the loss in the first round of last year’s NCAA Tournament. The unbeaten Gaels (6-0) will face Belmont winner in the semifinals on Friday (6:30, ESPNU). If they win that they could potentially face No. 4 Kansas in Sunday’s title game. Iona had five players score in double-digits, led by freshman Walter Clayton Jr. with 15 points and sophomore Nelly Junior Joseph with 15 points and 11 boards. Graduate student Elijah Joiner (12 points, 6 rebounds) drained a huge 3-pointer to put Iona ahead 69-65 with 1:16 remaining. “You have to win these games,” Pitino, 69, said via Zoom after the game. “It’s one thing to schedule these teams, but secondly you have to beat these teams….This was a great win but we know we’re going to have a really difficult game [Friday]. And we were prepared for Alabama, we spent a lot of time on Alabama. We’re not going to spend a whole lot of time on the winner of Drake/Belmont. We’re going to have less than 24 hours.” Referring to that NCAA Tournament loss to Alabama, Pitino said his team “didn’t have enough weapons to overcome Isaiah Ross being shut down and denied.” “This year we have more weapons and we were able to play against Alabama toe-to-toe,” he added. The greatest moment in the history of Iona basketball came Feb. 21, 1980 at Madison Square Garden when Jim Valvano’s team beat Louisville, 77-60. Louisville eventually won the 1980 national championship and that made Iona’s victory all the more meaningful. This latest victory might rank after that victory as the second-biggest win in program history. It was just the fifth win ever of a Top-25 opponent, and it came against the second-highest ranked opponent. “I can’t [over]-estimate what a big win this was,” Pitino said. “Jim Valvano had a signature win for Iona back in 1980 beating Louisville in a packed Garden, and they didn’t lose a game for the rest of the year, I believe. And tonight this was the same type of signature win for our program. And I hope we go on and have the success that Jimmy had that year.” Iona lost to Georgetown in the second round of the NCAA Tournament that year. Iona now has wins over No. Alabama, Harvard and Hofstra, and still has several key non-conference games ahead, including a matchup with No. 21 Seton Hall — which won at No. 4 Michigan — Dec. 18 at the Garden. The Gaels will be favored to repeat as MAAC Tournament champions come March, but if they don’t win it, they now have a signature win which could help them become the first program since Iona in 2012 to earn an at-large bid from the MAAC. “It’s a big win,” Pitino said. “We’ll certainly celebrate tonight but we won’t fall in love with tonight.” Follow Adam Zagoria on Twitter Follow ZAGSBLOGHoops on Instagram And Like ZAGS on Facebook

Duke’s Paolo Banchero Makes Statement In Win Over Chet Holmgren, No. 1 Gonzaga: ‘He Will Be the No. 1 Pick