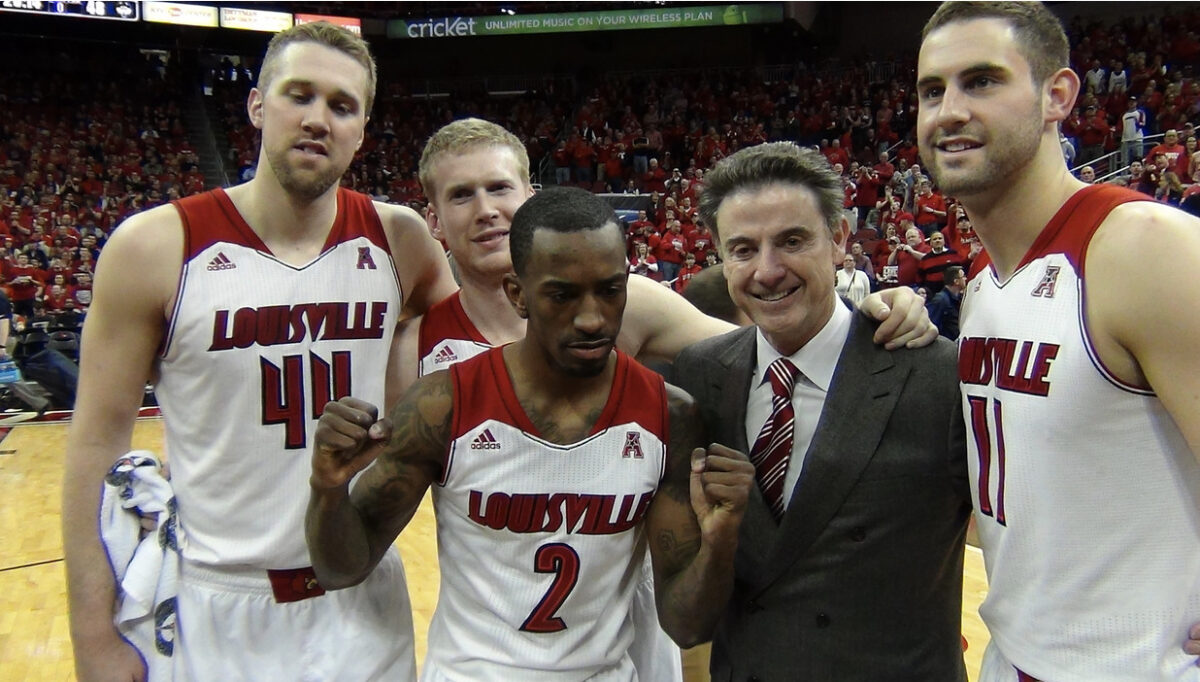 By ADAM ZAGORIA Rick Pitino was in New York on Saturday, but he made a surprise appearance in Louisville just the same. The 69-year-old Naismith Hall of Famer appeared via video at halftime of the Notre Dame-Louisville game to honor his former point guard Russ Smith — aka “Russdiculous” — as the school retired Smith’s No. 2 jersey. “I don’t I’ve ever laughed as much in coaching a player,” Pitino said as he received a loud ovation. “I don’t think I’ve ever cried as much in coaching a player. And certainly I don’t think I could love a player any more than I love you. Congratulations, son.” Pitino was fired by Louisville in 2017 after the FBI investigation into bribery in college basketball, but there was never any evidence presented that Pitino knew about the Adidas payments to recruit Brian Bowen. Pitino initially said he would never return to the state of Kentucky, but later softened his stance. One of only three coaches to lead five Division 1 programs to the NCAA Tournament, Pitino is in his second year coaching at Iona, which is 15-3, 7-0 in the MAAC with wins over Alabama, Harvard, Yale and Hofstra. Smith’s No. 2 became be the fifth number retired in Louisville history, joining No. 8 Charlie Tyra (1953-57 at UofL), No. 31 Wes Unseld (1965-68), No. 35 Darrell Griffith (1979-80) and No. 42 Pervis Ellison (1985-89).  . The 6-foot Brooklyn native is the only Louisville player in history with at least 1,800 career points, 350 assists and 250 steals. He is the Cardinals’ all-time leader in steals with 257, is fifth in career scoring at Louisville with 1,908 points, second in career free throws made with 488, and is tied for ninth in career three-pointers with 180.  A consensus All-America selection as a senior in 2013-14 and the 2014 AAC Tournament Most Outstanding Player, Smith averaged 18.2 points, 4.6 assists and 2.0 steals as the Cardinals posted a 31-6 record.  Smith was a part of the second-most successful four-year period in the Cardinals’ storied basketball history, helping Louisville win 121 games from 2010-14 (121-31, .796). He helped the Cardinals reach two NCAA Final Fours, two Big East Tournament Championships and one with the American Athletic Conference, two regular season co-conference titles (one Big East, one American), three straight NCAA Sweet 16 appearances and the 2013 national title (later vacated). Following his collegiate career, Smith was selected by the Philadelphia 76ers in the second round of the 2014 NBA Draft with the 47th overall pick, and was subsequently traded to the New Orleans Pelicans.  He played in the NBA with New Orleans and the Memphis Grizzlies, and has played professional basketball in Turkey and China, as well as with G League teams Iowa Energy, Delaware 87ers and Fort Wayne Mad Ants, where he is currently playing. He was the 2017 NBL China Player of the Year when he averaged 60.5 points per game and led the league in scoring that season and in 2019.  Smith scored a career-high 81 points for Luoyang Zhonghe of China on July 5, 2017, adding eight rebounds and seven assists in the game. Follow Adam Zagoria on Twitter Follow ZAGSBLOGHoops on Instagram And Like ZAGS on Facebook