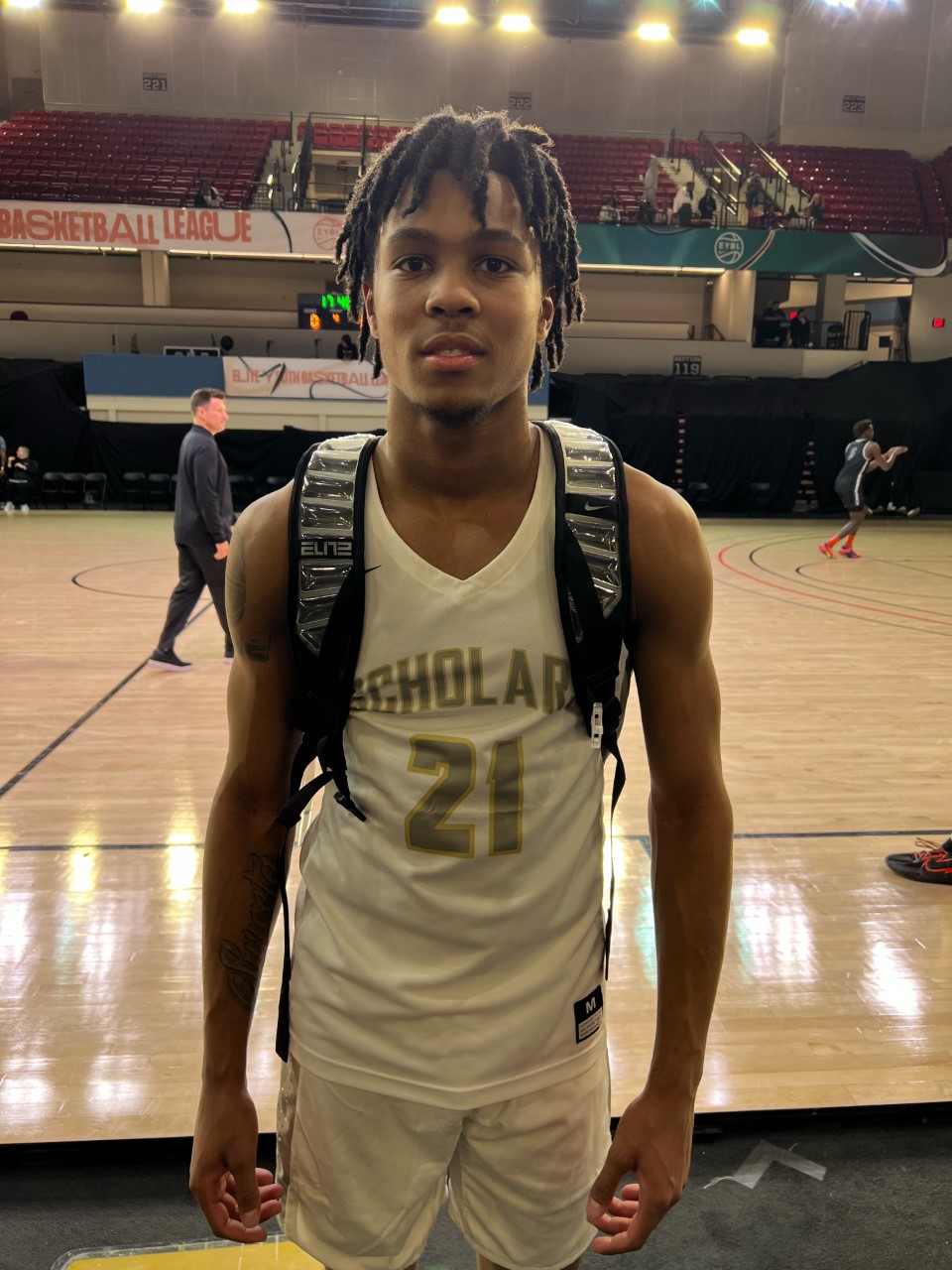 By ZACH SMART & BILAL BENJAMIN ORLANDO, Fla. — With Kentucky head coach John Calipari, Louisville assistant Nolan Smith and Syracuse assistant Gerry McNamara seated courtside on Saturday, NJ Scholars Class of 2023 guard D.J. Wagner scored 18 points, doled out 4 assists, and added 4 rebounds to propel his team to a 67-55 victory over BABC in the Nike EYBL Session 1 at Disney’s Wide World of Sports. Throughout the first half, Wagner’s high level distributing and ability to quarterback a team was evident. He routinely fed the post, fired in three-quarter court assists, and lobbed up passes for highly coveted teammate Aaron Bradshaw as he soared above the rim.  After getting everyone involved during a first half in which the Scholars built a 20-point lead, Wagner called his own number. With a corner jumper, a crafty knifing layup through traffic, and a dazzling layup through traffic that extended the Scholars’ lead to 53-39 before the third quarter buzzer, the poised guard’s advanced offensive skill set was evident. Wagner speaks to his father, former Camden High and Memphis star and one-time NBA player DaJuan Wagner, before nearly every game. Dajuan played for Calipari at Memphis in his one-and-done season before becoming the No. 6 overall pick in the 2002 NBA Draft. D.J. is cognizant of the torch he’s carrying proudly as a legacy. He knows all about his father’s torrid scoring pace, about the 100-point single game performance in a trouncing of Gloucester Township Technical School 21 years ago. He also knows that his grandfather, Milt Wagner, won an NCAA championship at Louisville in 1986 alongside current Louisville coach Kenny Payne. At the same time, D.J. is focused on creating his own path and sustaining the winning culture at Camden High School under former NBA guard Rick Brunson. While the comparisons to his father and grandfather will always be there, D.J. said he’s got his own unique stamp to leave on his anticipated incoming senior year at Camden.  “I would say I want to leave my mark as a winner, as another state champion,” said Wagner, who helped lead Camden to the New Jersey Group 2 state championship last month but lost to Class of 2023 North Carolina commit Simeon Wilcher and Roselle Catholic in the final Tournament of Champions in New Jersey history in a game that Calipari attended. “We want to win a championship and win it for the city, you know?” he asked. “We we want to go out as a great group, to be remembered as winners.”  Wagner was quick to cite Kentucky as the school he’s been in contact with the most. He’s got tremendous family ties with Calipari, who coached Dajuan Wagner to a 21-15 season during Wagner’s lone year at Memphis back during the 2001-2002 campaign. D.J. said last week at a USA Basketball Camp in New Orleans that Louisville had not yet officially begun recruiting him, but the widespread speculation is that Milt Wagner will join Payne’s staff at Louisville, putting the Cardinals in a strong position for the No. 1 prospect in 2023. Meantime, schools like Syracuse and Auburn are also recruiting Wagner. Although there’s no rush for Wagner on making a decision for college he has been on some official and unofficial visits to Kentucky, Memphis, Temple and Villanova. “I had a great time at all of them,” he said. As Wagner goes through this spring and summer season he has one main goal. “I’m locked in on winning Peach Jam,” he said. “The focus is just on hooping at the moment.” When it comes to making a decision for college he isn’t rushing anything. “I don’t have a timeline or anything like that,” he said. “I don’t have any main schools either.” Follow Bilal Benjamin on Twitter Follow Zach Smart on Twitter Follow Adam Zagoria on Twitter Follow ZAGSBLOGHoops on Instagram And Like ZAGS on Facebook