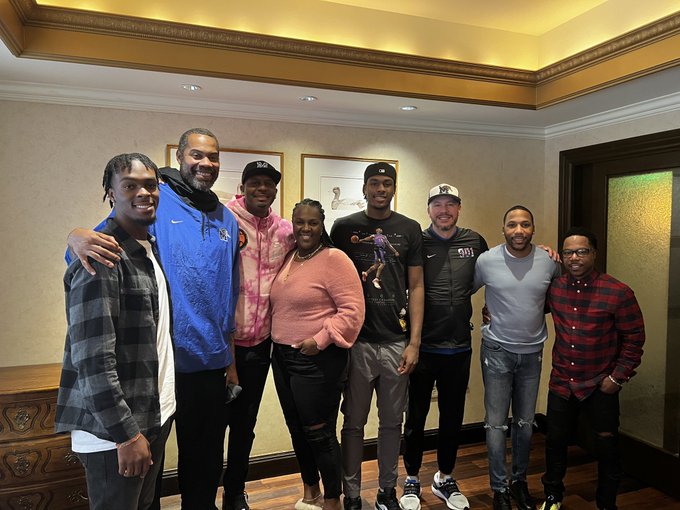 By ADAM ZAGORIA Mackenzie Mgbako, the 6-foot-8 Class of 2023 forward from Gill St. Bernard’s (NJ) and the NJ Scholars Nike EYBL program, took his official visit to Memphis this weekend. Mgbako, ranked the No. 3 prospect in his class by 247Sports.com, posed for pictures with his cousins and the Memphis staff, Penny Hardaway, Rasheed Wallace, Larry Brown and Cody Toppert. He also took pictures with Memphis freshmen Emoni Bates and Jalen Duren, who played on the EYBL circuit with Bates Fundamental and Team Final. Mgbako has also visited Duke and Kentucky, the latter with his AAU teammate D.J. Wagner, the No. 1 prospect in 2023. He is also considering visits to Michigan and Rutgers, his high school coach said. “He shoots the ball extremely well, handles the basketball at 6-8 with ease and has a great feel for the game,” Gill coach Mergin Sina said. “Once he gets a little stronger, look out! He reminds me of a younger Kevin Durant. Upside through the roof!” Follow Adam Zagoria on Twitter Follow ZAGSBLOGHoops on Instagram And Like ZAGS on Facebook