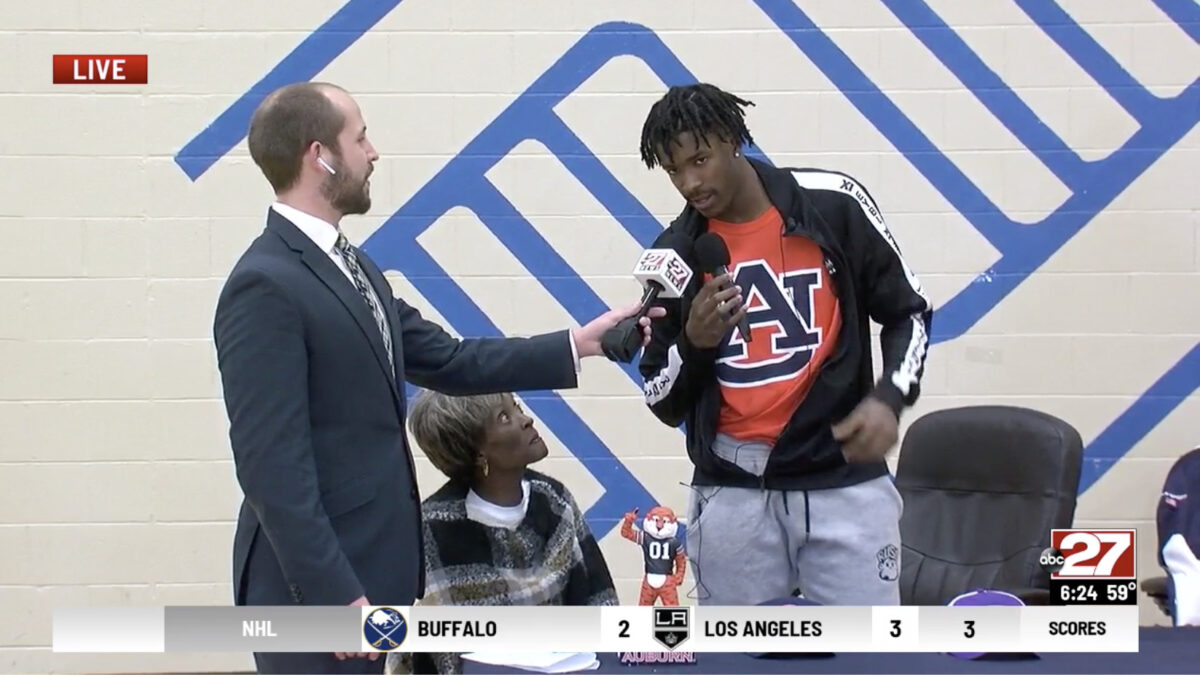 By ADAM ZAGORIA Chance Westry is headed to Auburn. Ranked the No. 9 small forward in the Class of 2022 per the 247Sports.com Composite, the 6-foot-5 Westry announced Sunday on ABC 27 in Pennsylvania he had chosen the Tigers over Syracuse, Nebraska, DePaul, LSU, UConn, Arizona State, Washington, USC and Maryland. “My final choice was Auburn so I can’t wait,” he said. “It’s just a school full of guards. Coach Bruce Pearl is a great coach, great bond with him and his coaching staff, even little Steve [Pearl] and coach Ira [Bowman]. Great coaching staff, great system, I love the way they play and I just felt at home. I can’t wait to get down there next year and get to work.” Westry recently moved from Hillcrest Prep (AZ) to Arizona Compass Prep after previously attending Sierra Canyon (CA) for a brief spell last season and Trinity (PA) for his first two seasons. At Trinity, he scored more than 1,000 points, including a 40-point, nine-rebound, seven-steal, four-assist effort in a state title loss to Lincoln Park as a freshman. Arizona Compass Prep is the preseason No. 1 team in the nation, according to various polls. He plans to fly out to his first practice there on Monday. “It’s just full of hard work at the school,” he said. “We push each other every day and we’re all as one. It’s a brotherhood.” Westry joins point guard Tre Donaldson in Auburn’s 2022 class. Westry helped the NY Rens reached the semifinals of Peach Jam in July. “Chance has a tremendous feel for the game,” NY Rens director Andy Borman said. “He’s an advanced decision-maker on the ball and has excellent vision. He has a unique ability to score the ball, but also keep his teammates involved and happy. “He is a very positive influence on his teammates. He has a bright perspective at all times during the game. I think he will be an immediate impact freshman in college. I personally love him on the ball, but he is fully capable of playing off the ball as well.” Both the Australian NBL and the Overtime Elite league have made pro offers to Westry, bu he opted for college instead. The NBL reportedly offered nearly $1 million plus incentives, while sources said the Overtime offer was in the high-six figures. Overtime has signed more than 20 players, most recently including Westry’s NY Rens teammate Dominick Barlow, a New Jersey native. Yet another one of Westry’s Rens teammates, Class of 2023 Roselle Catholic guard Simeon Wilcher, also turned down a high-six figure offer from Overtime to remain in high school. The five-star guard has a slew of high-major offers and wanted to enjoy his high school prom and potentially play in the McDonald’s All-American Game in 2023. Follow Adam Zagoria on Twitter Follow ZAGSBLOGHoops on Instagram And Like ZAGS on Facebook