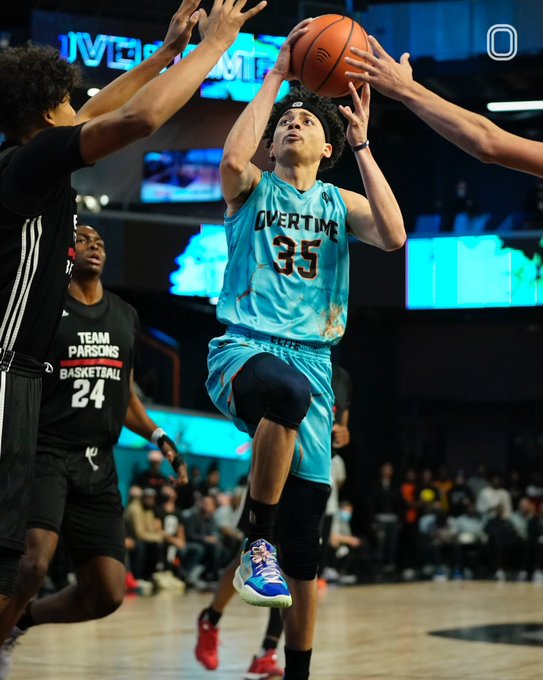 By JACOB POLACHECK ATLANTA — The new Overtime Elite league tipped off for opening night on Friday with a trio of games against some of the top high school programs in the nation. With an electric atmosphere in the brand-new Overtime Elite Arena, the night was highlighted by new rules and a buzzer-beater victory. Some of the league’s new wrinkles include a new free throw rule in which, on foul, players shoot one throw worth the amount of points the attempted free throw was worth. For example, if a player is fouled on a two-point field goal attempt, he will shoot one free throw worth two points. If a player is fouled on a three-point field goal attempt, he will shoot one free throw worth three points. And-one conversions are handled in the traditional way.  Many of these changes are intended to speed up the pace of play, including the advent of 20-second timeouts.  “We don’t want fans sitting in the stands too long where there’s two free throws, a minute timeout,” Overtime Elite head coach Kevin Ollie said. “We want to keep the pace going and I thought we did that tonight. I think we gave them a show.”  Split up into three Overtime Elite teams, the night kicked off with a matchup between the Overtime Elite Team Gomes and the Dr. Phillip’s (FL) Basketball Club. Overtime Elite’s backcourt duo of Lewis Duarte and Jean Montero led the way as OTE came away with an 86-71 victory. Duarte was the leading scorer on the night with 29 points on 9-for-14 shooting, including 4-for-7 from three point range. Meanwhile, Montero finished with 19 points and nine rebounds in the victory. Another standout from OTE’s first game was Dominick Barlow, a 6-foot-9 forward out of Dumont, NJ. Barlow finished with 14 points and six rebounds and played a major role in slowing four-star Kansas commit Ernest Udeh Jr., who finished with only 13 points. “It was a little sloppy in the beginning, but we eventually found our groove,” Barlow said. “It was our first time ever playing together, so there were obviously things we have to correct. Energy was high and it was exciting to kick the season off.” In the second game of the night, Ollie coached his team, featuring Bryce Griggs, Bryson Warren, Jalen Lewis and Jaylen Martin to a thrilling overtime win over Mikey Williams and Vertical Academy.  OTE got off to a big lead in that matchup, extending its lead to 19 at the close of the third quarter. However, in the fourth quarter, Vertical Academy stormed back.  Williams, who finished with 16 points on 4-for-21 shooting, 13 rebounds and five assists, helped spark his team’s comeback. Yet, with under a minute remaining and a Vertical Academy 82-78 lead, Overtime Elite guard and Williams’ former teammate, Griggs, put the game in his own hands.  Griggs sank a huge three-pointer with just under 25 seconds remaining to cut the Vertical Academy lead to one. After a Williams two-point free throw extended the lead to three, Griggs hit an unbelievable 30-foot three-pointer just before time expired to send the game to overtime.  With Overtime’s new overtime rules and the game squared at 84, the first team to 88 wins the game. After taking a 86-84 lead, Overtime was one basket away from claiming the win.  On the next play, Griggs drove to the basket before kicking out to an open Warren in the corner. Warren, who was previously 0-for-6 from three-point range, knocked down his first shot from deep to give OTE the rare walk-off win. “It was crazy,” Warren said. “I saw my guy Bryce driving and I just wanted to roll with him. He had the outlet, threw it to me and I knocked it down.” Warren finished the game with 18 points on 7-for-19 shooting. One of the biggest standout performers in Game 2 was OTE forward Jalen Lewis, one of the youngest players with the program. Led by an electric third quarter showing, Lewis had a 20-point, five-rebound performance. “I was just thinking I’m trying to pop out here because I was feeling my shot,” Lewis said. “I was trying to get my shot to fall because usually when I start hitting I’m hitting, so I’ll shoot a lot. You saw it at in the first half, I was trying to get something to fall.” Game 3 saw Overtime Elite easily defeat Calvary Christian 83-71, largely led by a solid performance from 6-foot-8 forward Matt Bewley, showing off with some highlight-reel dunks and alley oops. Overtime Elite on Twitter: “Matt Bewley letting em HEAR IT 😤 https://t.co/pryYBdf0O6” / Twitter “I thought the experience was great,” Bewley said. “Coming out here with me and my guys, there was good energy out here. It was our first time on the pro court, so I thought it was good. I feel like we did what we needed to do, played hard and we got the win.” Follow Jacob Polacheck on Twitter Follow Adam Zagoria on Twitter Follow ZAGSBLOGHoops on Instagram And Like ZAGS on Facebook