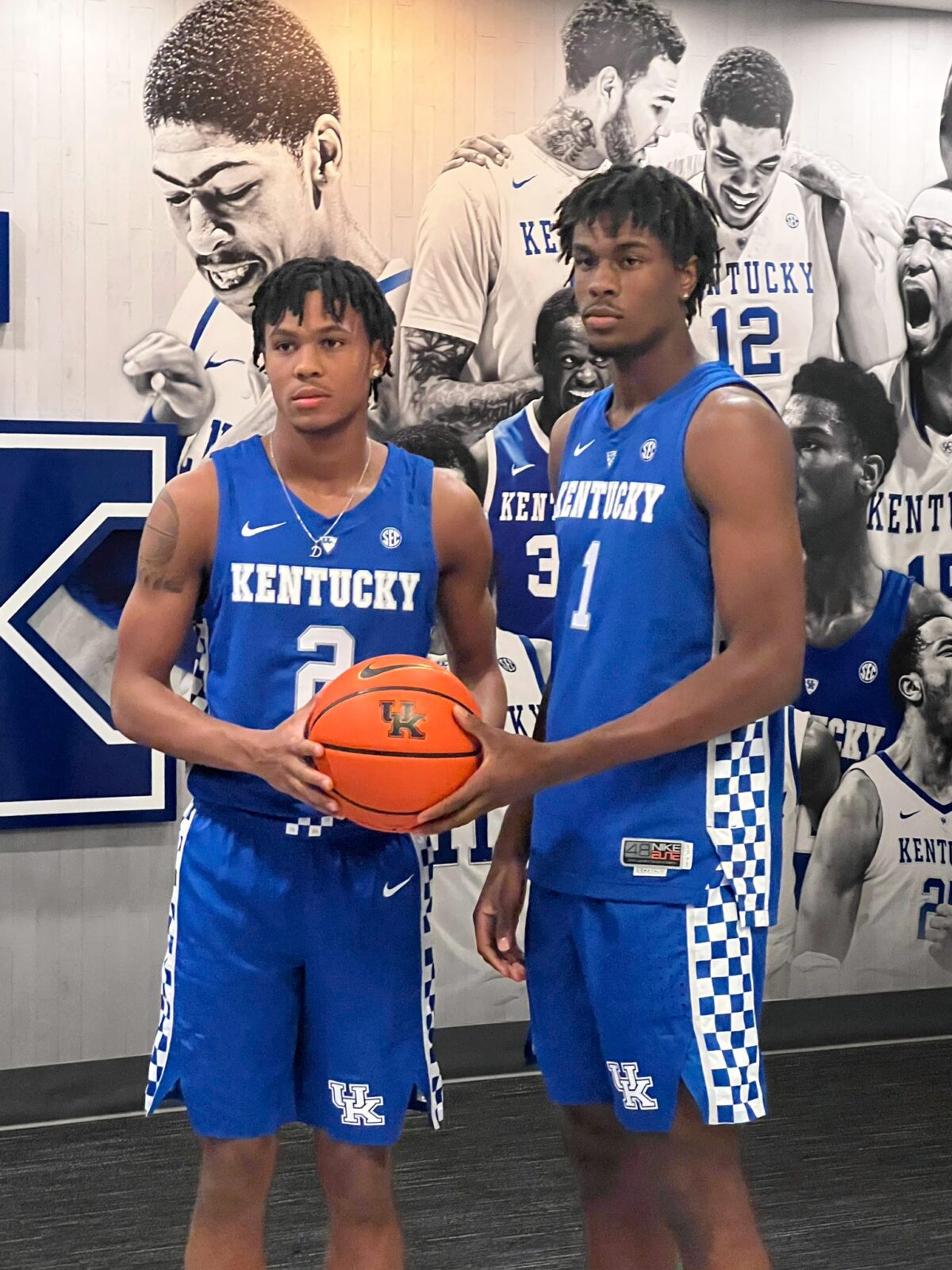 By ADAM ZAGORIA John Calipari has enjoyed a New Jersey pipeline for years. From Dajuan Wagner to Michael Kidd-Gilchrist to Karl-Anthony Towns to Isaiah Briscoe to Lance Ware, Calipari has successfuly recruited some of New Jersey’s finest talent. Now Calipari and his staff hope to keep that trend going with two Class of 2023 studs in D.J. Wagner of Camden High School, Dajuan’s son and the No. 1 prospect in the class, and Mackenzie Mgbako of Gill St. Bernard’s, the No. 3-ranked player in the class. Wagner and Mgbako are teammates on the NJ Scholars Nike EYBL team. As he always does at ‘Big Blue Madness,’ Calipari used his bully pulpit to talk about Kentucky’s accomplishments and to use the event as a PR event for fans, players and recruits. “The vision of this program has not changed, putting players first, helping them reach their dreams remains the mission,” he told the crowd. “When they succeed, we all succeed. “We cannot do this without understanding the foundation upon which this program was built: eight national titles, 17 Final Fours, 55 All-Americans, the winningest program in the history of college basketball.” Calipari then went on to list a slew of NBA players who have come through the program, including John Wall, DeMarcus Cousins, Brandon Knight, Anthony Davis, Kidd-Gilchrist, Nerlens Noel, Julius Randle, Devin Booker, Jamal Murray, Bam Adebayo, Tyler Herro and Tyler Ulis, Shai Gilgeous-Alexander, PJ Washington, Tyrese Maxey and Immanuel Quickley. According to one mock draft, the 6-3 Wagner is the projected No. 1 pick in 2024, while the 6-7 Mgbako is No. 7. Before tripping to Kentucky, Wagner was at Memphis for their Midnight Madness along with fellow New Jersey native Zion Cruz. Even though many in recruiting circles think Wagner will eventually land at Kentucky, sources said the family is wide open and wants D.J. to be recruited by Memphis and other schools. Villanova, Temple and Auburn are also in the mix. “I get the feeling he’ll go to college,” one source said of Wagner. “I do get that feeling.” Mgbako, meantime, holds offers from Kentucky, Duke, UNC, LSU, Ohio State, Georgetown, Maryland and others. He recently visited Ohio State and Duke, and the entire Duke staff has been into Gill St. Bernard’s to see him. “Coach [Orlando] Antigua and I have a really good relationship and we’ve been talking for almost a year now,” he told 247sports.com. “His message has just been that Kentucky is a really good place to be and a place for me and that I will be very successful if I go there.” Photo: @UKCoachCalipari Follow Adam Zagoria on Twitter Follow ZAGSBLOGHoops on Instagram And Like ZAGS on Facebook