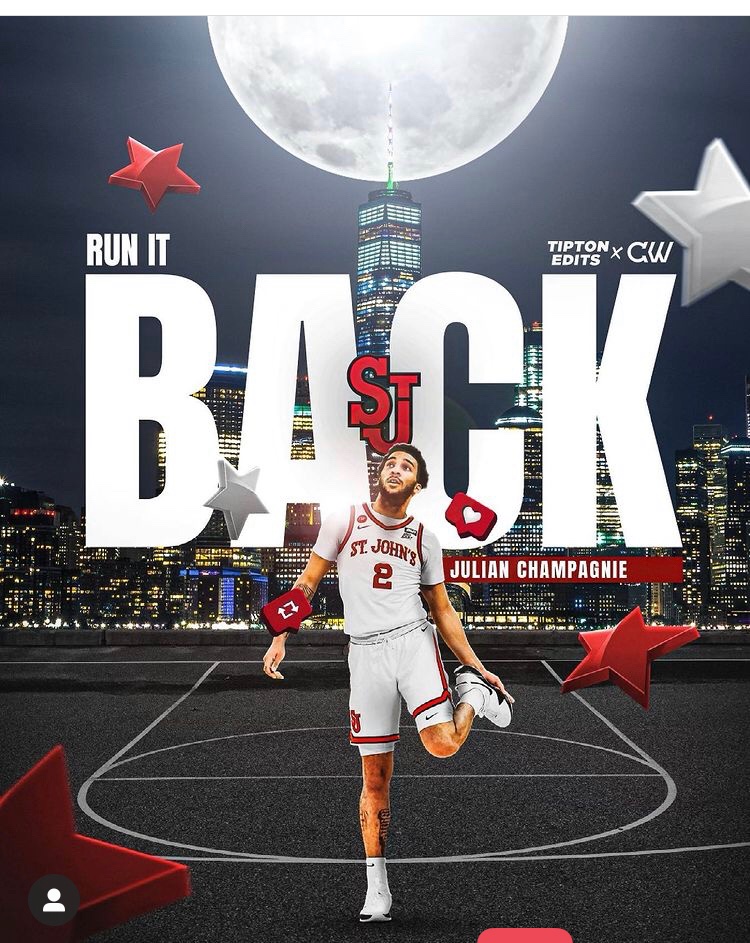 By ADAM ZAGORIA St. John’s sophomore wing Julian Champagnie will withdraw from the NBA Draft and return to Queens for his junior season, bolstering the Red Storm’s roster for the 2021-22 season. Champagnie, a 6-foot-8, 220-pound wing out of Brooklyn, NY, led the Big East in scoring during the 2020-21 season, averaging 19.8 points, 7.4 rebounds and 1.4 steals per game as a sophomore. “This was an extremely difficult decision,” Champagnie told ESPN.com. “It’s been a lingering thought for months now. I enjoyed the process, but I didn’t put myself in the spot I wanted to, partially because of a wrist injury I suffered early on that set me back mentally and physically. I didn’t shoot as well as I wanted to it. I am not sure exactly where I would have gotten drafted, what part of the second round. Being in that spot in the draft, I felt it wouldn’t hurt me to go back to school.” His twin brother, Justin, attended the NBA Draft Combine along with his brother, but will remain in the Draft. Pitt and St. John’s will face off Dec. 18 at Madison Square Garden, without Justin. Julian Champagnie shot 43.3 percent from the field and 38.0 percent from three-point range. “We’re obviously thrilled to welcome Julian back to St. John’s for his junior season,” said Head Coach Mike Anderson.  “Julian used this pre-draft process the way it was intended, getting important feedback that will make him a better player and prospect in the long run.  We look forward to helping Julian develop in any way we can.” The Johnnies lost several players to transfer but also added Tareq Coburn (Hofstra), Aaron Wheeler (Purdue), Montez Mathis (Rutgers), Joel Soriano (Fordham) and Stef Smith (Vermont). “I don’t know how next year will shape out. We’ll have a bigger team,” Champagnie told ESPN. “We have more talent and more height. I’m hoping to move from the 4 to the 3. We’ll do what we need to win games. But I made it clear that a big reason I’m coming back is not to play the 5 next year. I need to show people I worked on my game. “Guarding perimeter players and being a perimeter player. I need to play the wing, not be sitting in the paint guarding 4s and 5s. That won’t help my draft stock. We’ve been having those conversations. I think they are hearing me out. Obviously, there are some situations where we’ll need to go small at the end of games. I’ll cross that bridge when we get there. Winning is going to be a big key. I want to win more games, get to the tournament and try to win a championship.” The Big East figures to be loaded with older teams featuring players returning for both an extra year and from testing the draft waters. Villanova, Seton Hall, UConn, Creighton, Providence, Xavier and Butler are among those returning older rosters. The deadline to withdraw from the Draft is Wednesday. Follow Adam Zagoria on Twitter Follow ZAGSBLOGHoops on Instagram And Like ZAGS on Facebook