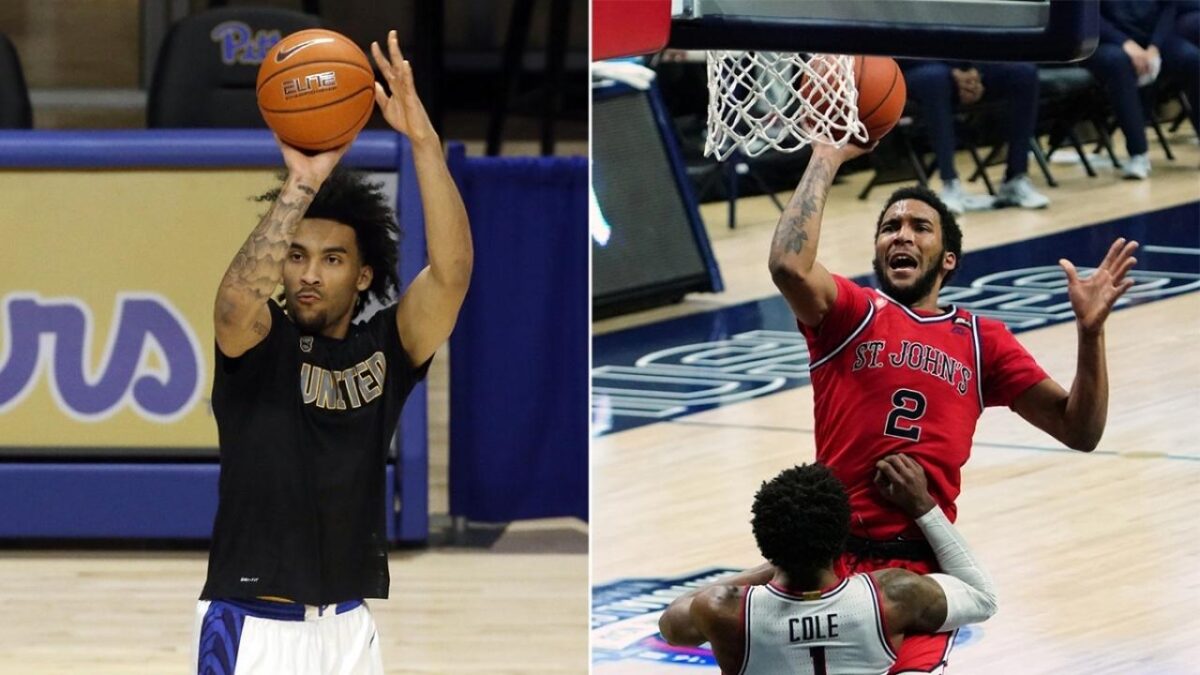 By ZACH SMART Since they were little, Brooklyn-bred twin brothers Justin and Julian Champagnie have been inseparably paired together. Justin (Pittsburgh) and Julian (St. John’s) may have taken a multiple year hiatus from their basketball brotherhood, albeit testing the NBA waters has tightened the close-as-ever brothers’ competitive relationship once again. Both brothers played together at Bishop Laughlin under head coach Ed Gonzalez. Julian was the more naturally skilled one, possessing a better shot and more of a versatile game with finesse. Justin was more workmanlike, a better rebounder and a fierce defender with a bulldozing style and mentality.  The twins played together for New Heights on the AAU circuit. They were recruited together. And, until later in the recruitment process, it seemed both brothers would wind up at the same school together. Now they are back and providing moral support for each other as they undergo the NBA Draft Combine process. “It’s really an amazing story, because they’ve been best friends their whole lives and been side by side,” said Adam Berkowitz of New Heights. The potential realized in the twins at a young age translated to college, as both authored memorable sophomore seasons. Julian, who stayed local at St. John’s, averaged 19.9 points and 7.4 rebounds en route to a First Team All Big East selection. Justin was a stabilizing force under Jeff Capel at Pitt, averaging 18.1 points and 11.1 rebounds and shooting it at a 47.7 percent clip. The 6-foot-6 Justin, who Berkowitz describes as a “pitbull,” turned in multiple games of 20+ points and 20+ rebounds this past season. Testing the waters and having not ruled out a possible return to St. John’s, Julian explained that his ultimate decision won’t depend too much on whether he’s a projected first rounder or second rounder.  “I haven’t really picked and played with numbers yet,” Justin told Zach Braziller of the New York Post. I’ll do that with my people before I go to my Indiana workout…I’ll just weigh out the odds, honestly.”  The wild transfer market witnessed seven players transfer out of St. John’s this off season. Mike Anderson and SJU’s coaching staff have done a commendable job filling the void, however, bringing in a promising group that includes veteran Rutgers transfer Montez Mathis and 6-foot-11, 250-pound Fordham transfer Joel Soriano. Champagnie, however, is the Big East’s leading scorer and a focal point on whom St. John’s would lean with this new core. Justin, on the other hand, has officially culminated his collegiate career. The All ACC Selection and honorable mention All American has signed with an NCAA-certified agent.  “Justin has been a terrific member of our program for the past two years and has earned the opportunity to be a NBA Draft selection,” Capel told ZAGSBLOG.  “He put together an outstanding season under some difficult circumstances last year, earning All-America recognition and becoming Pitt’s first First Team All-ACC selection. We are proud of the way he has developed within the Pitt program and excited to see him continue to evolve as a player. Justin’s competitiveness, toughness and desire to help his family will continue to be driving factors in helping his game reach new levels. I believe he is just scratching the surface of the player he can become and look forward to watching him carve out a lengthy pro career. Justin has our love and support and will always be a part of the Pitt family.” Follow Zach Smart on Twitter Follow Adam Zagoria on Twitter Follow ZAGSBLOGHoops on Instagram And Like ZAGS on Facebook