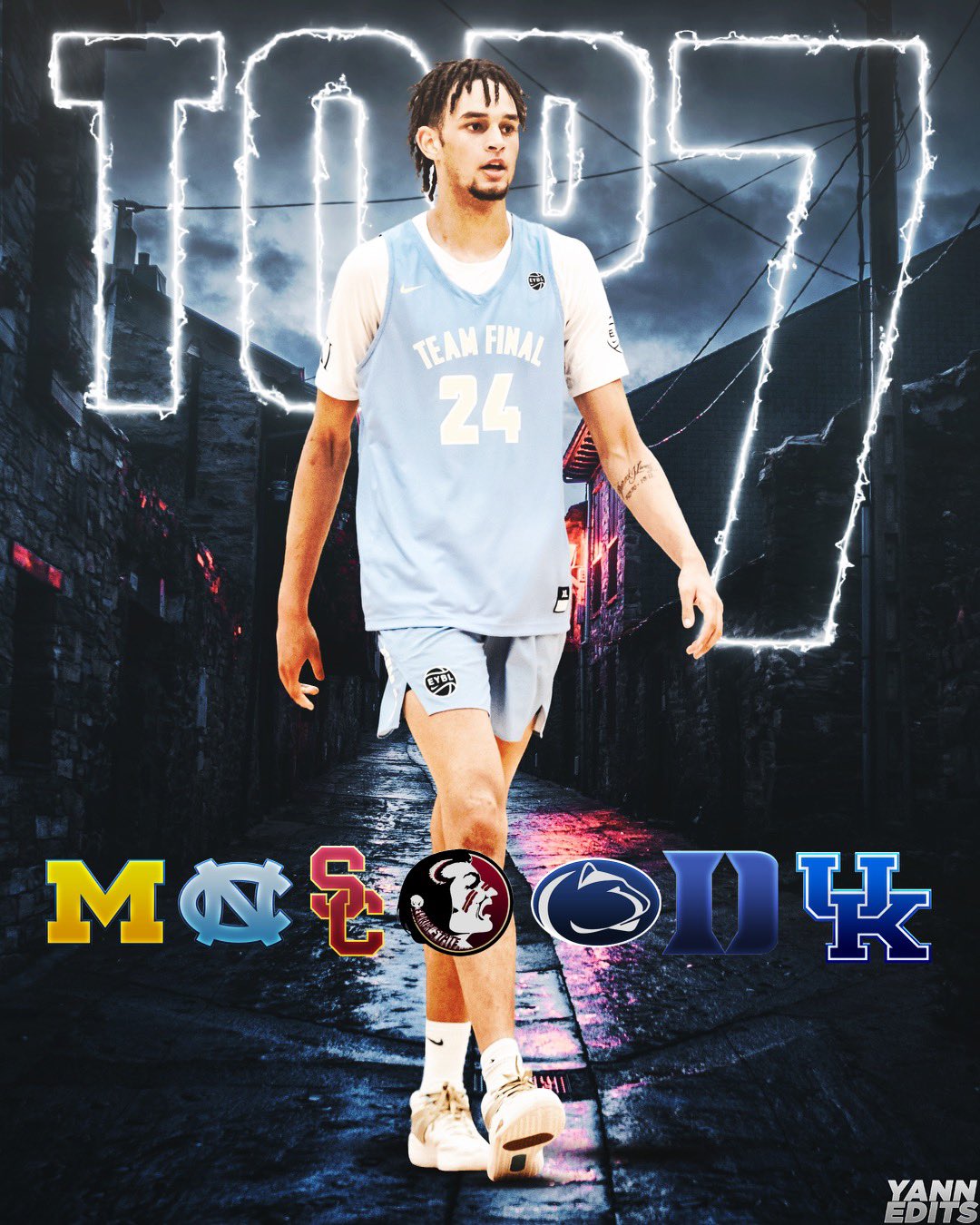 By ADAM ZAGORIA BLAIRSTOWN, N.J.– Dereck Lively sandwiched a pair of official visits to blue bloods Kentucky and Duke around playing with his Westtown (PA) teammates in the Mid-Atlantic Independent School Shoot-out at Blair Academy this weekend. The 7-foot-1 Lively and his teammates went 2-2 across a weekend in which he attracted Kentucky’s John Calipari and Orlando Antigua, Duke’s Jon Scheyer and Nolan Smith, Florida State’s Leonard Hamilton, UNC’s Brad Frederick, Michigan’s Juwan Howard and Phil Martelli and Penn State’s Micah Shrewsberry and Adam Fisher. As for the Kentucky visit last week, Lively got his offer from Calipari over dinner at a “nice restaurant.” “It was a great experience to receive that offer,” he said. “It was good to finally have that offer so I could release my top 7 and cut down my list.” Last Thursday he released a top 7 of Kentucky, Duke, North Carolina, Michigan, Penn State, Florida State and USC. He added: “Kentucky was a great visit. Their message is really, only pros come here. So if you come here, you’re going to be developed into a pro and you’re going to be living a lifestyle as a pro. Coach Calipari is really going to take me under his wing and just mold me into the player that just blossoms into the NBA.” Lively is a big fan of former Kentucky and current Lakers big man Anthony Davis. “We talked about many players, we talked about Anthony Davis, Karl-Anthony Towns, Willie Cauley-Stein,” said Lively, who bears a slight resemblance to Cauley-Stein. “I saw film of how they’re going to play me and I could definitely fit into their system.” Kentucky is also involved for Lively’s Team Final teammate Jalen Duren, who will visit campus starting Monday after tripping to Miami and Memphis. Meantime, Duke’s Scheyer and Smith were at Blair to watch Lively while also keeping tabs on Kyle Filipowski, who begins his official to the ACC school on Monday. “I’m mainly just looking to see what they have in store, what developments they’re going to help me improve and what they’re all about so it’s something I’m definitely looking forward to,” Lively said of Duke. “I wouldn’t say I’ve watched a specific Duke player, but over the years I’ve watched a variety of Duke players.” After Duke, Lively will have taken officials to North Carolina, Kentucky and Duke, but he plans to also see Michigan, Penn State, Florida State and USC in the fall. He could take some visits while college football games are going on. “I plan to visit all my schools before I commit, so I plan to take those visits during the fall and winter,” Lively said. “I want to see all my options before I decide.” With the Name, Image and Likeness developments coming to college basketball, Lively also stands to make some money, as The New York Times reported last week. But he said he won’t make a decision on a college based on financial reasons. “I’m still trying to get my head around that, it really just came out of nowhere with the NFT and paying you about that,” he said. “I’m not paying it that much attention, I really just leave up to my mom. His mom, Kathy Drysdale, is a marketing director in the Penn State athletic department “It’s not really something I’m going to be looking into that much….The money is not really something I’m going to be making my decision off of because my goal is to get to the league for a one-and-done.” As for a timeline on a college decision, he said: “Whenever it happens, it happens. I don’t want to rush it, so I’m just going to take my time with the process.” Follow Adam Zagoria on Twitter Follow ZAGSBLOGHoops on Instagram And Like ZAGS on Facebook

After attracting a Who's Who of college coaches, Kyle Filipowski set for Duke, Iowa visits