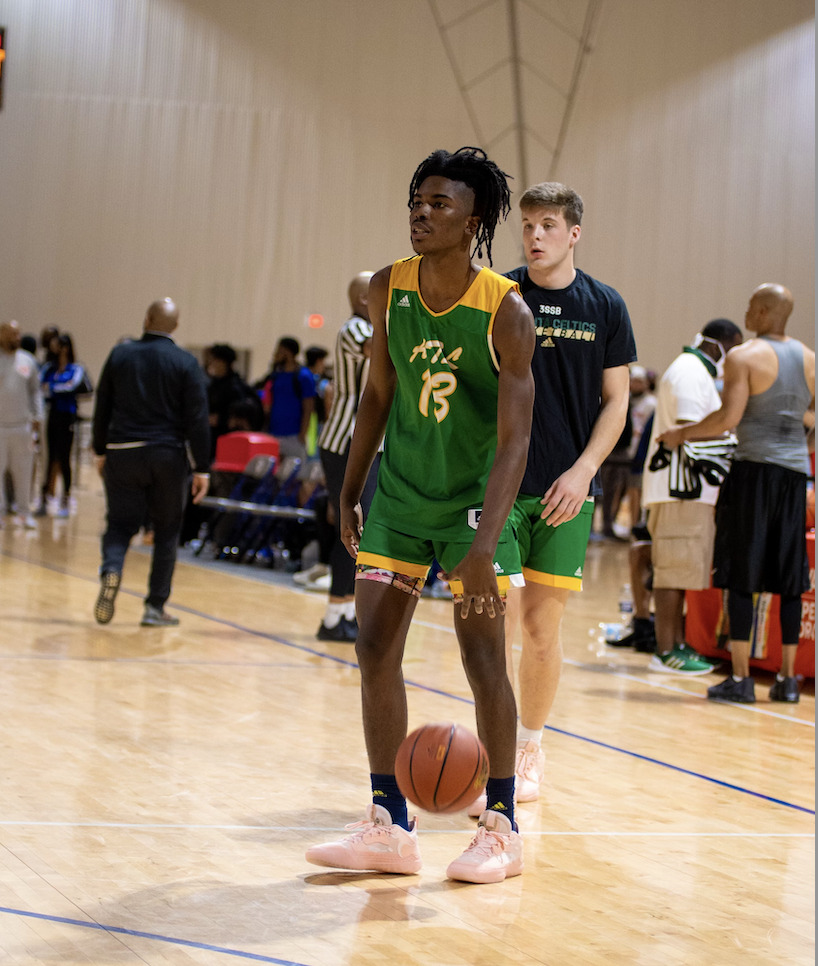 By JACOB POLACHECK After transferring from Bella Vista (AZ) Prep to Hillcrest (AZ) Prep this offseason, class of 2022 guard Jalen Carruth is ready to shine in the national spotlight. Carruth, a 6-foot-5, 170-pound shooting guard out of Suwanee, Georgia, is headed to join a roster that features four-star guard Duke Brennan, four-star center Mustapha Cisse and the Bruin’s latest addition four-star Paul McMillan IV. “They have a lot of goals, to be the best prep school out there,” Carruth said. “They’re building a program. They have many players that they’ve put in the league, pro situations and college. “They run their program very well. The winning environment and mindset was what really drew me to Hillcrest.” Carruth’s earliest basketball memories can be traced back to the third grade, training with his father, Rashad, a former guard at the University of Kentucky, and putting up huge scoring numbers in the Hapeville, Georgia youth leagues. “It’s been a lot of work since I was young,” Carruth said. “It’s put me in the position I’m in now.” Heading into July, Carruth currently holds offers from Xavier, Clemson, IUPUI, North Carolina A&T, Kennesaw State, Tulsa and Bethune-Cookman. “I’m thankful for all the programs that have reached out and all the coaches that have taken the time to text me, call me, get to know me and build a relationship,” he said. “I’ve been working out every day, getting stronger and just working. July is going to be a special month for me.” Despite having no upcoming visits planned, Carruth is already targeting a commitment for this year. “I’ll probably make my decision either late-senior year or middle-senior year,” he said. “I didn’t want to make the decision before I went out there (Hillcrest Prep). I wanted to go out there with the mindset of go hoop, go win and be the best player I could be.” When evaluating his options, Carruth is paying close attention to the environment and his relationships with coaches. “The family-oriented environment, that’s really what I look for in a school,” he said. “Just a school that really cares, that really tries to build a relationship and gets to know you as a player and as a person. I’ve had coaches really build a huge relationship with me.” On the court, Carruth prides himself on being a high-energy player and talking a lot of trash. “My attitude may come off as a bad attitude or this or that,” he said. “It’s not even that. I feel like I’m the nicest person off the court. The way I play and the way I carry myself in the game is a little misunderstanding only because of how much energy and passion I play with.” Yet, off the court, he’s a completely different person. “I’m really an open book,” he said. I’m a very nice person, a very generous person. I give back to anybody I can. I try to be the best person outside of basketball, helping little kids.” “It’s just little things, whether it’s helping an elder, giving back to the homeless or just helping anybody I can. I’m just a very generous person. I definitely think about others a lot. I try to be the best person I can be.” Photo: BTeamFilms Follow Jacob Polacheck on Twitter Follow Adam Zagoria on Twitter Follow ZAGSBLOGHoops on Instagram And Like ZAGS on Facebook