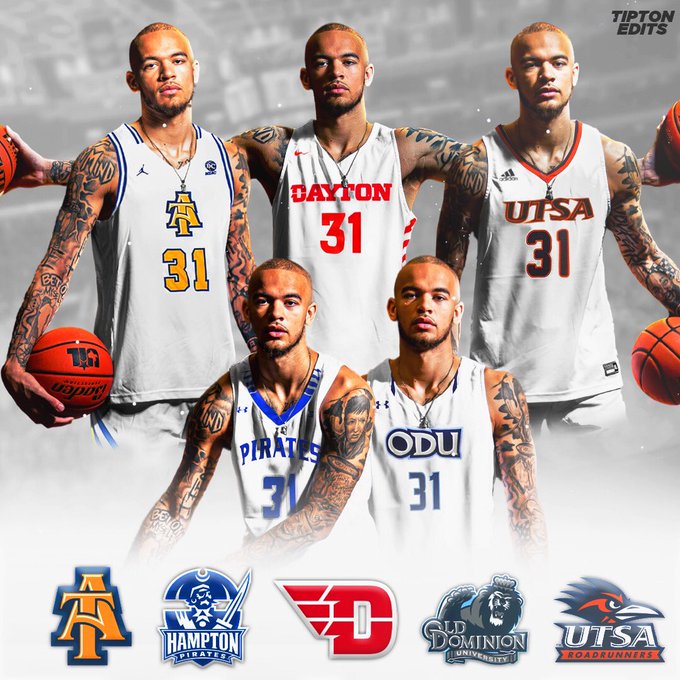 By JACOB POLACHECK Duncan Powell is down to five. The 6-foot-8, 220-pound power forward from DeSoto (TX), named North Carolina A&T, Hampton, Dayton, Old Dominion and UTSA as his Top 5 schools on Sunday, via Twitter. He broke down each school for ZAGSBLOG by phone Tuesday: North Carolina A&T: “My cousin [Adrian Powell] went there, not too long ago when they went to the NCAA Tournament in 2013. That was one of their best years. The coach knows me personally and has known me for a while. My family is from North Carolina and it’s an HBCU. Those are all plusses. That’s really where I am with them. I love their school a lot, the campus, the students, the environment. The atmosphere there is crazy. That’s really what drew me to them.” Hampton: “Coach [Edward] Joyner coached my uncle growing up. He knows my dad by name. That’s hard to find with people. That’s a really big plus. It’s a very prestigious HBCU. They have a great program in the Big South. They’ll let me rock, so that’s a big thing with me too.” UTSA: “That’s my only Texas school. Even though it’s in Texas, it’s still like six hours away. It’s like home, but it’s not home. They really want to give me the keys to the program, run everything through me and let me build the program to what they know it can be. That’s big with me. I can help change the program for the better and help a program become what they can potentially can be with a player like me.” Dayton: “They’re probably one of the most unique ones because they had Obi Toppin and they also Giannis Antetokounmpo’s brother [Kostas]. They get players to the league, lottery picks and all that. They have a Top-Three pick this year. They showed what they can do with wing players like myself. It’s a very, very, very high interest for me.” Old Dominion: “They’re in Conference USA. That’s a great conference. They’re similar to UTSA with giving me a big role as a freshman, coming in with a lot of minutes and earning a lot of responsibility offensively and defensively. That’s big too.” Powell also holds an offer to play professionally overseas. “I’m not able to say exactly, but it was an opportunity in Europe,” he said. “I’ve really kind of decided that it’s more strategic to get to the league by going to college. The door is always open, but I’m really looking for college right now.” Powell says he hopes to make a decision before the early signing period. “Sometime in November, probably,” he said. “Maybe later, but I would say sometime in November.” Ranked by 247Sports.com as the No. 35 power forward in the Class of 2021, Powell listed a number of factors for his decision. “My role as a freshman coming in. That’s really everything,” he said. “Also, the way they can push me to the league and be a No. 1 pick. That’s my goal in life so it’s everything I’m working for. “That’s all I’m really looking for, coming in as a freshman, having a big role and being pushed to be an NBA player.” On the court, Powell describes himself as a ‘very versatile player’. “I really don’t have a position,” he said. “I’m a dog and that’s what I pride myself on, being more competitive, wanting it more than anyone else and being tougher than everyone else. “That’s my whole game. Mentally, I’m going to be tougher and smarter than you on the court.” Follow Jacob Polacheck on Twitter Follow Adam Zagoria on Twitter Follow ZAGSBLOGHoops on Instagram And Like ZAGS on Facebook