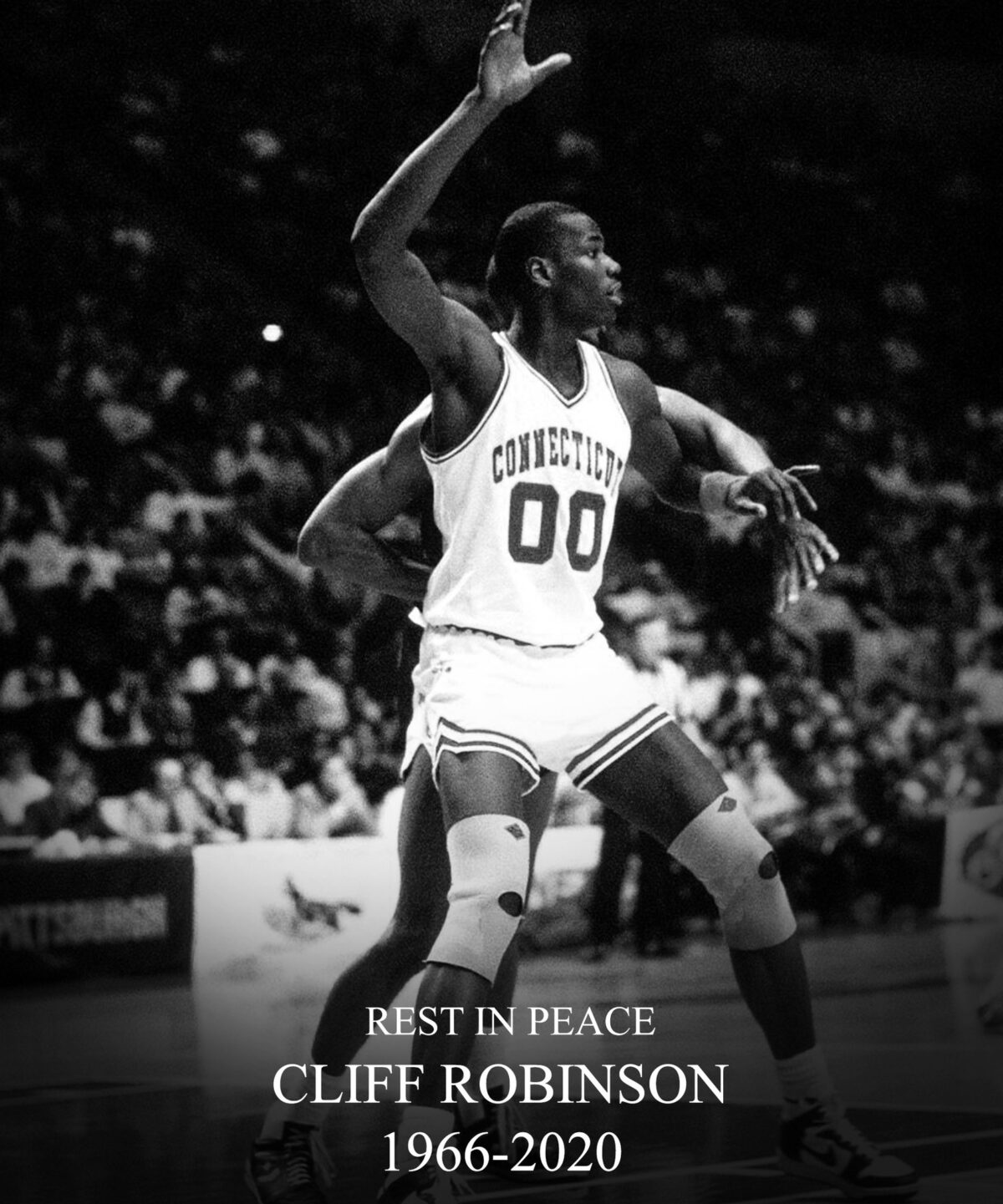 (Via UConn athletics) Former UConn basketball great and longtime NBA player Cliff Robinson passed away early Saturday morning at his home in Portland, Ore. He was 53 years old. Robinson, a 6-foot-10 power forward originally from Buffalo, N.Y., starred at UConn in the late 1980s and was an important part of the program’s rise in national prominence, highlighted by winning the 1988 National Invitation Tournament championship, the Huskies’ first-ever national title. “I’m very saddened by Cliff’s passing,” said Hall of Fame coach Jim Calhoun, who coached Robinson’s last three years at UConn, from 1986-89. “He had a lot to do with the great success we’ve had. I hope everybody realizes the contributions that he and the others from that era made to our program.” Former UConn star Stanley Robinson passed away last month at 32.

The UConn Basketball family mourns the loss of a legendary player and person, Clifford Robinson. Our thoughts and prayers are with Cliff’s family at this difficult time 🙏

Calhoun had remained in touch with Robinson through the years and Robinson returned many times to appear at the coach’s semi-annual Jim Calhoun Charity Classic All-Star Game, which reunited UConn basketball alumni every other summer. Robinson suffered a stroke some 2½ years ago, but was recovering. The cause of death was undisclosed, but Calhoun said Robinson had slipped into a coma last week. “Cliff had a very tough early life, but overcame it and became a man at UConn,” Calhoun said. “People ask me why I’ve coached for so long and the reason is stories like Cliff’s. My heart goes out to his family.” Robinson, out of Riverside High School in Buffalo, was recruited to UConn primarily by former assistant coach Howie Dickenman, under then-head coach Dom Perno. He chose the Huskies over Oklahoma, Syracuse, and Marquette, a major recruiting coup for the Huskies. A stretch forward who could power inside to the basket or shoot the outside jumper as well as guard four positions, Robinson was a versatile player who proved to be extremely durable. “I don’t remember Cliff ever missing a game or even a practice because of an injury,” Dickenman said. “He was strong and powerful, the kind of player who could take over a game.” Robinson scored 1,664 points at UConn, fourth on the all-time UConn scoring list when he left in 1989, behind only Tony Hanson (1,990), Corny Thompson (1,810) and Wes Bialosuknia (1,673). His point total still ranks No. 13 on the current all-time list. He is one of just five players in UConn history (Chris Smith, Ray Allen, Rip Hamilton, Ben Gordon) to have two 600-point seasons and he is one of just 15 UConn players to average 20.0 points for a season. He also grabbed 668 rebounds, blocked 116 shots, and handed out 136 assists. Robinson was a two-time Big East All-Conference pick and was named to the 1988 NIT All-Tournament Team. His “00” jersey number hangs on the wall of Gampel Pavilion as a member of the initial class of the Huskies of Honor. Drafted by the Portland Trail Blazers in the second round of the 1989 NBA Draft, the 36th pick overall, Robinson flourished as a versatile and durable player, enjoying an 18-year NBA career with five franchises – Portland, Phoenix, Detroit, Golden State, and New Jersey – before he retired in 2007. He was named NBA Sixth Man of the Year for 1992-93 and was selected as an NBA All-Star in 1994. He was twice (2000, 2002) named to the NBA All-Defensive Second Team. Robinson’s 19,951 points scored ranks 54th on the NBA’s all-time list and his 1,380 games played ranks 14th, not including his 141 playoff games. In addition, he had 6,306 career rebounds, 3,094 career assists, and made 1,253 three-pointers. An inductee into the Greater Buffalo Sports Hall of Fame, Robinson became an entrepreneur and businessman in his post-NBA career, and appeared on the television show “Survivor Cagayan” in 2014. Follow Adam Zagoria on Twitter Follow ZAGSBLOGHoops on Instagram And Like ZAGS on Facebook