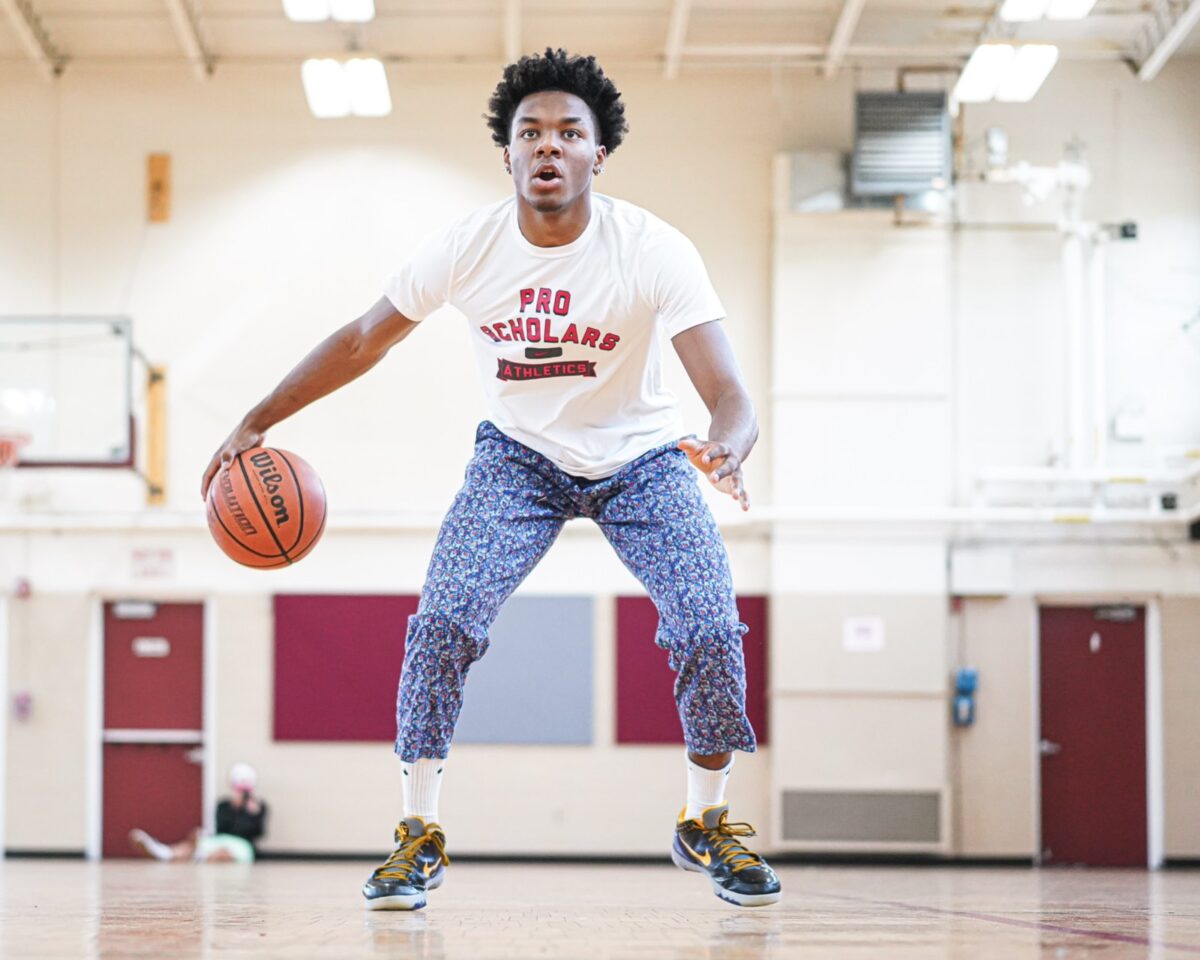 By JACOB POLACHECK Last month, Class of 2022 point guard Avery Brown said four schools were working the hardest for his recruitment, but after picking up a few new offers, Brown’s recruitment has turned in a new direction. “Things have kind of changed since then,” he said by phone Wednesday. Brown, the 6-foot-3 point guard from Northfield Mount Hermon (MA) and the PSA Cardinals, has since picked up offers from Missouri (July 12) and Indiana (July 26). “In terms of my recruitment, Missouri, Indiana and Ohio State are the three schools that I’ve been talking to on the daily,” Brown said. He broke down each school: Missouri: “I talk to coach Cuonzo Martin almost every day. Whether it’s by text or call, we talk daily. Me and him have a great relationship. We talk a lot about life and really just getting to know each other and understand each other’s values. He talks to my parents daily. He calls them every other day. We’re really just building a relationship and getting to know each other. He’s really trying to make my parents feel comfortable with them. That’s the main thing with me going to the school, my parents have to be on board too.” Indiana: “Me and coach [Archie] Miller have a great relationship too. We talk daily. He’s a great guy. We talk about their practices and he shows me where they’re at in their offense. We talk a lot. Me and him, we both have a competitive spirit and want to win championships. That’s what it’s all about, getting better and preparing for the next level. He sees me playing in the NBA and that’s where I want to be. I want to get there and I know under his leadership and coaching, there’s no reason why I wouldn’t be able to do that.” Ohio State: ” “I talk to coach [Jake] Diebler and coach [Chris] Holtmann. Coach Diebler and I talk a lot, FaceTime each other, seeing what’s going on every day. He’s always checking in. I had my Ohio State Zoom call last week. I’m pretty sure we’re going to have one soon. We have another one in the works. I’m trying to build a relationship with the Ohio State staff.” This past month, Brown has had Zoom calls with all three schools. “They’ve been great,” he said. “It’s crazy how through a Zoom call, you can really get a good idea of the school. They show the campus and the campus life as a student-athlete. It’s really great to see. They’re really putting on some great presentations for us.” Brown, a Beacon Falls, Conn., native, is ranked by 247Sports.com as the No. 18 point guard and No. 101 overall player in the Class of 2022. Due to the coronavirus pandemic, recruits are still unable to take visits to college campuses, but Brown says he hopes to take visits in the near future. “Once things open up, I want to take visits,” he said. “That’s the only thing, with the NCAA right now, I can’t really visit the schools, so the Zoom calls are the closest thing we get. I’m excited to see these campuses, see the coaches and meet them in-person.” Brown also says he wants to cut his list within the ‘next few months’. Going into my junior year, it’s a time that I want to get a list of schools cut down in the next few months,” he said. “I have to talk to my family and my coaches, coach [Terrance] ‘Munch‘ [Williams] and John Carroll with the list. I’m pretty sure it will be 12 and then it will get lower than that when time goes on. “It’s really based on if I’m able to visit these schools and if we have a basketball season.” As he prepares to enter his junior year, Brown named a number of factors when evaluating his options. “I want to play at the highest level of college basketball,” he said. “I want to play against the best. I really want to win so I want to surround myself with winners. That’s most definitely a key factor.” Brown also mentioned his relationship with the head coach as a key factor, as well as the school’s academics. “Assistants come and go, but really having a good relationship with the head coach and knowing where you stand is really what I want,” he said. “We just have to see eye to eye, really just trust him and have trust in the coaching. “I want to be at a great place academically as well. The ball won’t bounce forever. I think those are really the key factors that I have to pick a school.” Photo: Bayerowski Images Follow Jacob on Twitter Follow Adam Zagoria on Twitter Follow ZAGSBLOGHoops on Instagram And Like ZAGS on Facebook