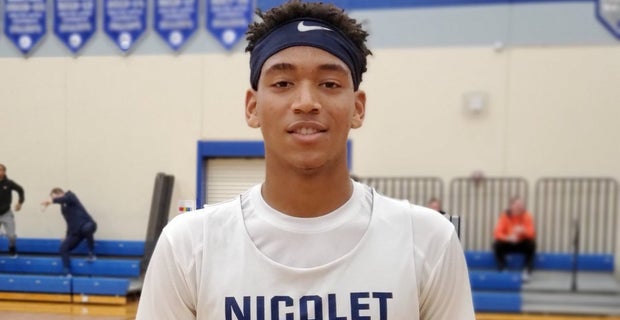 By ADAM ZAGORIA James Graham is off the board. After taking a couple of extra days to think it over, Graham has committed to Maryland, he told ZAGSBLOG ahead of his public announcement. “I’m taking my talents to Maryland,” the 6-foot-8, 210-pound forward from Nicolet (WI) High School said by phone. “[I delayed the decision] just to make sure. It’s a big decision in my life, I had to make sure I was 110 percent committed.” Graham, ranked the No. 9 small forward and No. 56 overall player in the Class of 2021 per 247Sports.com, chose the Terps over Auburn, Memphis and home-state Wisconsin. “Just the fact that they’ve been there since day one, before I was ranked or anything like that,” he said. Graham has visited the campus multiple times, recently taking an unofficial during the pandemic just to see it one more time. Maryland coach Mark Turgeon’s message to Graham? “Just to come in and do what I do and score the basketball,” he said. “It’s not that they don’t have players like me, they said they don’t have players with the mindset I have in terms of I want to score and I want to be the guy to take those shots, and that what I look to come in and do.” He added: “I’m just a guy that’s going to find my spots and take good shots and stay efficient. People tell me a lot I play like Carmelo Anthony so that’s a good comparison.” He joins small forward Ike Cornish and power forward Julian Reese in Maryland’s 2021 class. “I know Ike and Julian are good dudes, we talk a little bit and that’s good,” he said. Follow Adam Zagoria on Twitter Follow ZAGSBLOGHoops on Instagram And Like ZAGS on Facebook