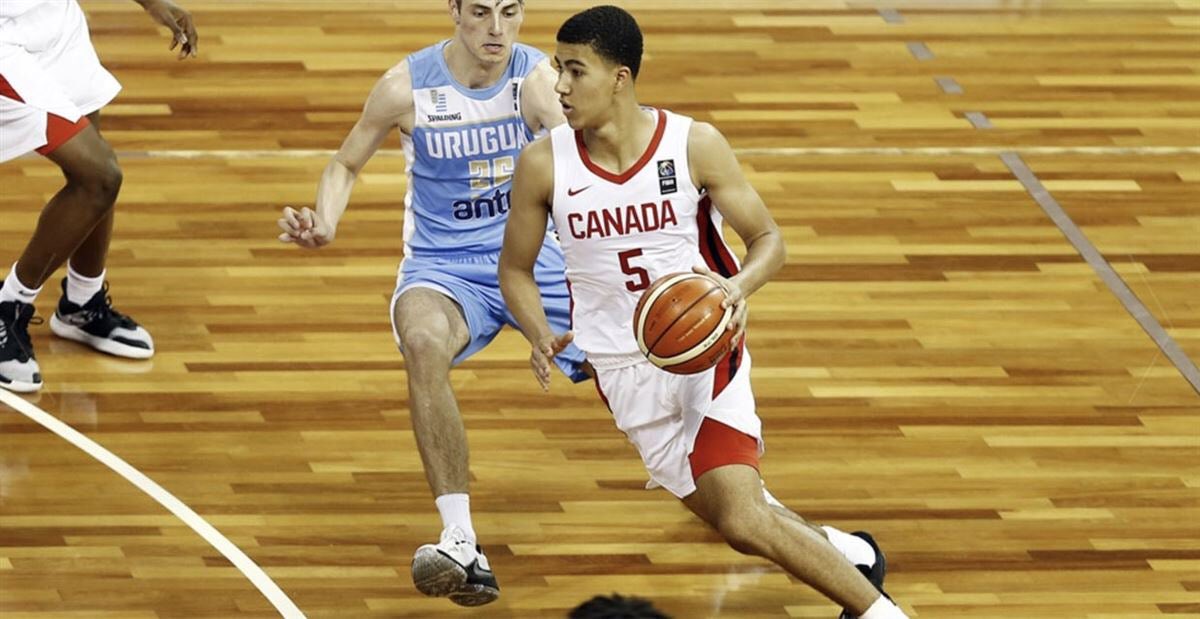 By ADAM ZAGORIA From Anthony Bennett to Andrew Wiggins to Jamal Murray to R.J. Barrett, a number of elite Canadian basketball players have opted to reclassify in recent years. Now here comes Caleb Houstan, the 6-foot-8 forward from Montervde (FL) Academy and the UPlay Canada AAU team. Houstan is expected to decide by the end of the summer whether he will reclassify to 2021 from 2022. He’s currently the No. 4 small forward in 2022 per 247Sports.com. “That decision is coming before the end of the summer, that’s for sure,” David Houstan, Caleb’s father, said Wednesday by phone from Mississauga, Ontario where Caleb is training with UPlay Canada. “He’ll make that decision before the end of the summer.” Since college coaches could begin calling Class of 2022 players on June 15, Houstan has added offers from Duke, Gonzaga. Arizona, Alabama and Arkansas, among others. If he reclassifies, he would go to college in 2021 and could then potentially enter the 2022 NBA Draft. Houstan turned 17 in January. “It’s not necessarily getting to the NBA earlier,” David said. “I think that that can be a mistake in many cases. It’s really a case of what he wants to accomplish, what he’s looking to do, what the opportunity is, and how he’s doing in school. “If he’s doing really well in school, if he’s having success, maybe he makes that decision. If there’s an opportunity at a school he really likes [ and wants to stay longer], maybe he does that. But at the same time he is academically available to go in 2021.” Montverde coach Kevin Boyle, who has coached Barrett and five other top-three NBA picks since 2011, said Houstan reminds him of Khris Middleton of the Milwaukee Bucks. “He reminds me a lot of Middleton and I don’t think there’s a question he’s going to be a pro,” Boyle said by phone. “I think he’s going to be a very good pro because he’s tailor-made for today’s NBA. He’s probably the best high school shooter in America. “I think he shot 53 or 54 percent from three last year and that’s every single day for the last two years. He’s just an incredible, incredible shooter, and when he’s open you feel like it’s going in. He’s got good range. He’s good shooting off screens and off of movement. He’s capable of being a big-time shooter and a guy you can run off screens to get good shots. He’s also an incredible worker.: As for his recruitment, Houstan is wide open at this point. “We are evaluating every opportunity,” David said. “He’s very thankful and appreciates the interest. He doesn’t take any of that lightly. But at the same time, he’s got to find a place that’s the right fit. “We’re very open right now and Caleb is not closing off anything. It’s really a case right now where we’re listening and trying to understand the situation better from the school’s perspective and how it applies to him.” Follow Adam Zagoria on Twitter Follow ZAGSBLOGHoops on Instagram And Like ZAGS on Facebook