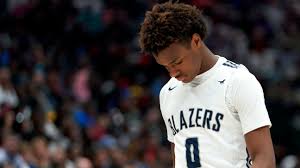 By JACOB POLACHECK With the news of five-star Makur Maker announcing his commitment to Howard University early Friday morning, Bovada has released odds on where Bronny James will play college basketball. Oddsmakers believe Bronny, the son of LeBron James, will follow in the footsteps of Maker and commit to an HBCU, as well with North Carolina Central having the best odds to land the 6-foot-2 Class of 2023 guard. The odds are listed below: North Carolina Central +120 Duke +125 Howard +600 North Carolina A&T +900 Kentucky +950 Kansas +1400 North Carolina +1600 UCLA +2000 Bronny is entering his sophomore season at Sierra Canyon (CA) High School. As a freshman, James averaged 4.1 points in 15 minutes per game and was Sierra Canyon’s only player to appear in all 34 games of the season. According to ESPN.com, James is ranked as the No. 4 point guard and No. 24 voerall player in the Class of 2023. Follow Jacob on Twitter Follow Adam Zagoria on Twitter And Like ZAGS on Facebook