Seton Hall's Mamukelashvili has 12 NBA interviews lined up, but is 'open to possibilities' | Zagsblog
Follow @adamzagoria

Seton Hall’s Mamukelashvili has 12 NBA interviews lined up, but is ‘open to possibilities’ 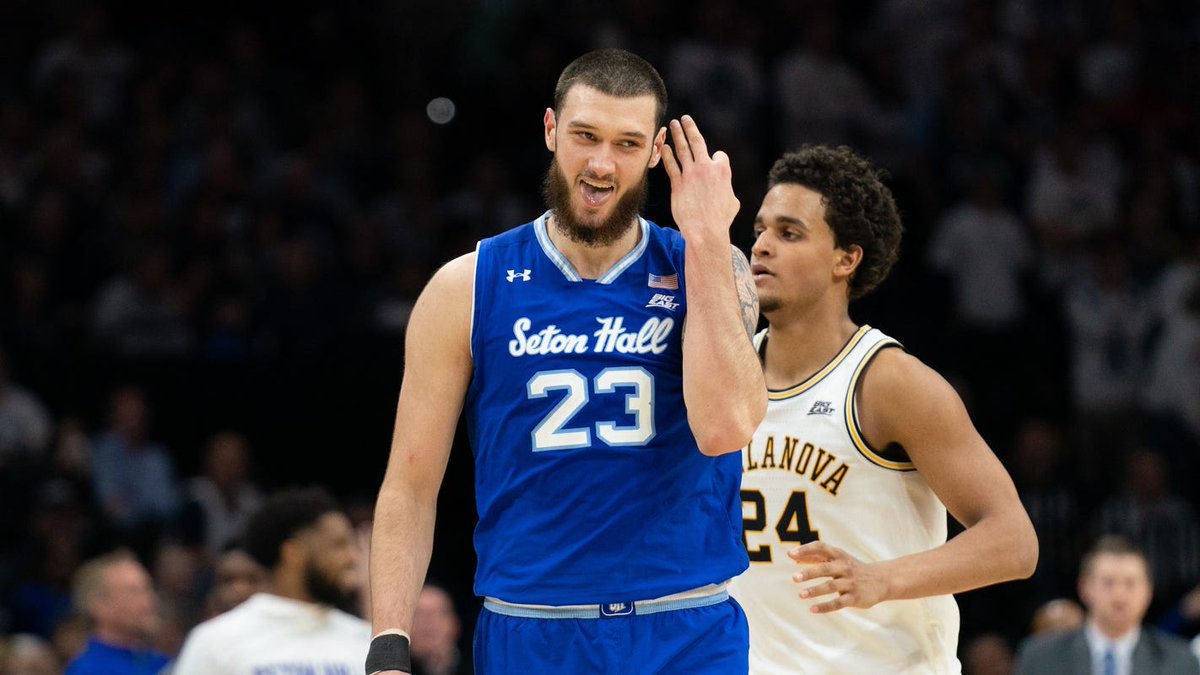 By ADAM ZAGORIA Seton Hall junior forward Sandro Mamukelashvili has a dozen interviews lined up with NBA teams but is “open to possibilities,” including potentially returning to campus for his senior season. The 6-foot-11 native of the Republic of Georgia is testing the NBA Draft waters, but cannot meet with NBA teams in person or work out for them due to the coronavirus pandemic. Instead, he will have virtual meetings with a dozen teams. “Mamu,” as he is known, is not currently projected on most major mock drafts. “I have 12 interviews scheduled and [it] depends how it all goes, but I’m in a great situation,” he told ZAGSBLOG. “I’d love to play one more year.” He added that he’s keeping his options open. “I’m still open to a lot of possibilities [and] returning is one of the options,” he said. The Georgian native averaged 11.9 points and 6.0 rebounds for the Pirates but missed seven weeks due to a fractured wrist. He was playing some of his best ball toward the end of the season, and went for 26 points, 9 rebounds and 3 assists in a Feb. 29 win at Marquette. Seton Hall won a share of the Big East regular-season title and was in line to be a 3 or 4 seed in the NCAA Tournament before the postseason was canceled. A year ago, Myles Powell tested the NBA Draft waters and then opted to return for his senior year. The Trenton native ended up winning a slew of awards, including Big East Player of the Year and the Jerry West Award as the nation’s top shooting guard. He was also a finalist for the Naismith Trophy and Wooden Award. Mamukelashvili could be in line to have a huge senior year assuming he returns as well. “I learned a lot from Myles,” Mamukelashvili told John Fanta in an Instagram live interview Thursday evening. “It was great playing with the seniors when I came my freshman year, but it was harder because I was not as close to them as I was to Myles. “But Myles taught me a lot, just seeing him get where he is today is an inspiring story. It shows how hard the guy worked. He was a true big brother for me. Every time I would have a bad game, he would tell me what he went through and what he did when he had bad games. And he would just tell me to shoot the ball and I just saw how he communicated with us and that’s what I learned the best.”

This one might be the best one yet !!! HISTORY MADE 🙏🏾🏆💙💫 pic.twitter.com/F7mnQvtFOO

Seton Hall will lose Powell, but is adding Harvard grad transfer Bryce Aiken, who averaged 22.2 points as a junior and 16.7 in seven games last season. Mamukelashvili has been in touch with Aiken and said he would love to play with him if he returns next season. Mamukelashvili also told Fanta he expects sophomore Jared Rhoden and freshman Tyrese Samuel to take big leaps next season. The Pirates will need all the help they can get because Villanova and Creighton will be favored in the Big East and contenders to reach the Final Four. Mamukelashvili is currently living alone in rural Pennsylvania during the pandemic and says he keeps himself busy training, playing Fortnite and watching Netflix. He has learned to appreciate nature and posted video to Tik Tok of what he said were two deer fighting. As for his workouts, he says he’s running, utilizing weights and bands and making use of a basketball court close to his home. “I just go there, do some ball-handling, shooting, work on my touch so I don’t lose it,” he told Fanta. “I feel like you should not take days off when you stay at home because you don’t have anything else to do. So if you take a day off, you just lose one day of working hard.” He’s keeping his options open for next season, but said if he does return he hopes to be a team leader. “I feel like however the situation works out, I’m ready to be a leader and I’m ready to be there for the guys who kind of need help and I just want to be the voice of the team and I just want to tell them, ‘We got this,'” Mamukelashvili told Fanta. Asked if he had a message for Seton Hall fans, he said: “We got something special We have a special team with a special group of guys and we are ready to go to war for them and for the University because they give us everything we need and everything we want. So it’s a great place to be.” TRAY JACKSON SIGNS / POWELL SIGNS WITH CAA / McKNIGHT SIGNS WITH MLA Seton Hall on Thursday officially announced the signing of Mizzou transfer Tray Jackson, who will sit one season to play three….Powell has signed with agent Drew Morrison of CAA Sports. He is not projected in the latest mock draft from The Athletic.

Former @SetonHallMBB G @Myles_MBP_23 tells me Drew Morrison will be his agent at CAA. https://t.co/ls0jfLtOS1