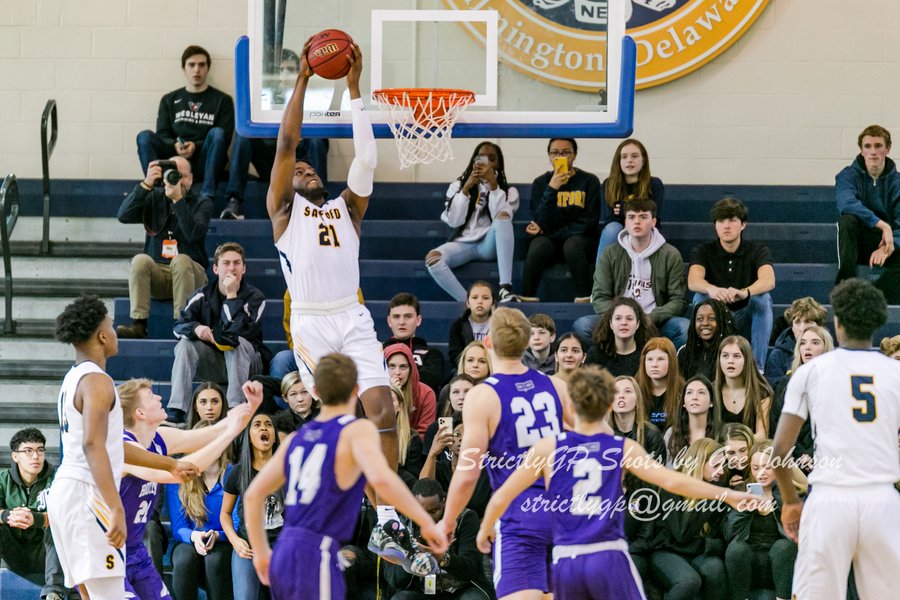 By ADAM ZAGORIA Nnanna Njoku, the 6-foot-9, 245-pound center from Sanford (DE) School, became Villanova’s first commit in the Class of 2021 on Sunday. The Philadelphia native chose Villanova over Michigan, N.C. State, Miami, Providence, Wichita State, Pittsburgh and Marquette, among others. “I picked Villanova, because not only is it close to home, but the culture that they have there is unmatched it’s something that you don’t see at all,” Njoku told 247Spoirts. “I went to Villanova for the first time when they won the National Championship and they had their Nova Mania the next season. At that point I said to myself ‘this is crazy.’”

Njoku is ranked the No. 15 center nationally according to 247Sports’ composite rankings and the No. 1 center in Delaware. Njoku averaged 16 points and 9 rebounds last season while shooting 73 percent from the field. He was a first-team All-State selection and a USA Basketball Junior National Team invitee. “He is a big, strong player who can score inside with both his right and left hand,” Sanford coach Stan Waterman said. “He has a very nice shooting touch out to the 3-point line. He’s an excellent rebounder and is an athletic, high-character kid with strong leadership skills. Villanova is the perfect fit for him as a player and person. “Nnanna has developed into a dominant player at the high school level and I expect he will continue to develop under the guidance of the Villanova coaching staff. I love everything about this young man as a player and person.” Villanova coach Jay Wright recently said that the potential cancelation of spring and summer recruiting this year due to the coronavirus pandemic would likely negatively impact his ability to recruit for 2021. So the addition of Njoku gives him at least one player in that class. Villanova currently has no commits in 2020. “I don’t think this is going to affect us in recruiting with the 2020 class,” he said, “but it’s definitely going to affect us with the ’21 class the way we recruit. Not being able to get out in the spring to evaluate, we’re not getting guys on campus in the spring. “But if it affects us and hurts us a little bit, so what? Suck it up. There’s a lot more important things going on in our world right now.” Villanova freshman Jeremiah Robinson-Earl recently announced he will withdraw from the NBA Draft and return for his sophomore season, while sophomore Saddiq Bey is expected to continue the draft process. Wright expects to rely more next season on current freshman guards Chris Arcidiacono, the younger brother of former Villanova star Ryan Arcidiacono, and Bryan Antoine, as well as freshman forward Eric Dixon. Follow Adam Zagoria on Twitter And Like ZAGS on Facebook