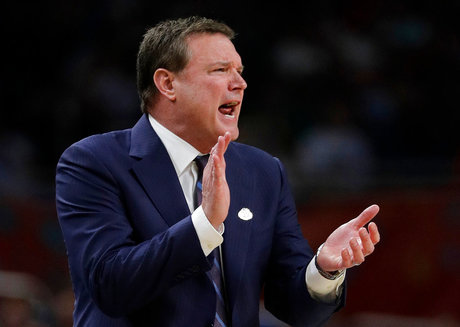 coach Bill Self announced that Isaiah Moss will transfer from has signed a grant-in-aid agreement to play men’s basketball at KU. Moss, a 6-foot-5, 208-pound guard player from Chicago, initially committed to Arkansas on May 15 but then . He was a for the Hawkeyes and averaged 9.2 points, 2.9 rebounds and 1.8 assists per game in 2018-19. He will be immediately eligible to the Jayhawks in 2019-20 as a .

“We’ve obviously been looking for shooting throughout this and we feel like we have addressed some of those needs with Isaiah’s addition,” Self said. “When Isaiah is on the court, he’s going to be a guy that could be a 40-45 percent 3-point shooter and with the line moving back, I think it’s going to be even more important to have somebody who’s consistently good from beyond the arc.”

Moss will enter the final season of his collegiate career having double figures 43 times, including netting 20 points or more . He was the recipient of Iowa Basketball’s Most Improved Player Award each of the last two seasons (2018, 2019) and needs just 94 more points to reach 1,000 for his career.

“Isaiah was a very good player on a very good team at the University of Iowa,” Self added. “He’s played in big games. He’s certainly used to of our sport after playing in the Big Ten and has been and drilled. He also a top high school program at Simeon (Career Academy) in Chicago. I’m very excited about him and the opportunities that he will give us to stretch the floor and certainly play with a couple really good big guys.”

Moss is the fourth newcomer to sign with Kansas prior to the 2019-20 season. He joins combo guards Isaac “Mackey” McBride from Little Rock, Arkansas, and Christian Braun (pronounced Brown) from Overland Park, Kansas, as well as wing Tristan Enaruna from Flevoland, Netherlands.
(Release via KU) Follow Adam Zagoria on Twitter And Like ZAGS on Facebook