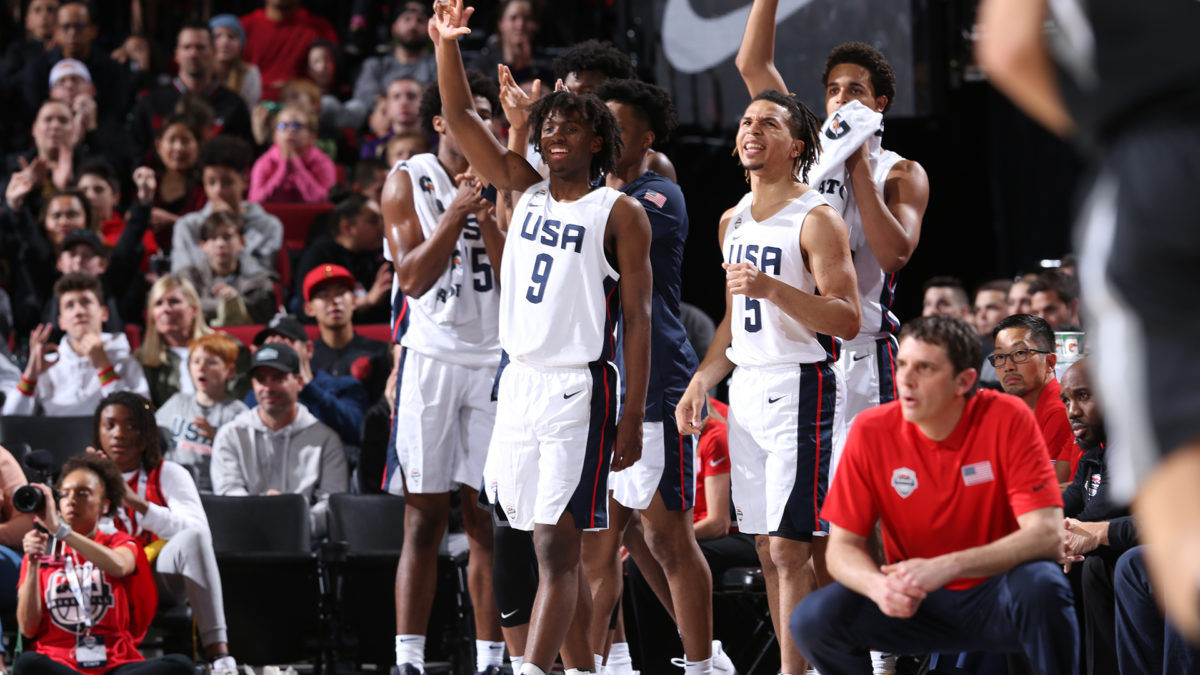 By ADAM ZAGORIA Cole Anthony and Nico Mannion, the two top point guards in the Class of 2019, showed out in the Nike Hoop Summit. The uncommitted Anthony went for 25 points and 8 rebounds as the USA beat Team World, 93-87, in Portland, Ore. Mannion, who reclassed up to 2019 from 2020 and committed to Arizona, had a game-high 28 points and 5 assists in the loss. “I think we started off pretty slow,” said Anthony, who last month was named the MVP of the McDonald’s All-American Game. “I mean, I had a killer time in the beginning, so I had a slow start. I think that’s what gave them their confidence for the rest of the game. I have to give a lot of credit to the World Team. They came ready to play. Obviously, we had a slow start, but I think that we just fought through it, and as the game went on, as a team we didn’t divide. We stayed together. I am proud of everyone on the team for that.” Anthony is considering North Carolina, Oregon, Georgetown and Notre Dame and is expected to announced sometime this month.

Uncommitted @The_ColeAnthony with 25 in the win. Anthony was already the MVP of the @McDAAG Arizona-bound @niccolomannion with 28 and 5 dimes for the losers pic.twitter.com/SAXYl997Vl — Adam Zagoria (@AdamZagoria) April 13, 2019

Mannion, who has played for Italy in world competition, was also highly impressive in front of the 165 credentialed NBA personnel, controlling the tempo, dishing and getting his shot. “James Wiseman, Nico Mannion and Precious Achiuwa were the three best players in the floor,” one NBA executive said. The 7-1 Wiseman, who went for 12 points, 8 rebounds and 6 blocks for Team USA, is committed to play for Penny Hardaway at Memphis. He could be the No. 1 pick in 2020, as I wrote here on Forbes SportsMoney. The 6-9 Achiuwa, a Nigerian native who had 15 points and 11 rebounds the Team World, is considering North Carolina, Kansas and Memphis, among others, and is expected to announce in May.

Mannion played last summer with Italy, where his mother Gaia is from. “A big part of that decision was me being able to go to Italy last summer and play with the men’s team,” he said. “You can’t do that here in the USA. To be able to go over to Italy and learn from those guys on and off the court was a big part of the decision for me.” Like Anthony’s father, Greg, who played in the NBA with the Knicks and Blazers, Pace Mannion also played in Italy, where he met Nico’s mother. “He’s been the biggest influence in my life,” Nico said. “He’s been there since day one. I grew up around the gym because he was playing, so that’s how I got involved with basketball. I fell in love with it from the beginning. He’s never really been the dad to make me work out or force me to do anything, but he’s always been there for me and been supportive.”
Follow Adam Zagoria on Twitter
And Like ZAGS on Facebook