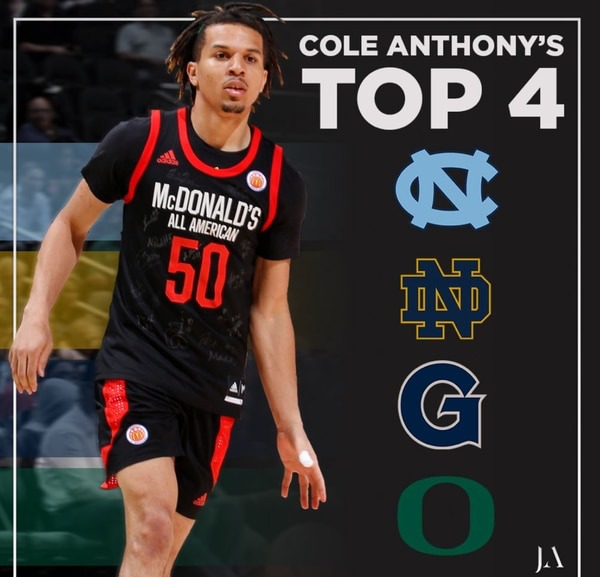 By RYAN McMULLEN Cole Anthony, the top uncommitted point guard in the nation, has trimmed his list to four schools. The 6-foot-3 Anthony out of Oak Hill Academy (VA) is down to Georgetown, North Carolina, Notre Dame, and Oregon. He eliminated Miami and Wake Forest from contention. He recently broke down his remaining schools for ZAGSBLOG. Anthony has visited all four officially and expected to make his decision within the next month. This year playing under legendary coach Steve Smith, Anthony averaged 17.8 points, 10.0 rebounds, and 10.0 assists. Oak Hill will compete in the GEICO Nationals, taking on Wasatch Academy on April 4 at 6 p.m. at Christ the King High School. According to 247Sports, Anthony is ranked No. 3 nationally and is the No. 1 combo guard. Follow Ryan on Twitter Follow Adam Zagoria on Twitter And like ZAGS on Facebook