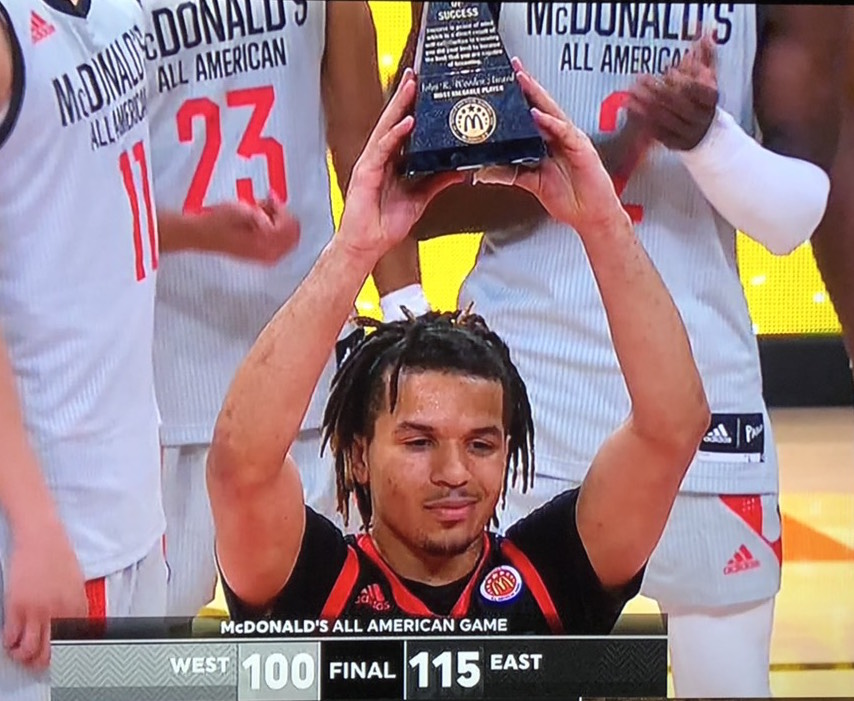 By ADAM ZAGORIA New York City native Cole Anthony was named the MVP of the McDonald’s All-American Game on Wednesday night. The 6-foot-3 Anthony went for 14 points, 7 assists and 5 rebounds with no turnovers to lead the East team to a 115-100 win over the West in Atlanta. “It means a lot, I don’t even want to take most of the credit for this,” the Oak Hill Academy (VA) point guard said on ESPN2. “There are a couple of dudes on this team who could’ve been named MVP. I mean we have multiple dudes in double-digits. That just shows you how unselfish our team is, so I just want to give most of the credt to the rest of my team.”

Washington-bound big man Isaiah Stewart had 16 points and 5 rebounds in the win, while uncommited wing Precious Achiuwa had 22 points and 9 rebounds. Memphis signee James Wiseman had 13 points and 6 rebounds for the West, and Villanova-bound forward Jeremiah Robinson-Earl had 13 and 4. Anthony, the son of former NBA point guard Greg Anthony, is down to five schools in North Carolina, Oregon, Georgetown, Wake Forest and Notre Dame, and plans to announce sometime in April. The No. 2-ranked player in 2019 according to ESPN.com, he’s the projected No. 6 pick in the 2020 NBA Draft. Anthony will play with Oak Hill in the GEICO High School Nationals in New York (April 4-6), followed by the Nike Hoop Summit (April 12) and the Jordan Brand Classic (April 20), so he could announce at one of those events. Anthony said this week he’s looking for a team he can lead from the beginning that also has the chance to make a Final Four. “It’s essentially free agency, so what’s happening with other players, where can I get in where I can fit in,” ESPN’s Jay Williams said on air. After winning the award, Anthony shouted out his AAU program, the PSA Cardinals and director Terrance “Munch” Williams, a Wesleyan University grad. “He played very well tonight,” one NBA scout said of Anthony. “He loves the big stage. He’s a scoring point guard who’s quick, gets into the lane easily and finishes with either hand.” Follow Adam Zagoria on Twitter And Like ZAGS on Facebook