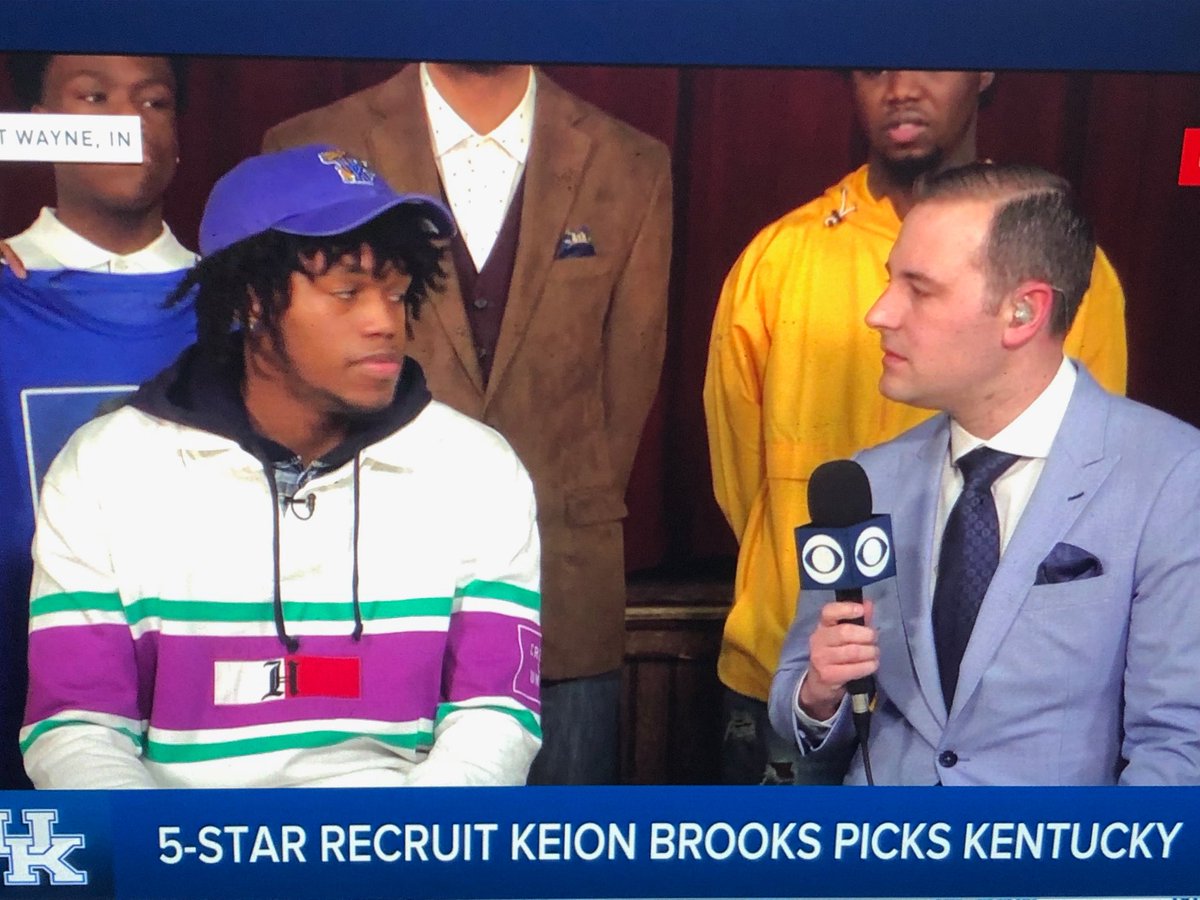 By ADAM ZAGORIA John Calipari got some good news in the middle of the SEC Tournament. Keion Brooks, the 6-foot-7 small forward from La Lumiere (IN) School, announced his commitment to the Wildcats Friday night. “Next season I’ll be attending the University of Kentucky,” he told Evan Daniels of 247Sports.com at his announcement. “I think at the end of the day, it just came down to the relationship that I’ve built with Coach Cal. He’s always told me he can put me in a position to where I can reach and achieve my goals. When I sat down and talked to him for the last time, I felt very comfortable in making my decision to go to Kentucky.” He also considered Indiana, Michigan State, North Carolina and Purdue. Brooks took official visits to Indiana (Sept. 28), Kentucky (Oct. 19), and North Carolina (Nov. 2). His most recent visit was to Kentucky on Feb. 16 for an unofficial when the Wildcats defeated then-No. 1 Tennessee and Calipari visited with Brooks this past Tuesday. Sources had indicated Kentucky was the favorite for Brooks, who is ranked as the No. 23 overall player in the Class of 2019 and the No. 3 player from the state of Indiana per 247. “What [Calipari] said was that he wanted me to come in and be a basketball player and play hard,” Brooks said. “Be able to score the ball and be versatile on offense and defense. He said I’m kind of what they’re looking for now in the new modern era of the NBA, long, athletic, I got a good feel for the game, so I feel like he can help me get there.” He added: “Kentucky’s a blue blood school that has a rich tradition and [Calipari] feels like I can be a part of that immediately.”

Brooks was named to the ZAGSBLOG Hoophall All-Tournament team in January after going for 25 points on 7-for-12 shooting with 5 rebounds and 3 blocks in La Lumiere’s 73-50 win over DeMatha Catholic. “He’s a guy who’s a hybrid forward at 6-8,” said longtime New York recruiting expert Tom Konchalski. “He’s not as thick as Isaiah Stewart but he’s a guy who can score in or out and he’s obviously a very good athlete. He’s one of the better forwards in the class, he’s a McDonald’s All-American.” Said La Lumiere coach Pat Holmes: “Every single day he comes to practice ready to work, ready to get better. Receives coaching and takes coaching, wants to know what he can do to go get better and help the team get better.” He added: “I think that’s what you’re going to get at Kentucky. You’re going to get a guy that’s going to work hard every day, is going to spend countless hours in the gym by himself or with a coach, and he’s just a high-character person off the court.” Brooks joins guards Tyrese Maxey and Dontaie Allen and wing Kahlil Whitney in Kentucky’s 2019 class, now ranked No. 2 by 247Sports.com. “Tyrese, he’s been recruiting me for a very long time now,” Brooks said. “Even before he committed, he was recruiting me to go there. Kahlil, I feel like me and him going against each other in practice every day are going to make each other better. Iron sharpens iron, so I feel like with him and also Dontaie Allen, he’s pretty good as well. I feel like our class coming in is a pretty tough one. I feel like if we can really jell, we can make a push for a national championship.” Brooks will be a major boost to the Wildcats’ frontcourt as they are losing Reid Travis to graduation and likely P.J. Washington to the NBA Draft. Kentucky missed out on James Wiseman (Memphis), one of three finalists for the Gatorade National Player of the Year Award, Vernon Carey (Duke) and Stewart (Washington). They remain in play for 6-11 Seattle big man Jaden McDaniels, who has drawn comparisons to a young Kevin Durant. Follow Adam Zagoria on Twitter And like ZAGS on Facebook