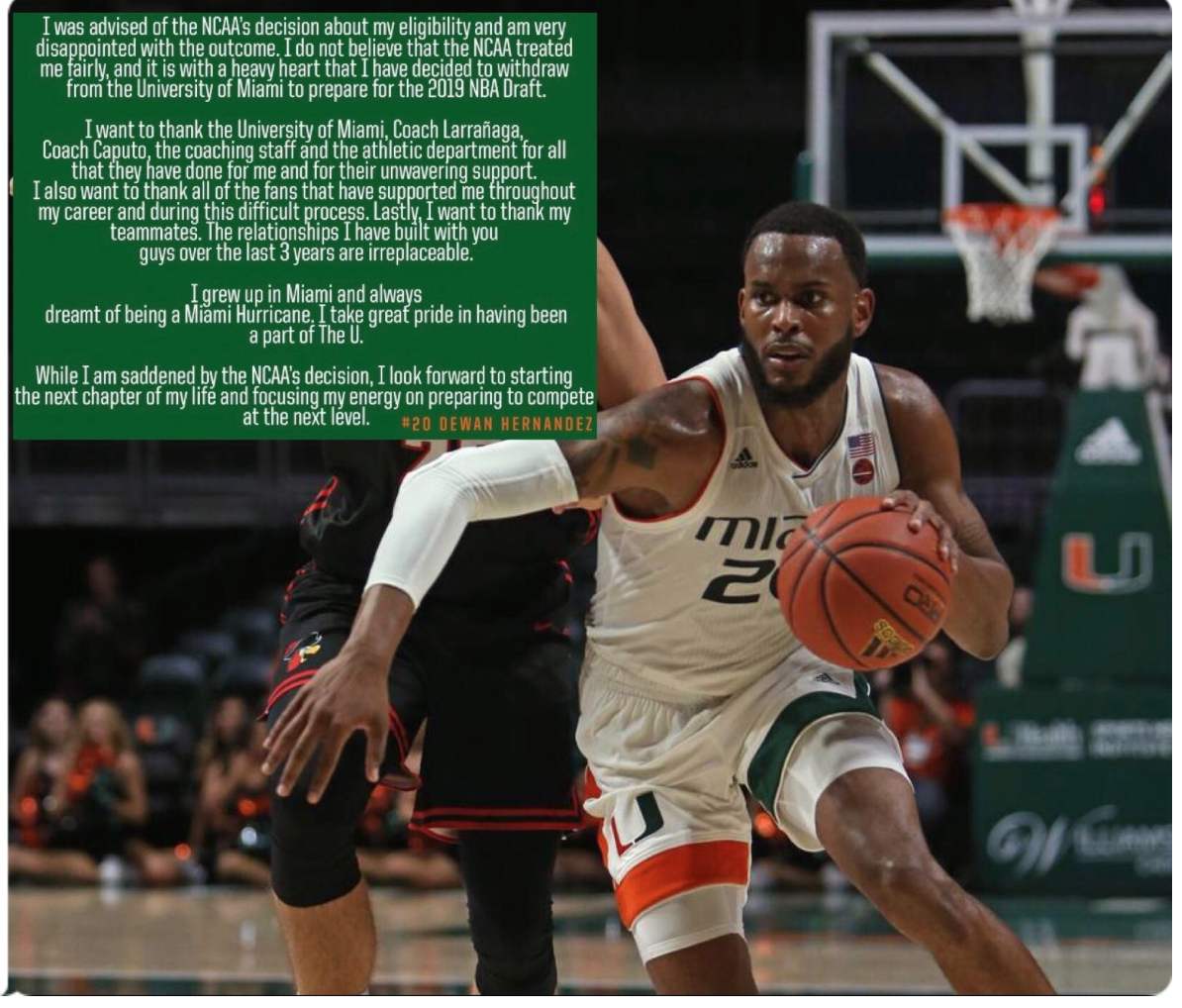 By ADAM ZAGORIA & STEVEN WINE In the wake of the NCAA’s latest ruling, Miami’s Dewan Hernandez says he’s leaving school to focus “on the next level” and will enter the NBA Draft. “I was advised of the NCAA’s decision about my eligibility and am very disappointed with the outcome,” he wrote on Instagram. “I do not believe that the NCAA treated me fairly and it is with a heavy heart that I have decided to withdraw from the University of Miami to prepare for the 2019 NBA Draft.”

The 6-foot-11 Hernandez has not played this season. He averaged 11.4 points and 6.7 rebounds as a sophomore. Hernandez agreed to receive monthly payments from an agent and accepted other benefits from him, the NCAA said. The violations could have resulted in permanent ineligibility but there were mitigating circumstances, the association said. Last year, following an FBI investigation, a federal jury in New York found three men — Adidas executive Jim Gatto, Adidas consultant Merl Code and runner Christian Dawkins — guilty of fraud charges for channeling secret payment to the families of top-tier recruits to influence their choices of schools, apparel companies and agents. Hernandez was among more than a dozen players listed in a business plan to pay prospective NBA players, and the NCAA began to look at his case. “The ruling is harsh and unacceptable,” Hernandez’s attorney, Jason Setchen, wrote on Twitter . “The NCAA is punishing the student-athletes for their involvement. But, who is punishing the NCAA for allowing corruption to be so rampant in college basketball that the FBI intervened?” Earlier this month, Hurricanes coach Jim Larranaga said Hernandez deserved to be declared eligible because he unwittingly became entangled with the agent when duped by a coach. The coach, Jordan Fair, was an assistant at Louisville before being fired after the scandal broke in 2017. Hernandez, a Miami native who changed his name last offseason from Dewan Huell, was highly recruited before joining the Hurricanes in 2016. He considered turning pro last spring but decided to return to Miami for his junior season. With Hernandez watching Sunday from the bench, the Hurricanes lost to Florida State and fell to 1-6 in the Atlantic Coast Conference, their worst league start in eight years under Larranaga. They are 9-10 overall, and Larranaga is in danger of his first losing season since 1997-98, his first year at George Mason. (The AP contributed) Follow Adam Zagoria on Twitter And Like ZAGS on Facebook