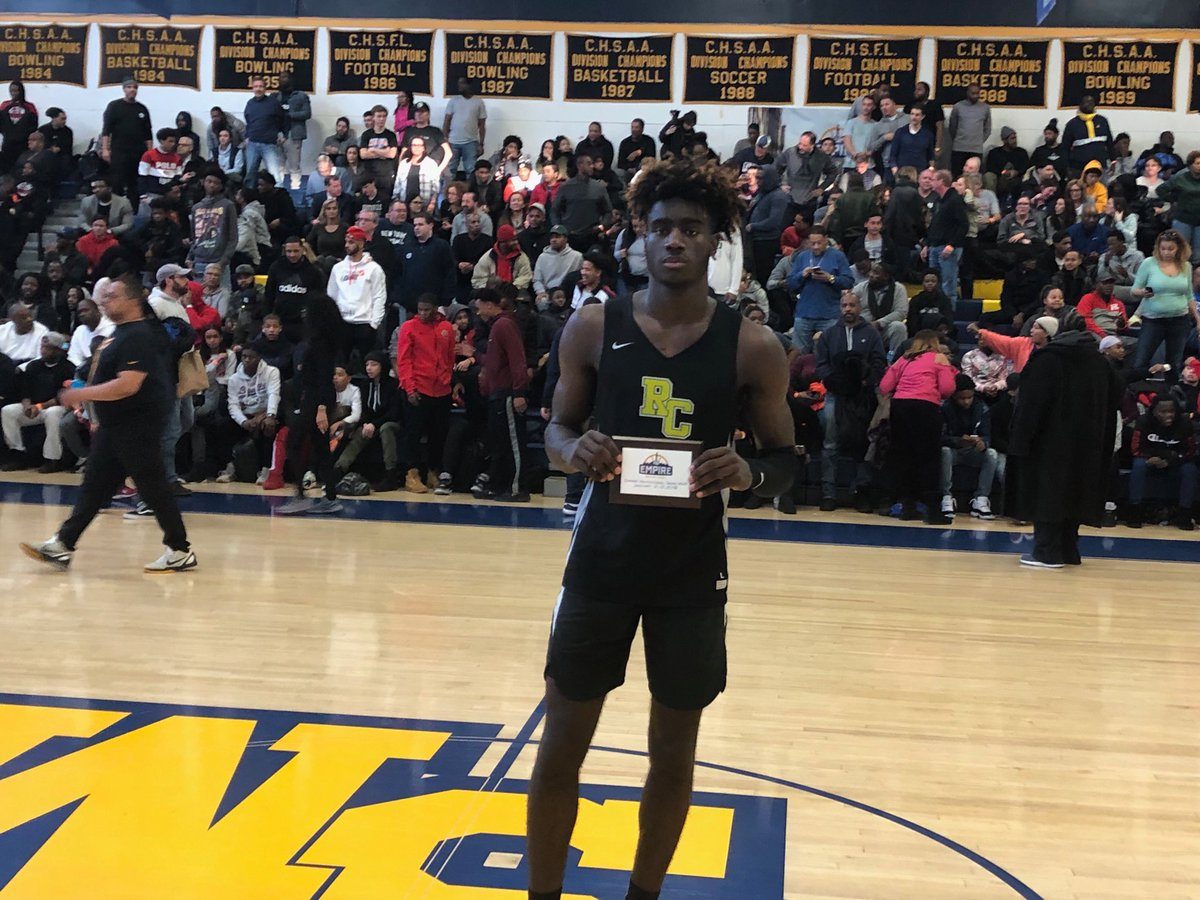 By ADAM ZAGORIA NEW YORK — In a matchup featuring the reigning state champions from New Jersey against their counterparts from New York, Kentucky commit Kahlil Whitney proved the difference. The 6-foot-7 senior wing went for 24 points and 11 rebounds en route to MVP honors as Roselle (N.J.) Catholic fended off a tough challenge from junior guard R.J. Davis and Archbishop Stepinac, 70-60, at the Empire Invitational at Mount Saint Michael Academy in The Bronx. “I guess you could say it’s a little bit of bragging rights, but I felt like we came out as a team, as whole, played great and we got the win. That’s what it’s about,” said Whitney, whose team is now 13-0 as it pursues its second straight New Jersey Tournament of Champions title.

Davis, an uncommitted junior point guard, went for 29 points, 8 rebounds and 4 assists as Stepinac (3-11), the reigning New York State Federation champions, continued to struggle without injured sophomore star A.J. Griffin. Griffin, the son of former Seton Hall star and current Toronto Raptors assistant Adrian Griffin sat on the bench with a boot on his left ankle and will be reevalated later this week. Roselle Catholic is ranked No. 2 in New Jersey behind the Ranney School, which features Villanova-bound guard Bryan Antoine and Florida signee Scottie Lewis, and lost to the MacDuffie School (MA), 79-75, immediately after RC won. RC and Ranney are slated to meet Jan. 30 at Brookdale Community College in a matchup of 1 vs. 2. For his money, Stepinac coach Pat Massaroni thinks the Lions are New Jersey’s best team. “I think they’re the best team in the state,” Massaroni said. “Nothing against Ranney and Bergen Catholic or any of those guys, I just think they’re so well-rounded, so well-coached and I thought our guys really, really battled. The score doesn’t reflect [how close the game was]. Our guys fought. “Obviously you’d love to play anybody at full strength but nobody’s feeling sorry for us. It was a great battle, they were victorious.” Whitney, who plans to sign with Kentucky in April in his hometown of Chicago, shot 11-of-26 from the field, so it wasn’t the most efficient game for him. Yet he controlled the tempo offensively, threw down several dunks and played strong defense on Davis down the stretch. “Kahlil’s playing great,” RC coach Dave Boff said. “Today he had to handle the ball a little bit more which he can do. I thougth he made good decisiosn out of the double-team. He did what he does, put points on the board, got rebounds and helped lead us.” “There’s a reason he’s going to Kentucky, that’s all I’ll say,” Massaroni said of Whitney. “Beyond a future pro, his game and his skillset, he’s so smooth and calm out there. He doesn’t force anything, he’s long and athletic.”

After trailing 32-24 at the break, Stepinac closed to within 49-43 after three. Davis had a huge second half, scoring 16 of his 29 after the intermission, but RC outscored Stepinac 21-17 in the fourth. “I’m proud of my team’s effort, we fought hard,” said Davis, who’s being recruited by Cincinnati, St. John’s, Seton Hall, Penn State, Pitt, Maryland, Manhattan, and George Washington, among others. “Towards the end we definitely executed well on the defensive and offensive end.” Asked what the loss showed about the state of New York basketball, Davis added: “New York basketball is always going to be top of the crop. As you can with today’s display of New York and New Jersey, it definitely shows why we’re in the discussion for best in the country.” As for RC, they have several big games coming up, including on Saturday at the Hoophall Classic in Springfield, Mass. against Brandon Boston and Norcross (GA) and then the Ranney game later this month. “For us this was simply another measuring stick, another opportunity, to get the chance to come to a great venue,” Boff said. “This is the first time we’ve played with [tournament organizer] Pat Lawless and the event was amazing. “It’s just a nice opportunity to play a team from New York City which we don’t do that often, and I thought the kids played great.”   UCONN COMMIT GAFFNEY LEADS WESTTOWN OVER BREWSTER With UConn coach Dan Hurley and Kimani Young on hand, UConn-bound point guard Jalen Gaffney won MVP honors after putting up 26 points, 4 assists and 4 rebounds as Westtown (PA) beat Brewster Academy (N.H.), 79-72. Syracuse commit John Bol Ajak added 18 points and 9 rebounds for Westtown while making 3-of-5 from beyond the arc and impressing with his shooting stroke. Miami-bound forward Anthony Walker went for 22 points and 10 rebounds for Brewster. Uncommitted sophomore wing Terrence Clarke had 17 points and 4 rebounds, N.C. State signee Jalen Lecque had 14 points and 10 rebounds and Cal-bound point guard Joel Brown notched 11 points and 3 assists.