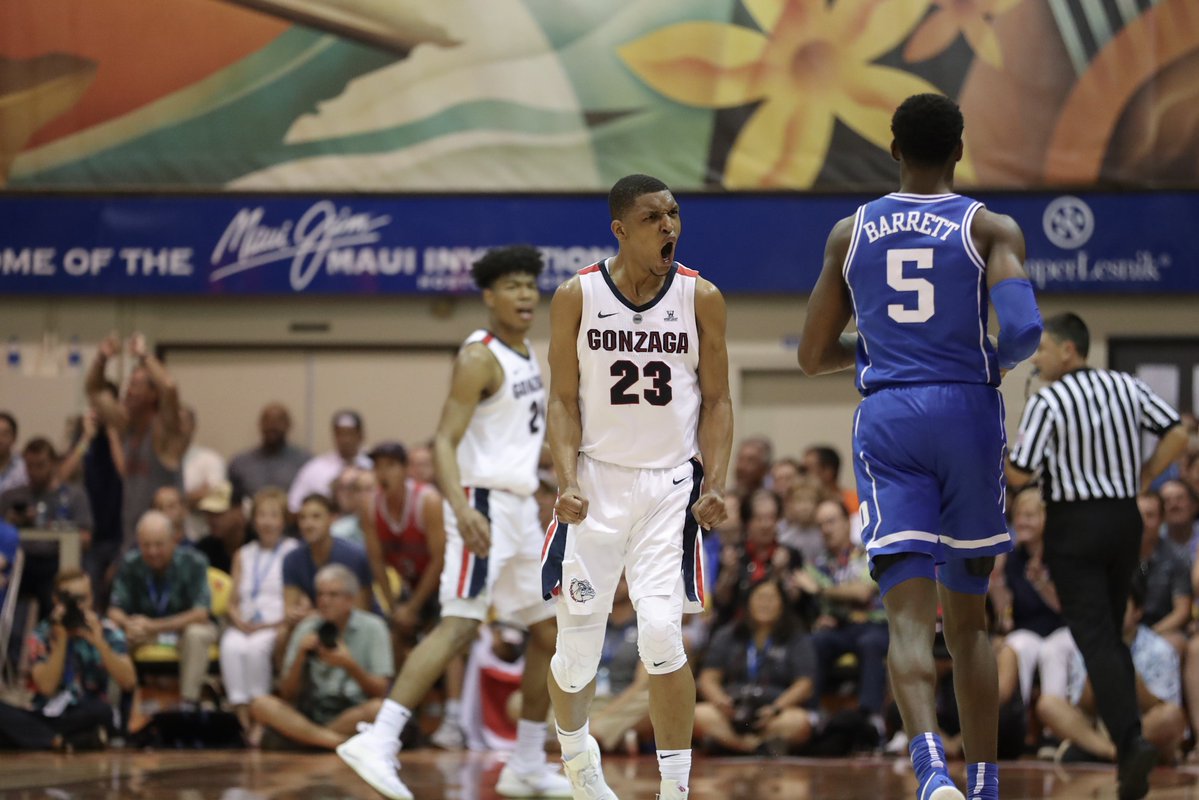 By ADAM ZAGORIA In the hours after Zion Williamson, R.J. Barrett and Duke shellacked Kentucky by 34 points to open the college basketball season at the Champions Classic, ESPN kicked its hype machine into high gear. “We got a shot at seeing a basketball team go that can go undefeated,” Stephen A. Smith declared on ESPN’s “First Take.” “It’s ridiculously early,” said his colleague Max Kellerman. “They have a chance to do what hasn’t been done in a long time.” There was even talk from ESPN’s Paul Pierce that Duke could beat the woeful Cleveland Cavaliers. Of course, Duke was never going undefeated, as I wrote at Forbes SportsMoney earlier this month. The Blue Devils still had to navigate the loaded Maui Invitational field, not to mention the rigors of the ACC regular-season schedule. And sure enough, it was a veteran No. 3 Gonzaga team — with juniors Rui Hachimura and Brandon Clarke and sophomore Zach Norvell but without injured junior Killian Tillie — that finally beat No. 1 Duke in an epic Maui Invitational final, 89-87. Gonzaga’s second Maui Invitational title resulted in Duke’s first-ever loss at the event. It’s only November, but the game had the feel of a Final Four contest played in a high school gym. More than 30 NBA GMs and scouts were on hand to watch a game that featured four projected lottery picks in Williamson, Barrett, Duke’s Cam Reddish and Hachimura. Duke is looking to become just the second team after Florida in 2007 to have three players taken in the Top 10 of the NBA Draft. Duke (5-1) will likely fall from its No. 1 perch on Monday, with No. 2 Kansas or the Zags expected to replace them. Duke was attempting to become just the second team to beat three Top 10 teams before the end of November, joining the 2012-13 Blue Devils. After trailing by double-digits, Duke closed to within 81-75 on a Williamson dunk with about 5 1/2 minutes remaining.

Zion, look at this insane explosiveness

Barrett followed with a breakaway dunk over Hachimura to cut it to 81-77. Tre Jones hit a floater with 2:27 left to cut Gonzaga’s lead to 86-85. Williamson tied it at 87 with a strong pmove in the post, but Hachimura made a layup to make it 89-87 with a little over a minute left. With Barrett wheeling in the lane with about 30 seconds left and attempting to tie the game at 89, Hachimura blocked Barrett’s shot. Clarke then missed two foul shots on the other end. Duke had looks from Barrett and Jack White to tie it, but neither connected and Hachimura snatched the rebound. But Hachimura missed two more foul shots, giving Duke a final chance to tie or win it. Barrett drove the lane but met Hachimura and and Clarke appeared to block his shot. For the first half and part of the second, Duke looked young and tired while playing its third game in three days. Duke, known for its highlight-reel dunks during the early portion of the season, missed two dunks in the game, one on a breakaway by Jones and one from point-blank range by Williamson which led to a Gonzaga 3-pointer.

Duke was never going undefeated, but they will continue to be one of the best teams in the nation, and the talented frosh will only learn from this game going forward. If we’re lucky, the basketball world will get another game between these teams during the Final Four. Follow Adam Zagoria on Twitter And Like ZAGS on Facebook