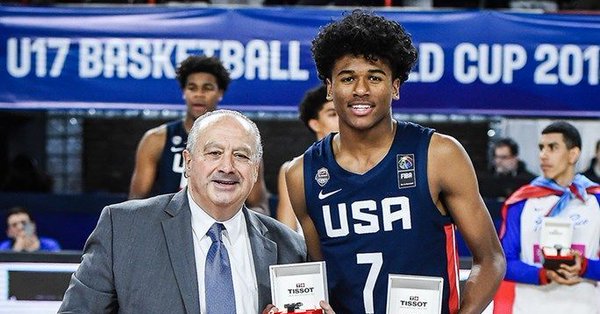 By DANIEL YNFANTE NEW YORK —  On Saturday, the seconds ticked with the score tied at 61 at Basketball City in Manhattan. Pump N Run’s Julien Franklin drove to the basket and dished out a pass to Ethan Anderson, who was open on the right corner and connected on a buzzer beating triple to seal a 64-61 victory over Team EBO in the Adidas Gauntlet Finale. But the shot wasn’t what people were talking about after the game. Instead, it was the performance of a 6-foot-5, 170-pound 16-year-old. In front of coaches from UCLA, USC, Kansas, Cincinnati, San Diego State and Washington, Team EBO’s Jalen Green stole the show in defeat. Kentucky’s John Calipari also watched Green on Friday. The junior is the No.1 ranked player in the Class of 2020 according to 247Sports.com. On Saturday, Green scored 26 points, to go along with 6 rebounds and 4 assists. Green has received offers from over a dozen schools, including Arizona, Kansas, UCLA, USC, Villanova, Washington and Oregon. However, when asked to comment about his recruitment, Green declined. “I don’t really talk about that. I’m not focused on that,” Green said.

Former NBA coach Lionel Hollins, now in charge of Team EBO, says that he hasn’t seen as many players as gifted as Green. “He’s a very talented kid,” Hollins said. “A lot of coaches are looking at him and to be such a young player, he’s really advanced. To think that he’s going to be a junior next year, and what he’s doing out here against a lot of guys that are going to be seniors next year is pretty amazing.” Green impressed college coaches over three games at the Adidas tournament, averaging 20.5 points with 5 rebounds per contest. He believes having the coaches in attendance didn’t add any extra pressure. “It’s good to have the coaches here, but I don’t really pay attention or care for it too much,” Green said. “I just try to lock in on my game and do what I do.” Green headed into the Adidas Gauntlet after a notable performance for Team USA at the FIBA U17 World Cup, where he took home the tournament’s MVP award on July 8. But after the World Cup, Green was faced with a new task: Play the point guard position for his AAU team. “I just came back from Argentina where I was playing in a system, so playing like that and then switching to being a point guard is a hard transition,” Green said.

6-5 + 16-year-old Jalen Green was rightly named #MVP of the @FIBA U17 World Cup, as he was the most productive player on the dominant #USA team despite being its youngest member

Green says he’s working on his half-court offense and his jump shot this summer, in case his coaches decide to play him more at point guard. Right now, Green describes his game as, “A slasher. I get to the rim. I like to pass the ball and play defense.” On Saturday, Green proved he could handle running a half-court offense. He handed out 4 assists and didn’t turn the ball over. He went to the free throw line 15 times, and over the last two games, attempted 28 free throws. “To think about how young he is and what he’s doing out here with the poise and with the athleticism and ability to get to the paint and get fouled is pretty amazing,” Hollins said. Follow Daniel on Twitter Follow Adam Zagoria on Twitter And like ZAGS on Facebook