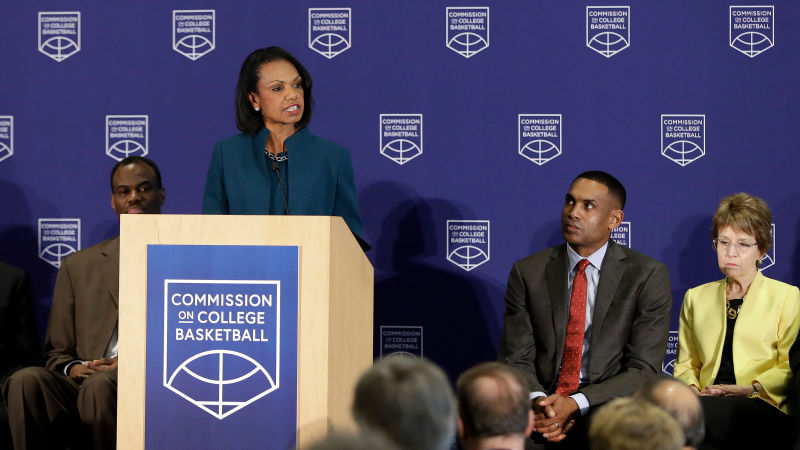 By ADAM ZAGORIA NORTH AUGUSTA, S.C. — Kevin Durant, Chris Paul and Worldwide Wes were among the celebrities who made appearances at the Nike Peach Jam this week, but Condoleeeza Rice was nowhere to be found. Unless she magically shows up for Sunday’s final between Team Takeover and Team WhyNot (ESPNU, 2 p.m.). Rice, of course, chaired the Rice Commission which in April released a 60-page report that proposed the NCAA run its own summer recruiting events for recruits and take a more stringent approach to certifying what it called non-scholastic basketball events. The recommendations have led to rampant concern and speculation over what the future of summer basketball might look like — including the possibility that next year’s Peach Jam won’t feature college coaches or could be held in August, or both. Considering that the Peach Jam is the crown jewel of the summer grassroots recruiting calendar, one might have imagined that Rice — and perhaps some of her fellow Commission members — would have attended the event, taking some notes, observing and speaking to some of the many of the coaches, players and others in attendance. “Condoleeza Rice is a very plausible candidate for the Presidency of the United States,” longtime New York basketball expert Tom Konchalski told me. “But this is not her field. I think she probably has more weighty and more worthy matters to discuss [than AAU basketball]. I’d rather see Condoleeza Rice as President of the United States than President of the NCAA.’

And let’s go to a live look at @CondoleezzaRice sitting courtside at Peach Jam taking diligent notes to ensure that her proposals are well thought out and based on actual knowledge rather than innuendo pic.twitter.com/JYfsXhwkSY

I will tell you who I haven’t spotted yet, @CondoleezzaRice. I’m just going to assume she’s in another gym or at least watching a live feed. #PeachJam

Indeed, several of the more well-respected AAU coaches on the circuit had strong opinions on the matter. Jimmy Hart, head coach of the Albany City Rocks, believes the powers that be should turn to someone other than Condoleezza Rice “I think they should ask someone like Jay Bilas, not Condoleezza Rice or people who haven’t gone to AAU games,” he told FloHoops.com. “They should ask somebody who knows.” Andy Borman, who played at Duke and now coaches the NY Rens, wondered why Rice hadn’t made an appearance at Peach Jam to meet with some of the people her Commission would be affecting. “I don’t know how they’re handling that, whether it’s a Committee vote or a one-person vote, but I think if you’re even remotely involved in the game of basketball, you should be here,” Borman told me. Borman made the point that the Peach Jam “is what’s pure about the game” because kids are competing for a championship under coaches who are making them better. Borman also pointed out that the “NCAA is already in charge of everything we do.” “Every single player that’s here right now went through the NCAA BBCS system. Every single one of them logged in, watched a video, accepted an invitation to join our roster,” he said. “Every single coach is already certified by USA Basketball. Every single live period has to get approved by the NCAA. “They have 100 percent oversight over what we’re doing right now. No one’s talking about that. They’re already in charge.” He added:  “There’s nothing wrong with reform but you can’t say, ‘Oh, we’re going to step in and now we’re going to clean up and make it the beautiful game again. You are already in the room. What are you talking about?” Borman added that a former Nike EYBL U17 coach is currently the head coach at the University of Memphis, Penny Hardaway, underscoring that those coaches are well-regarded and respected. “Not at a small school, at Memphis, these guys are pros,” Borman said. Had Rice shown up, she could have talked to Paul and Durant, current NBA stars who were either coaching or watching the next generation of stars like Cole Anthony, Cassius Stanley, James Wiseman, Vernon Carey and Isaiah Stewart.

She could have also tried to interview Worldwide Wes, once called “The Most Powerful Man in Sports,” and Duke’s Mike Krzyzewski , who sat side-by-side for Friday night’s great matchup between Team Takeover and the Bluff City Legends.

Coach K and Worldwide Wes among those taking in the action. @FloHoops pic.twitter.com/GcXZECtKZm

If Rice had shown up at Peach Jam, Borman would have told her, “Just sit and watch. Talk to the kids, talk to the coaches. Talk to anyone within a mile of this building and tell me what you see that’s wrong with this.” Follow Adam Zagoria on Twitter And like ZAGS on Facebook