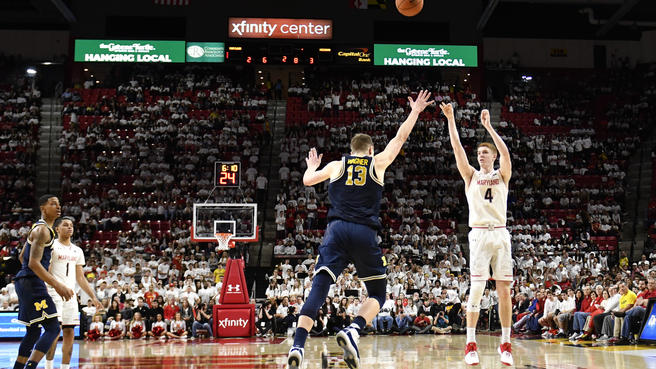 By ADAM ZAGORIA Maryland sophomore guard Kevin Huerter intends to keep his name in the NBA Draft and sign with Priority Sports. “First off, thank you Terp Nation…for everything,” said Huerter. “The last two years playing for Maryland, and at XFINITY Center has been a dream come true. To all my teammates, past and current, not much needs to be said; you’re all my brothers. I waited [until the] last minute because I truly didn’t know what I was going to do. I love College Park, playing for Coach Turgeon, and everything else that comes with being a student at Maryland. But, I will be keeping my name in the draft, with the intent to hire an agent.” The Clifton Park, N.Y., native averaged 14.8 points, 5.0 rebounds and 3.4 assists last season for the Terps. “Kevin has made a significant impact on our program during his two seasons in College Park,” said head coach Mark Turgeon. He has worked extremely hard to put himself in this position to be drafted by a NBA Franchise. Kevin is an outstanding young man who comes from a great family and has a bright future ahead of him. This was a difficult decision for both Kevin and his family knowing how much he loved Maryland and enjoyed college. However, Kevin took his time and gathered the necessary feedback provided by NBA teams to make the best decision. We’re excited for Kevin as he pursues this next step in his career.” Huerter most recently worked out for the Lakers last Friday before canceling a workout with the Jazz on Monday. He also worked for Boston, Atlanta and Brooklyn. “I made shots today but I think that’s something I’m trying to do as I go through this process, is show I can do more than shoot and get to the basket and get guys open shots and create for other people,” Huerter said after his Lakers workout.

Kevin Huerter talks about his reputation as a shooter and how he envisions his game translating to the NBA. pic.twitter.com/Fbz0ugGxd6

Huerter impressed NBA scouts at the NBA Draft Combine in Chicago, going for 14 points (5-11 FG, 3-8 three-pointers) in his first game. He also posted a shuttle run of 2.96 seconds.

Kevin Huerter also appears to be helping himself so far. Looks automatic from NBA range with his feet set. Passing it well. Putting in a good effort in defensively. He’s grown over an inch since last year according to the measurements. Seems to have strong buzz among NBA folks.

He’s currently projected as the No. 19 pick in the NBA Draft to the Atlanta Hawks, per ESPN.com. “He’s definitely a first-rounder,” one source said. “He’s not getting out of the first round.” Photo: USA Today Sports
Follow Adam Zagoria on Twitter
And Like ZAGS on Facebook