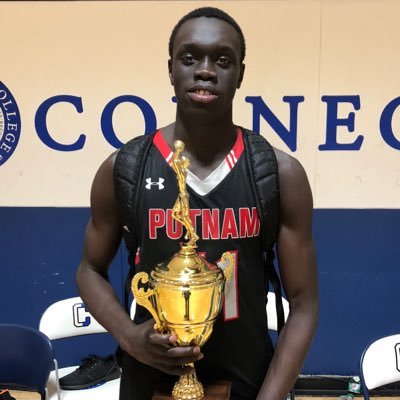 By ADAM ZAGORIA Akok Akok, the 6-foot-9 power forward from Putnam Science Academy (CT), competed this past weekend at the Adidas Gauntlet DC event and attracted several high-profile suitors. Providence, Syracuse, UConn and Texas Tech are all in hot pursuit of the No. 9-ranked power forward in the Class of 2019 per 247Sports.com, while Akok also picked up an offer from Georgetown. He broke down several of his top schools: UConn: ‘They have a great in Dan Hurley and with Jalen Adams coming back next year, I feel like they could be strong next year. I’ve known [Coach Hurley] for a long time. He offered me when he was at Rhode Island.” Syracuse: “Gerry [McNamara] and [Jim] Boeheim are recruiting me. They said that coming in I would play a lot and they feel like I would play good in their zone defense.” Providence: “Coach [Brian] Blaney and Ed Cooley been recruiting me since last year. I took a couple visits up there, a couple unofficials, and I liked it. They said that I would be a very versatile player who would do a lot of different things for them on the court.” Texas Tech: “I like the coaching staff at Texas Tech. They have been recruiting me hard since my friend Malik Ondigo went on his official visit. I was able to go watch them when they played in Boston in the NCAA Tournament this year. I like how I fit their playing style. I’ve also heard great things about the player development at Texas Tech.” Akok said he Georgetown “just extended an offer this past weekend,” but he doesn’t know much about them. “Everybody knows about Patrick Ewing, what he’s done,” he said. As for Florida, which has expressed interest but not yet offered, “They’re a great school in the SEC.” Wherever he goes, he hopes to be a “versatile player who can do different things.” He has no plans to cut his list anytime soon and will pick “whatever school fits.” Said Putnam Science assistant Josh Scraba: “Akok has one of the most unique skillsets of any prospect in the country. He is an elite shot-blocker and an elite 3-point shooter. As he develops the ability to create his own shot and take guys off the dribble I see no reason he will not be considered a top 25 prospect in the Class of 2019.” Follow Adam Zagoria on Twitter And Like ZAGS on Facebook