Villanova's Bridges and Brunson, Michigan's Wagner could soon be headed to the NBA | Zagsblog
Follow @adamzagoria

Villanova’s Bridges and Brunson, Michigan’s Wagner could soon be headed to the NBA 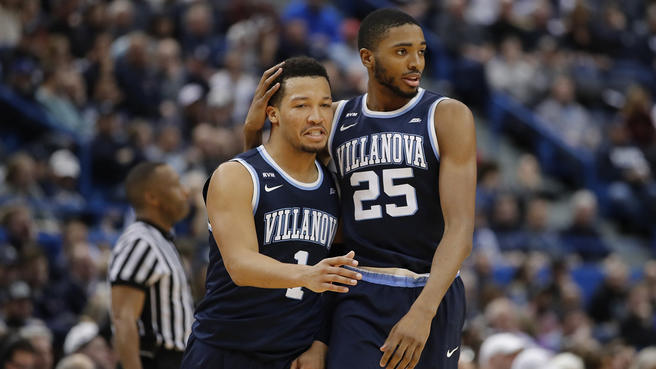 By ADAM ZAGORIA SAN ANTONIO — There hasn’t been a single one-and-done freshman featured in this Final Four, but that doesn’t mean some of these players won’t be in the NBA next season. Villanova junior wing Mikal Bridges is the projected No. 10 pick in the NBA Draft per ESPN.com, while his teammate Jalen Brunson has moved up to No. 31. Michigan junior forward Moritz Wagner is projected at No. 49. The 6-foot-7 Bridges is obviously the highest-projected pick and is expected to go in the lottery during the June 21 Draft at Barclays Center. Of the nine players projected above the redshirt junior per ESPN, eight are college freshman and the other is international star Luka Doncic. “He’s got a Scottie Pippen-like range and build about him,” ESPN’s Tim Legler said recently on air. “Now he’s making shots. If he’s gonna do that he’s gonna jump up into the top 10, maybe the top 6, top 7 of the NBA Draft if he elects to go.” For the season, Bridges is averaging 17.6 points and 5.3 rebounds, while making 101 three-pointers (39 percent). Bridges has been linked to the Knicks, who are currently slotted to pick ninth in the Draft. Knicks owner Jim Dolan, President Steve Mills and GM Scott Perry all watched Bridges when Villanova won the Big East Tournament last month at Madison Square Garden. “Mikal is a safe pick,” ESPN’s Fran Fraschilla told ZAGSBLOG. “Mikal is a safe pick because he’s already fits into the modern NBA game. He can defend multiple positions. He is an elite outside shooter and he comes into the league as a player who has a lot of growth in his game. From redshirt to now there’s been a dramatic improvement and he’s got the kind of character that he looks like he has even more room for development and growth.
“He has positional size, versatility, ability to defend and he projects to be an elite shooter at the NBA level. He’s an easy pick once you get in that 5-10 range.” Added one NBA scout: “Mikal is very talented and his trajectory skill-wise is on the way up. You could make an argument for him to get drafted anywhere after the top three.” Like Bridges, Brunson has done virtually nothing but win in his three years at Villanova. The 6-3 point guard was named the AP National Player of the Year after averaging 19.2 points, 4.7 assists and 3.1 rebounds this year. During his tenure at Villanova, he has a chance to win his second NCAA championship in three years and has already won two Big East regular-season and two Big East Tournament titles. Though there are questions about his defensive ability at the next level, Brunson projects as a longtime NBA point guard, potentially as a backup. He is generally seen as a second-round pick. “He has the highest basketball IQ in college ball and will play 12 years in the league,” a second NBA scout said of Brunson.
The 6-11 Wagner, meantime, has likely helped his stock here after his 24-point, 15-rebound, 3-steal performance in the national semifinals against Loyola-Chicago. He made 3-of-7 from beyond the arc and also grabbed 6 offensive boards. One NBA executive said he projects Wagner in the 25-35 range and said he’ll be a “backup five” in the league. Wagner grew up modeling his game after fellow German Dirk Nowitzki. The two met in February 2017 and on Saturday night, Nowitzki gave his protégé a shoutout.