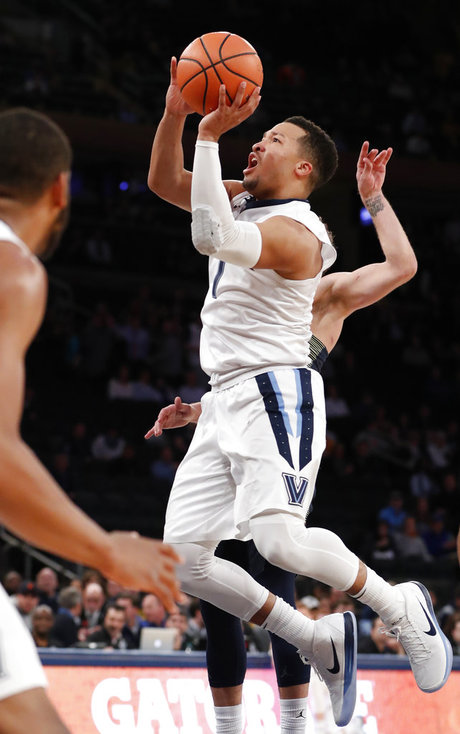 By AARON BEARD SAN ANTONIO (AP) — A long list of goals has taken up permanent space on Jalen Brunson’s wall, including becoming a conference player of the year, an all-American and helping Villanova win a second national championship in three seasons. The junior point guard just reached another one by becoming The Associated Press men’s college basketball player of the year. Brunson is being presented with the award Thursday at the Final Four, where the Wildcats will face Kansas Saturday in the national semifinals. He earned 36 of 65 votes from the same panel that selects the AP Top 25, with ballots submitted before the start of the NCAA Tournament. The award comes two days after Brunson was the leading vote-getter on the AP All-America first team. He’s the first Villanova player to win the AP award. “It’s written on my wall,” Brunson said of being an All-American and player of the year in an interview with the AP. “It’s something that I strived for but never really focused on. I just knew that the more team success that we had, the individual honors would come. I just really focused on what the team needed and how I could be a key contributor.” Oklahoma freshman Trae Young was second with 15 votes after leading the country in scoring (27.4) and assists (8.7). Arizona 7-foot-1 freshman Deandre Ayton earned seven votes after averaging 20.1 points, 11.6 rebounds and shooting 61 percent from the floor. Duke freshman Marvin Bagley III earned four votes after leading the Atlantic Coast Conference in scoring (21.0) and rebounding (11.1). All three of those freshmen have all declared for the NBA draft. The 6-3 Brunson is averaging 19.2 points and shooting nearly 53 percent while providing the unflappable leadership at the helm of the Wildcats offense.

NBA scout on Jalen Brunson: ‘Highest Basketball IQ in college ball and will play 12 years in the league.’ pic.twitter.com/zxMAjD3GYM

Coach Jay Wright can think of only one time — at Providence this year — when Brunson didn’t look like himself in a game. The rest of the time, he’s been as steady as they come. “He’s not afraid to look bad, he’s not afraid to fail,” Wright said. “That’s a big part of his confidence.” Brunson’s efficiency might be his most impressive quality. He’s shooting nearly 53 percent from the floor, 41 percent from the 3-point line and 81 percent from the line while rarely hoisting a bunch of bad shots. Brunson’s play, along with the rise of forward Mikal Bridges in an offense deep with shooters, helped Villanova spend a national-best eight weeks at No. 1 in the AP Top 25 this year on the way to earning the No. 1 seed in the NCAA East Region. “Our team has focused on being together,” Brunson said. “We haven’t really worried about anything else. We haven’t looked ahead at anybody. We just focused on the task ahead. It’s been fun. It’s something that you get to enjoy. “You can’t really go back and get to do this again. It’s the one time in our life we get to compete for something so special. Just to do it with those guys really means a lot.”