Mack says he has ‘big shoes to fill’ as Louisville coach 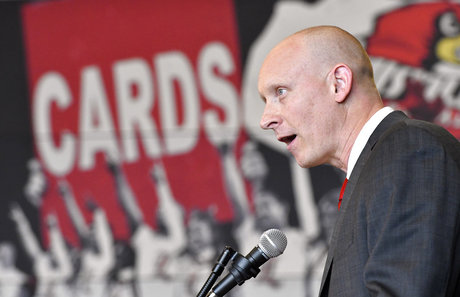 By GARY B. GRAVES LOUISVILLE, Ky. (AP) — Chris Mack understands he has big shoes to fill as Louisville’s new men’s basketball coach. He also knows he has some turbulent times to overcome. Now that Mack has been officially anointed the man in Louisville, it’s on his shoulders to lead the Cardinals back to prominence in the wake of several scandal-marred seasons featuring a federal investigation , sex scandal and two absences from the NCAA Tournament. “I know these past few months have been unbelievably difficult,” said Mack, who received a seven-year contract. “They say the darkest clouds, you miss it, the brightest lightning bolt. That lightning bolt is coming. “It’s not me; it’s those” players,” said Mack, who spent the last nine seasons at Xavier. “It’s time to turn the page and starting building something special once again.” Mack praised former Cardinals coaches Denny Crum, Rick Pitino and even recent predecessor David Padgett during a news conference Wednesday in Louisville’s KFC Yum! Center home arena. His hiring was unanimously approved by the University of Louisville Athletic Association and the Board of Trustees after reports Tuesday Louisville had settled on Mack to lead the program . The 48-year-old Ohio native takes over a team that went 22-14 under Padgett during a turbulent season in which Louisville became part of a federal corruption probe and missed the NCAA Tournament. Padgett had replaced Pitino, who was fired for cause by the ULAA in October in the investigation’s aftermath. Mack is encouraged about the future of the program even as the federal investigation still looms over the school and college basketball. It’s unknown if or when the NCAA will examine allegations that an Adidas executive paid the family of former recruit Brian Bowen to attend Louisville. Athletic director Vince Tyra said Monday that he didn’t expect updates any time soon, but Mack said it didn’t affect his decision. “I was told enough about it,” Mack said. “A lot of programs have been touched, and it’ll be interesting to see how it plays out. If it were a situation that would’ve scared me off, I would’ve said something to Vince.” Standing in a corner to Mack’s right as he spoke were a group of Louisville players that included juniors Ray Spalding and Deng Adel, both of whom plan to work out with NBA clubs before deciding whether to return to school. The players in attendance applauded the new coach and his family as they entered the news conference and appeared relieved to know someone will be in charge for a while following a lot of change since September. “It’s like, ‘Whoo!'” freshman forward Malik Williams said. “It feels good, just going through everything this year and knowing we’ve got somebody locked in and solid for next year. It’s just real good.” On Wednesday, the newly promoted Tyra was happy to announce his first major hire and fulfill last week’s vow to find a top-flight coach to lead what he considers an elite program. Mack brings an impressive record southwest down the Ohio River, aiming to continue his success with the Cardinals and lead them back into national contention. Mack, 48, was 215-97 with eight NCAA appearances, four Sweet 16s and an Elite Eight berth at Xavier. The Musketeers were 29-6 this past season and earned their first-ever No. 1 NCAA Tournament seeding, but were upset 75-70 in the second round by Florida State. His name soon surfaced after that loss as the favorite for the Louisville job that’s now his. The Cardinals’ third coach since September now must lead them back to the Big Dance and past two recent incidents — including an escort scandal that resulted in NCAA sanctions culminating in the vacation of 123 wins and their 2013 national championship and 2012 Final Four banners. “This person has to replace two lost banners,” Tyra said, looking toward Mack, “and he’s sitting on this stage.” ___
Follow Adam Zagoria on Twitter
And Like ZAGS on Facebook