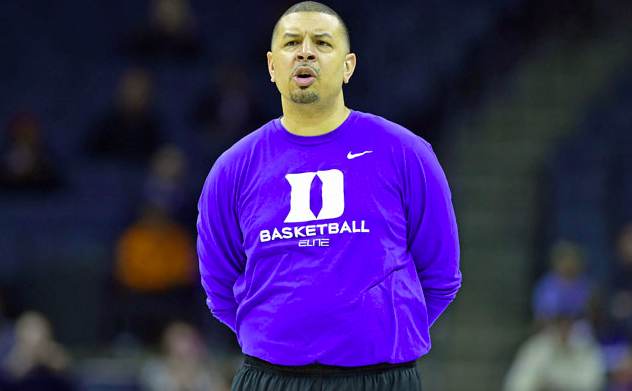 Pittsburgh on Tuesday named Jeff Capel its new head coach. The seven-year deal was first reported by 247Sports.com. “We are excited to announce Jeff Capel as our head men’s basketball coach at the University of Pittsburgh,” said AD Heather Lyke in a statement. “Coach Capel is a high-energy leader committed to being a part of our university and the city of Pittsburgh. He has a tremendous basketball pedigree and a strong track record of recruiting, developing and mentoring high-quality student-athletes. His relentless work ethic, passion for the game and clear vision of how to build a program capable of competing at the highest levels in the ACC and on the national stage are impressive. I look forward to our student-athletes, fans, donors and the Oakland Zoo getting to know Coach Capel and his family and watching this program flourish under his direction.” Capel has been apart of the Duke staff since 2011 and just wrapped up his fourth year of the associate head coach under Mike Krzyzewski. Before coming to Durham, Capel was the head coach at VCU from 2002-2006 and Oklahoma from 2006-2011. Capel served as head coach when Coach K was after undergoing back surgery. The Blue Devils went 4-3 with Capel manning the sidelines. “I am honored to be named the head coach of the University of Pittsburgh men’s basketball program,” said Capel. “Pitt has a great tradition of success and I look forward to putting together a staff and team that will enable us to build on that tradition. As a lifelong Steelers fan, I know Pittsburgh as the ‘City of Champions’ and our goal from day one will be to recruit, coach and develop champions on the court, in the classroom and in the community.” Said Coach K: “Pittsburgh just made an amazing hire to lead its men’s basketball program. Having come from a proud basketball family, Jeff Capel is one of the most dynamic coaches in the country. He possesses championship-level experience as both a head and assistant coach, as well as distinct knowledge of the Atlantic Coast Conference that will benefit Pitt immediately. On a personal note, I want to thank Jeff for being directly by my side for the past seven years and completely committed to our mission at Duke and with USA Basketball. His insight, passion for the game, relationships with our players, and most importantly, his friendship have meant the world to me and my family. Jeff, Kanika and their wonderful children Cameron, Sydney and Elijah will represent the University of Pittsburgh at the highest level and with the utmost class and integrity.” Pittsburgh fired Kevin Stallings earlier this month after two seasons where the Panthers finished last in the ACC including a 0-18 conference record this year. More than half of the roster is expected to explore transfer options, and only one recruit remains in the 2018 recruiting class. During his time at Duke, Capel played a key role in recruiting players like Zion Williamson, Harry Giles, Jabari Parker and Tyus and Tre Jones. “My lifelong journey around the game of basketball has taught me to surround yourself with great people that you believe in,” said Capel. “My meetings with Director of Athletics Heather Lyke and Chancellor Gallagher made a huge impact in the decision process. I was thoroughly impressed with their vision for the University of Pittsburgh, the athletic department and our program. I look forward to building outstanding relationships with the leadership team at Pitt as well as with the numerous individuals who will help shape our program.” Release: Pitt athletics Photo: CBS Sports
Follow Adam Zagoria on Twitter
And Like ZAGS on Facebook