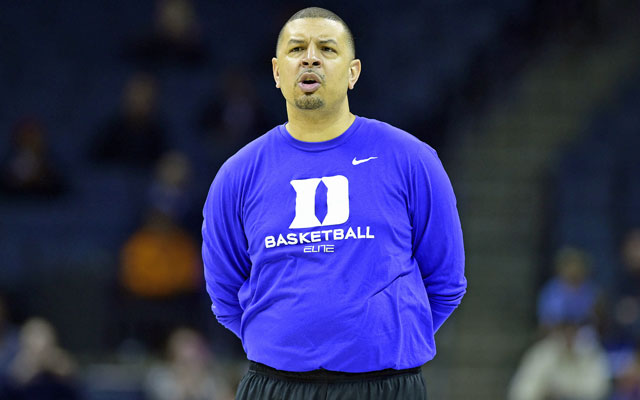 The Jeff Capel Era at Duke begins on Saturday against Boston College, and Capel has about a month to show he’s capable of one day succeeding arguably the greatest college basketball coach in the history of the game. No one knows when 69-year-old Mike Krzyzewski will coach his last game, but he won’t be on the sidelines forever. And Capel is the heir apparent to succeed Coach K once that day comes. Now with Coach K sidelined for about a month with back surgery, Capel has a golden opportunity — and a loaded roster — to show he deserves the job when that day does come. “I haven’t thought about it because I’ve never imagined the day of Coach [K] not coaching, of not being the head coach at Duke” Capel, 41, said Thursday on a conference call. “Since I started watching basketball, and really understanding basketball, he’s the only coach I’ve known at Duke. And so I’ve never thought about anything like that. I try to concentrate on doing my job and doing the best job I can for our program.” Capel has a 162-110 (.596) record as the head coach at VCU and Oklahoma. Despite an Elite Eight appearance and a 30-win season, he was fired by Oklahoma in March 2011 with the team standing at 14-18. “I want to be a head coach one day, but it’s not something that I’m in a hurry to do,” Capel said. “When the right opportunity comes, and if they want me, then I’ll go. But right now, my thought and focus is on our guys, solely on helping them and helping us be successful.” The last time Coach K missed time during the season with back trouble — in 1994-95 — Duke missed the NCAA Tournament. But that seems highly unlikely this time around. Duke, ranked No. 8 in the AP poll, features a Who’s Who of McDonald’s All-Americans who are all healthy now that freshmen Jayson Tatum, Harry Giles and Marques Bolden are in the rotation. Capel also has junior guard Grayson Allen back after Coach K lifted his indefinite suspension after one game. “Look, we have talent but that talent has to be together, it has to be connected,” Capel said. “And if we do that we can be  really, really good basketball team. We still feel like we have a very, very large ceiling to grow and figure out who we are together.” A year ago, when Syracuse head coach-designate Mike Hopkins stepped in during Jim Boeheim’s suspension for NCAA violations, Syracuse went 4-5. That led some to question whether Hopkins was ready to take over for Boeheim when Boeheim’s set to retire after the 2017-18 season. Boeheim defended Hopkins by saying that it wasn’t Hopkins’ team, it was Boeheim’s. “No matter what, whether it’s Coach K or Rick Pitino or Roy Williams or Jim Boeheim, the end is closer than the beginning for all of them,” ESPN’s Jay Bilas told me recently. “And so while I understand those that say just coach as long as you can or as long as you want to, all that stuff, that’s all great, but succession has to be planned. Something may happen where there’s a health problem or you have something that happens abruptly. But if you’re going to plan a transition, I think it has to be carefully planned.” Duke’s succession isn’t as planned as Syracuse’s. But Capel now has a golden opportunity to prove he’s a worthy successor to Coach K. Photo: CBS Sports Follow Adam Zagoria on Twitter And like ZAGS on Facebook